Fifteen years on, the muddling of religions remains. 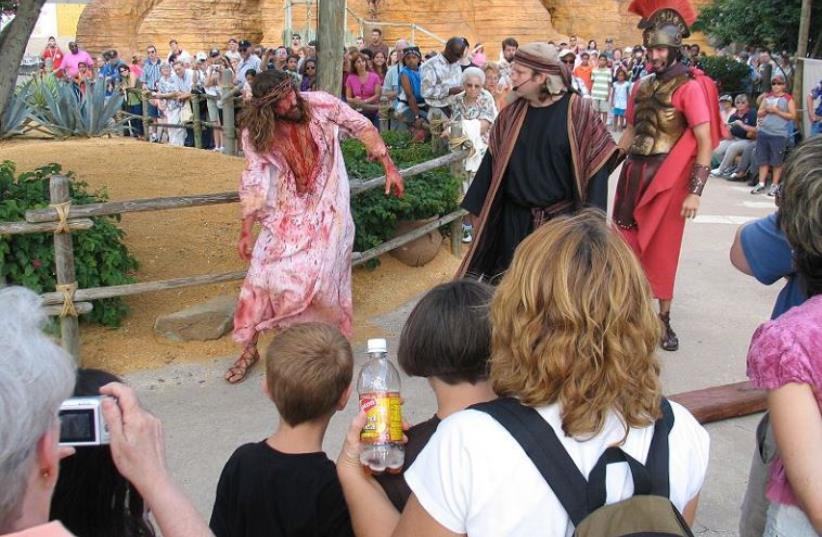 "Orlando crucif" by David Joyce from Gray, TN, United States - 2007 General Council
(photo credit: DAVID JOYCE/WIKIMEDIA COMMONS)
Advertisement
Mickey Mouse or Jesus Christ? That was the choice I faced on a recent trip to Orlando to write a pair of stories for JTA – one about kosher vacationing at Disney World, the other about the biblical theme park Holy Land Experience, which claims to take visitors “7,000 miles away and 2,000 years back in time.”My wife was skeptical about taking our children to a Christian theme park, but since a steady rain was falling, I convinced her to postpone Disney and join me at Holy Land. We’ll just focus on the Old Testament stuff, I told her.That was easier said than done. We drove up and immediately saw Jesus – larger than life, flanked by the wise men, towering over the 7-Eleven at the highway turnoff, just down the road from the Wet ‘n Wild water park. In the parking lot, we were surrounded by sculptures of trumpeting angels, scenes from Bethlehem and a life-size replica of a Jerusalem Old City gate inscribed with the Ten Commandments.Neither of us realized that the park exists to “proclaim the Gospel to as many people as possible and to help believers have a better understanding of the Judaistic roots out of which Christianity grew,” though the website makes that clear.When a security guard handed us a flier that says “Jesus saves,” my wife decided I would be visiting the Holy Land alone.“Shalom!” boomed the toga-clad man behind the counter, giving me a blank look when I responded with some Hebrew patter.“It’s 50 bucks for admission,” he said.“God bless.”The Holy Land Experience is a mix of life-size recreations and exhibits about the Holy Land some 2,000 years ago, along with a heavy dose of Christian evangelism, all tightly wrapped in a thick layer of theme-park kitsch.There are replicas of the ancient Temple in Jerusalem, a table where you can experience the Last Supper, a reproduction of the Bethlehem cave where Jesus purportedly was born, countless lifesize dioramas featuring New Testament scenes and several live shows daily starring Christianity’s leading man.The brainchild of Marvin J. Rosenthal, a Jew who became a Baptist minister, Holy Land opened in 2001. After the park’s opening, Jewish groups condemned the mix of Jewish and Christian themes and theology, saying it distorted Jewish history and religion.Fifteen years on, the muddling of religions remains. One 20-minute presentation featuring the Yom Kippur service at the ancient Temple in Jerusalem hews surprisingly closely to the talmudic accounting of the ritual. An actor appropriately named Aaron performs the service, sacrificing a bull at the tabernacle, entering the Holy of Holies and throwing incense upon the Ark of the Covenant.But then the show closes with a voiceover suggesting that the Yom Kippur atonement rituals are just a dry run for the arrival of Jesus, who would atone for mankind’s sins.Even by the standards of Orlando, the park – which the Trinity Broadcasting Network, a Christian television network, bought from Rosenthal in 2007 – is particularly garish. Staffers are clad head to toe in toga-like costumes. The buildings are coated in gold-colored paint. A plastic figure of John the Baptist looks vaguely like Beyoncé.Perhaps not surprisingly, there are Jesus sculptures everywhere. Here he is walking on water. There he is clad in a tallit (prayer shawl), hidden in the bushes.Here he is posing awkwardly with a little girl in front of a plastic peacock.Slogans proclaiming “He is Risen” are everywhere – scrawled in blood-like red, etched in ersatz stone, carved out of hedges.In the gift shop, grape juice from the real Holy Land and prayer shawls are for sale alongside communion wafers (not gluten-free, a label warns) and “Jesus loves you” pens. There are “Holy Land” wet wipes, “Holy Land” lip balm (made in China), Roman soldier fridge magnets. There are also $3 Star of David necklaces and kippot adorned with American and Israeli flags.I wandered into one exhibit, a model of Jerusalem circa 66 CE, complete with hundreds of five-centimeter figurines, pint-sized homes and a scale replica of the Temple. Four times a day, a guide narrates visitors through the model, explaining everything from Temple construction to “the events of the passion of the Christ.”When my guide, Thom, asked for questions at the tour’s end, I raised my hand.“So, who killed Jesus, the Jews or the Romans?” He paused.“It was a concerted effort,” Thom said. “The Jews wanted him dead, the Romans provided the means. No one had bloodless hands.”Fatigue started to set in and I needed a break. I headed past the Shofar Auditorium and into Esther’s Banquet Hall. Among the menu items: the Yom Kippur Plate (turkey barbecue, collards and cornbread), a Samson foot-long hot dog and Land of Milk (no honey), white or chocolate. A refillable souvenir cup was dubbed My Cup Overflows.I stumbled outside, sipping my drink under the sun that had suddenly emerged from the rainclouds. Hallelujah! There was plenty more to see, but the hour was getting late. I skipped past the Christus Gardens, past the costumed woman exhorting me to join an automated tour of the Scriptorium of biblical manuscripts and religious artifacts, and dashed through the Garden of Eden and into the parking lot.I sat down to wait for a taxi under the watchful gaze of you-know-who etched in marble, with a quote from Proverbs: “The eyes of the Lord are in every place keeping watch, upon the evil and the good.”When my cab finally arrived, the driver informed it would cost about $30 for the eight-minute ride back to my hotel.“Jesus!” I exclaimed. (JTA) Uriel Heilman is JTA’s senior writer and former managing editor. Follow him on Twitter at @urielheilman.