Arabs on roofs, Jews on hills

Please do not say “We do not negotiate with terrorists.” Israel does that all the time. Always too late, always after loss of too many human lives. 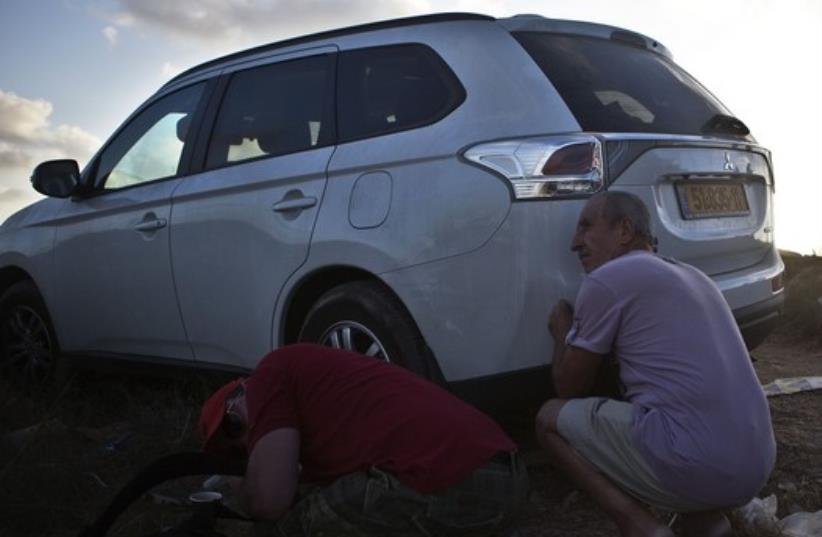 Some Israelis take cover as others look on as sirens indicating rockets being fired to the area are heard on a lookout hill near Sderot, opposite the northern Gaza Strip.
(photo credit: REUTERS)
Advertisement
The murderous symmetry of the Israeli-Palestinian conflict shows up in different times and different phases, and each phase is more brutal than its predecessors. In 1990, Scud missiles were launched at Israel during the First Gulf War by Iraq. Some Arab Israeli citizens climbed onto roofs to watch the missiles. Some of them were cheering. The party began. Even the Israeli leftists were shocked.The right wing was rejoicing; we told you, they said.Its understandable why some Arabs were happy, but it was by no means acceptable. This was the first time in the history of the State of Israel that its home front had been hit. This home front was always described by Israeli propaganda as “invulnerable,” as opposed to the “long arm of the Israel Air Force” that could hit any target in the Arab countries.Arab Israeli citizens, like the rest of the world, had witnessed this long arm too many times in action. Some were bombing elementary schools in Egypt. This is terror.Iraqi missiles made the demagoguery of the right-wing ideology collapse: no “strategic depth,” no “defensible borders.”Prime Minister Binyamin Netanyahu has claimed that Israel can never withdraw to the 1967 borders and remain secure since it will be impossible to protect Israel against Palestinian missile attacks. Iraqi missiles, Hezbollah missiles and even primitive Hamas missiles have proven Netanyahu’s theory is mere illusion.The best “defensive shield” of any nation is peace.I want to make my previous statement clear: the cheering of some Arabs when Iraqi missiles hit Israel in 1990 was completely unacceptable and unjustified. But if “Arabs on roofs” is unacceptable, the Jews on hills near Sderot that hail the Israeli bombardment of Gaza are not acceptable either. I fully aware of the fact that Sderot is the target of Hamas missiles, that Sderot residents live in distress, subject to constant danger. This is terror.But what about Gazans? What about the blockade that Israel is imposing on Gaza? One of the worst results of this blockade is that what for Israelis seem to be simple daily actions become a “once in a lifetime operation” for Gazans, and are most likely to be brutally interrupted by the IDF. The children from Gaza that were shot dead by three Israeli missiles are just one example, a missile for each child. The IDF gave the well known automatic justification: there were terrorists there. But if so, it is a witness against “the most moral army in the world,” because its accuracy is really poor: why were only children killed in this attack but not a single terrorist? This is terror.Well, here the national “mantra” will be immediately put in action: the IDF will investigate.Consequently, the collective conscience relaxes. Israel is a democracy.Dear collective conscience: you have to know that such investigations result mostly with no accusations, and when they do, the punishments are ridiculous.Supermodel Bar Rafaeli made her followers angry with one of her recent tweets. Rafaeli was trying to show her disgust at war and bloodshed: “There is no honorable way to kill, no gentle way to destroy. There is nothing good in war, except its ending.”Regardless of who said it, Rafaeli is right. Don’t we all hate war and want it to end? Are Jewish mother’s tears worth more or less than those of an Arab mother? The best thing about war is not letting it occur.Stop this unnecessary war on Gaza. Sit around the negotiation table. And please do not reply to me with yet another well known mantra: “We do not negotiate with terrorists.” The State of Israel does that all the time. Always too late, always after loss of too many human lives (not to mention infrastructure destruction), but it always happens. When Gilad Schalit was taken as a prisoner of war by Hamas, Israel tried to release by means of force but failed. And to make the well known long story shot, Schalit was released exactly according the terms of Hamas.A bloodier and more savage war was launched by Israel on Lebanon and Hezbollah in 2006 after Hezbollah took Eldad Regev and Ehud Goldwasser as war prisoners by Hezbollah fighters.Again the unbelievable scenario was repeated: Israel rejected all Hassan Nasrallah’s demands and started the Second Lebanon War.One million Israelis became refugees within Israel, 139 soldiers were killed, massive destruction in Lebanon and hundreds of victims there. And the result is: indirect negotiations with Hezbollah and the corpses of the soldiers were returned exactly according to Nasrallah’s terms. The huge “achievement” of Israel is that Nasrallah is hiding.Stop this evil war now. Human lives are being wasted. Talk. Do not fire.The author is a chemist and a teacher, 54 years old, married (+3) and lives in Wadi Ara.