The heavy price of false optimism

The important questions raised concerning the light rail for the city and its alignment through Arab east Jerusalem are not new. 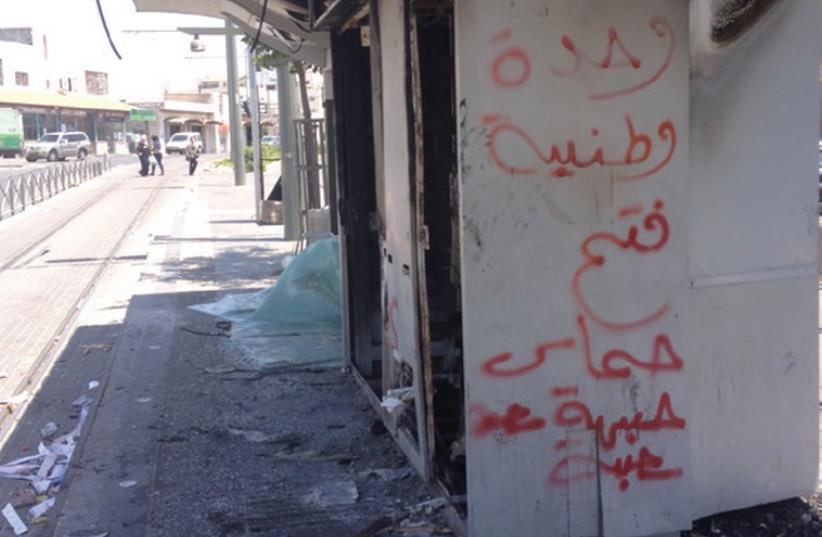 A damaged light-rail station in Shuafat.
(photo credit: SETH J. FRANTZMAN)
Advertisement
Few would doubt that this won’t be the last time east Jerusalem Arabs vent their anger by destroying elements of the light rail line.Following the murder by Jews of an Arab teen from the northeastern Jerusalem neighborhood of Shuafat, through which the Jerusalem light rail passes, rampaging masked Arabs caused severe damage to this section of the line. They poured concrete on the rails, tore out security cameras, burned ticketing machines, electrical and communication panel boxes and shattered the transparent panels that enclose the stations. Several days later they continued with more of the same.The damage caused is estimated by CitiPass, which operates the line, to run in the tens of millions of shekels.Many months will be required to repair it. As a result, eight of the line’s 23 stations, three of them serving the Arab population, are out of operation. Fully one third of the light-rail’s passengers (representing some 100,000 trips on weekdays) are presently without service. The large Jerusalem neighborhood of Pisgat Ze’ev is cut off (back to buses) and the work on the extension of the line to the Neveh Ya’acov neighborhood just north of Pisgat Ze’ev has been halted. Seven trams have been sidelined. Renewed service to this section of the line will require police approval.The problem of securing the light-rail line, especially along its route through east Jerusalem is one that many Jerusalem residents were concerned about long before the light rail went into operation in August 2011. Obvious to many was that Jerusalem could not at all be compared with other historic cities of similar size where light-rail systems had succeeded. Those cities simply do not face a similar security situation. But the line’s alignment is just one of a range of security issues tied to this system.The tramway’s route is fixed, its schedules and arrival times known. Unlike buses, trams cannot stop quickly in an emergency. The very large number of entry and exit points on each train makes securing them most difficult. The discovery of the smallest suspicious object or boulder in or close to the tram’s route can hold up service for hours.The important questions raised concerning the choice of this mode of transportation for the city and its alignment through Arab east Jerusalem are not new.Only now, less than three years after the line’s initiation, have they come fully into focus.There is every indication that several Jerusalem mayors and transportation ministers, on the advice of optimistic, arrogant and irresponsible transportation planners who grossly understated the seriousness of the security issues involved, made the wrong choice. The line was constructed at a snail’s pace, taking a full 10 years to complete.Its cost prior to opening: a staggering $1.4 billion. That figure will now have to be significantly revised.This brings us to today’s dilemmas. The state, with our monies, is slated to pay for the needed repairs and for insuring the safety of workers repairing the damage.The state, with our monies, will pay for the stoppage of the work on the extension of the line to the Neveh Ya’acov neighborhood – whose residents fought the extension from the start. Tensions between Arabs and Jews in Jerusalem have rarely been higher. There seems little doubt today that we, through the good offices of the state, will also pay for the damage done to the route by Arabs the next time, and the time after that.For the politicians, there’s no way back. It is highly unlikely that they will take the eminently logical decision to permanently shorten the route, leaving it to remain as it is, as such a decision would amount to an admission that the entire light-rail line project was a colossal mistake. After all, they touted the project as a symbol of the successful co-existence of Arabs and Jews in the city. It seems clear that the good of the residents of Jerusalem came last in their list of priorities.In light of the present situation it might be expected that, at the very least, Jerusalem Mayor Nir Barkat’s plans for extending the line to Neveh Ya’acov and constructing two additional ones should be re-examined. Public safety and security comes before all else. Or does it? The author is an architect and town planner in Jerusalem.