This Normal Life: Snub from Cairo

Ahmed, our tour guide, clearly didn’t know what to make of us; He definitely realized that something about this typical “American” family was odd. 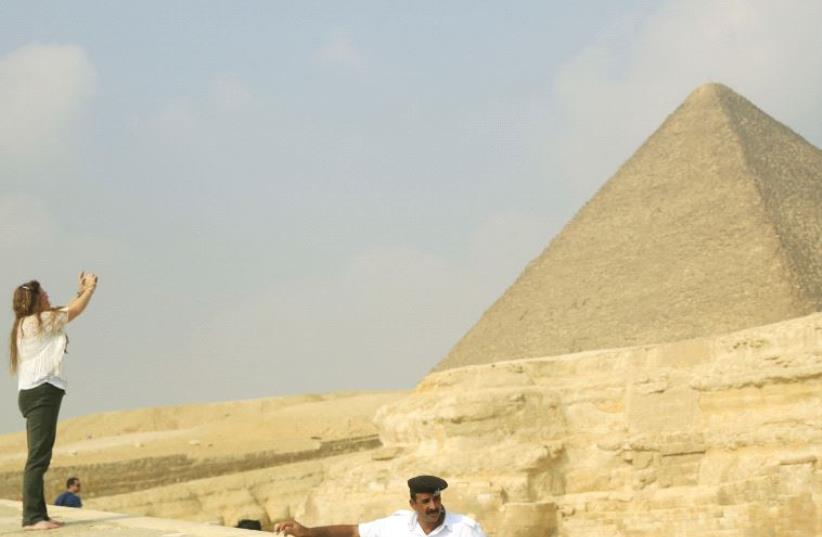 A tourist takes a photo of the Giza Pyramids on the outskirts of Cairo
(photo credit: REUTERS)
Advertisement
When Egyptian judoka Islam Shehaby lost to Or Sasson in the 100- kg. judo contest at the recent Rio Olympics, Shehaby demonstrably snubbed his Israeli opponent by refusing to shake hands, as is Olympics protocol (not to mention just plain good manners).This prompted outrage – not only in Israel, but at the International Olympics Committee, which reprimanded Shehaby, as well as by Egypt, which sent him home.Shehaby tried to spin the mess he’d created by saying he had “no problem with Jewish people or any other religion or different beliefs.” Rather it was the fact that Sasson was an “Israeli athlete” and not a “friend whom I must greet.”The slight highlights the gap that frequently exists between official diplomatic relations – Israel and Egypt have a peace treaty, after all – and the sadly less favorable opinions held by many individual citizens.As Stephen Flatow, whose daughter Alisa was killed in a terrorist bus bombing in 1995, wrote last week in the Times of Israel, a cease fire is “much better than gunfire. But a cease fire is a fragile thing. If it’s not backed by deep, wide-ranging societal support for peace, then it could be broken at any time.”It goes both ways, of course, and it’s not my intention to make a blanket statement about all Egyptians (or all Israelis for that matter).Still, the incident in Rio wasn’t entirely surprising to me. Eleven years ago, our family spent a week touring Egypt and had a similar experience.Ahmed, our tour guide, clearly didn’t know what to make of us. He definitely realized that something about this typical “American” family was odd.We showed a surprising amount of interest in Cairo’s Ben-Ezra synagogue, where our kids read the inscriptions in fluent Hebrew. Our strictly vegetarian diet (our way of keeping kosher while on the road) was way off the beaten track in meat loving Egypt.Most of all, our oldest son’s name was highly unusual.“Amir, that means ‘prince’ in Arabic,” Ahmed said. “Is that a common name in America?” We hadn’t concealed the fact that we were Jewish. But we nevertheless decided that we would travel on our US passports rather than our Israeli ones, and when asked where we were from, we would answer “California” (not entirely untrue since we moved to Israel from the San Francisco Bay area).Before our trip, an Egyptian friend – a software developer I have worked with in the past – assured us that Egypt was safe.“Just don’t go around with a big sign reading, ‘Hi, I’m an Israeli,’” he said.We decided to heed his advice.Together with Ahmed, we climbed the pyramids, ogled the Sphinx, marveled at the mummies in the Egyptian Museum and caught a glimpse of Tahrir Square, which had yet to become famous as an international flash point.Ahmed was knowledgeable, personable, took a real interest in the children and, when he wasn’t smoking like a chimney, demonstrated a casual worldliness that made us feel like maybe we could trust him with our “secret.”As we crossed the 6th of October Bridge, commemorating Egypt’s perspective on the Yom Kippur War, Ahmed decried violence of all kinds, stressing there were only losers in conflict. We were ready to open up.That is, until he addressed the elephant in the room.“You know, we Egyptians have no problems with American Jews like you,” he said unprompted. “But we really hate Israelis.”Not “dislike” or “not fond of,” but “hate.”We decided we’d remain closeted until the end of the trip.Upon our return to Israel, though, I was unsettled. I felt we had truly enjoyed each other’s company; that we could have become friends and not just customers given a bit more time. But that would require honesty.Ahmed had given us his email address; I decided to write to him and “confess.”“What would you say if I told you we were not only American but Israeli citizens as well?” I wrote.A full week went by without a reply.I fretted. Maybe he was leading a tour down the Nile without good cell-phone coverage, I comforted myself. Or maybe the time was not yet ripe to be so forthcoming.Finally, a message appeared in my inbox.The subject line read “Warm regards.”I was momentarily buoyed.“In answer to your question,” Ahmed wrote, “my feeling for you and your family was very good.” But then he added, “even though you are from Israel.”My hopes crashed as Ahmed continued.“And even though we got to know each other, this doesn’t change my position.”But I was not willing to let it end there. I wrote back, attaching several photos from our trip.This time, Ahmed’s response came the next day.“The photos are excellent. Your children are beautiful. Greetings to your wife and Happy New Year. I hope it is a peaceful one for all.”There was a PS “Could I use these photos on my website?” And another PS “If you know anyone else coming to Egypt from Israel, please tell them to bring some Israeli cigarettes. I collect them and I’ve always wanted a box with Hebrew on it.” The author is a freelance writer who specializes in technology, startups and the entrepreneurs behind them. More at www.bluminteractivemedia.com.