Parshat Truma – Where does the Torah come from?

An unusual item was placed above the ark that we would never have assumed should be there – the kruvim, or cherubim. 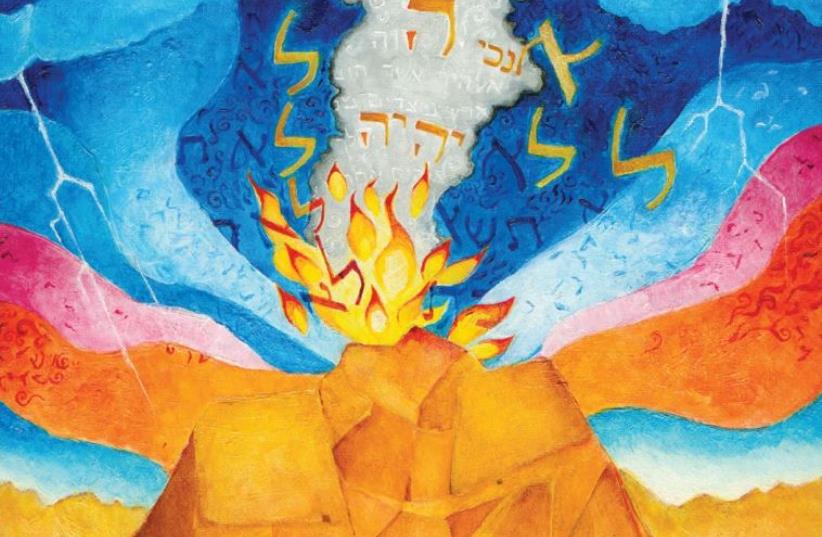 Illustration by Darius Gilmont, from the German-language ‘Torah for Children'
(photo credit: WWW.DARIUS-ART.COM/WWW.ARIELLA-VERLAG.DE)
Advertisement
At first glance, this week’s Torah portion looks like an architectural plan describing in great detail the design for the building of the Mishkan (Tabernacle) and its vessels.According to the plan – which later served as a model for building the Beit Hamikdash (Temple) in Jerusalem – the Mishkan was divided into three areas: The outer area, called the azara, served mainly for sacrificing sacrifices. The inner area, called the heichal, contained an additional altar, a table with bread, and the menorah. The third and most sacred area – which only the Kohen Gadol (High Priest) could enter, and only on Yom Kippur – was called Kodesh Hakodashim (the Holy of Holies) and it contained only one thing – the ark that held the two Tablets of the Covenant etched with the Ten Commandments that were given at Mount Sinai when the Jewish nation received the Torah. This ark was called Aron Ha’edut (The Ark of the Testimony) since it contained evidence of the Torah being given – the Tablets of the Covenant.An unusual item was placed above the ark that we would never have assumed should be there – the kruvim, or cherubim. Before we explain what the cherubim were, let us look at the verses from the Torah that talk about them: “And you shall make two golden cherubim... The cherubim shall have their wings spread upwards...with their faces toward one another... and I will speak with you... from between the two cherubim that are upon the Ark of the Testimony, all that I will command you unto the children of Israel.” (Exodus 25:18-22) The speaker in these verses is obviously God, and the person He is speaking with is Moses. If we are searching these verses for a clue as to the purpose of the cherubim, we can understand that the word of God to Moses comes from between them, especially those instructions that He is going to give the entire nation. In other words: The Torah comes out from between the two cherubim.Now let us turn to a deeper understanding of the essence and role of the cherubim. The sages of the Talmud provided us with one detail that hints at the message which they symbolize. They said that the faces of the cherubim looked like the faces of a young boy and girl (Talmud Bavli, Tractate Succa, daf 5). If we go back to the biblical description, we have a young boy and girl standing across from each other while facing one another. The association conjured up by this image is none other than young love.In another place, the sages of the Talmud expressed this clearly: “R. Kattina said: Whenever Israel came up to the Festival [to Jerusalem], the curtain would be removed for them [between the heichal and the Holy of Holies] and the cherubim were shown to them, whose bodies were intertwined with one another [embracing] and they would be thus addressed: ‘Look! You are beloved before God as the love between man and woman.’” (Talmud Bavli, Tractate Yoma, daf 54) If so, the cherubim represent God and the Jewish nation, and they look like a girl and boy embracing, and they symbolize the love of God for His nation.What we still need to understand is: Why does the Torah come out from between the two cherubim? The answer can be given on two levels: On the first, the Torah comes out of love. We must not see the Torah’s commandments as an onerous burden, but as directions given to us out of love. Even if there are commandments that we do not understand, we can trust the God who commanded them and did this out of infinite love, as is symbolized by the cherubim.On another level, we might say that the Torah is created from that same wondrous connection between God and the Jewish nation. When God and the Jewish nation are embracing, a wonderful Torah is formed, the Torah of life, a Torah that is both divine and humane, a Torah that expresses lofty ideas while getting down into little details about human weaknesses, providing direction for any situation, any place, and any time.The writer is rabbi of the Western Wall and Holy Sites.