“Only on a flight to Israel will people refuse to swap one aisle seat for another so a couple can sit together. #nationalcharacter #dickish.” 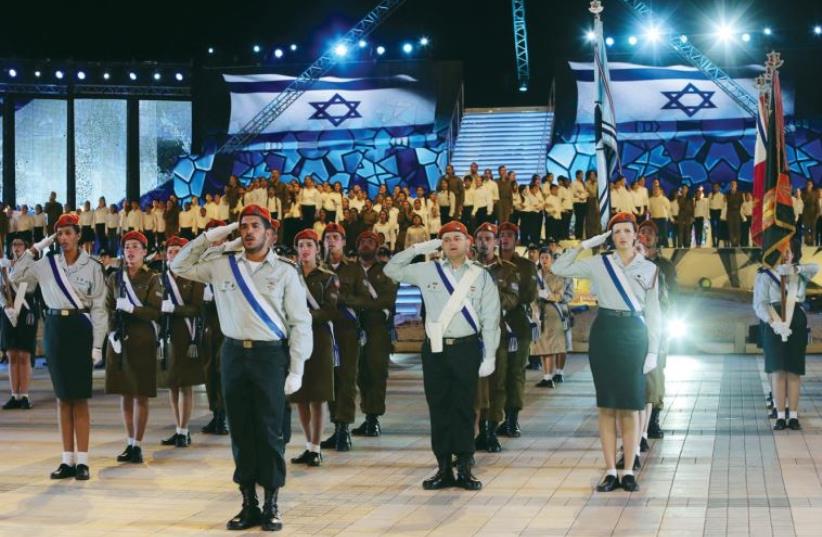 Independance Day ceremony
(photo credit: MARC ISRAEL SELLEM)
Advertisement
As we choose our own various ways to celebrate the state’s 68th Independence Day next week, there has been a renewed debate on Israel’s national character.The age-old sabra analogy – prickly on the outside, but peel away the layers and you find a delightful surprise – doesn’t really hold weight anymore, discarded to the nostalgic artifact junk pile along with Jaffa oranges and kova tembel hats.Who we are has evolved far beyond that charming but facile categorization that essentially launches an open season for us to behave like boorish louts, with the caveat “but I’m really nice once you get to know me.”What it comes down to is our “dickishness” quotient.That charming term trended last week, thanks to celebrated American Jewish novelist Ayelet Waldman, who, together with her husband and fellow novelist Michael Chabon and other leading writers, recently visited Palestinian cities and villages to see what effect almost 50 years of Israeli rule has had upon them.They saw what they wanted to see, and in the book of essays that will be published on the subject next year, they will undoubtedly write passionately and without a shred of objectivity on the plight of the Palestinians resulting from Israel’s victory in the Six Day War.But what rankled the Israeli- born Waldman just as much as what she perceived as Israel’s oppression of the Palestinian people came to light in an anecdote on her way here that she tweeted about.“Only on a flight to Israel will people refuse to swap one aisle seat for another so a couple can sit together. #nationalcharacter #dickish.”A short while later, she amended her declaration with another tweet: “And 2 b clear I say that out of love.After all, I share that national character. Life: a constant struggle to restrain inherent dickishness.”So is that who we are? All those lifesaving delegations to Nepal and Ecuador, all the altruistic endeavors taking place internally with volunteers of all ages, all reduced to someone who refused to switch airplane seats? It seems like no matter how nice we are, how many good deeds we do, how much we try to put our best face forward, we’re always going to be the arrogant Israeli. And if Waldman is correct, it’s an inherent part of our character.And we all know where it comes from – that national mantra that fuels it: Don’t be a freier (sucker)! Don’t underestimate the power of that simple phrase that permeates every facet of our lives in Israel.Last week, I lightly sideswiped a parked car in a shopping center lot. Getting out to inspect the damage, I noticed, along with many other nicks and dents all around the car, a bumper scrape and chipped parking light cover where the collision took place.A shopper who had witnessed the collision offered his two agorot in a typically Israeli way: “Don’t leave a note, you don’t even know if you caused the damage. The car is full of dents. Don’t be a freier.”Acknowledging that he was right in his analysis, I nonetheless left my phone number on the car’s windshield as a courtesy. Based on anecdotal evidence, this might have been one of the first times this phenomenon has taken place in the post-Mandate period.I half expected the car’s owner, who didn’t seem to mind the plentiful damage to the other bumpers, to be delighted by the note, have his faith restored in humanity and consequently throw my number away.Instead, she called. She wants the damage fixed.Instead of going through insurance (Is Israel the only place where you pay hefty premiums for insurance and then are afraid to use it?), I’m going to hear her body shop’s estimate. Of course, all I can think about is that they’re going to inflate the price, she’s going to include damage that I didn’t cause, and I am indeed a freier.I can understand where Waldman is coming from, because our daily life is full of it – the loudness, the brashness, the lack of personal space, the me-first attitude that typifies Israel, even outside of the Knesset. At the same time, there’s nobody you’d rather be with when your back’s against the wall or you need a favor.We’ve earned the paradox status. Yes, we can be the most caring, innovative and loving people on Earth. But we can also be dickish. In fact, like in our health, science and hi-tech prowess, we’re experts at it.Like the time a few months ago when I stood next to the bar at a Jerusalem venue watching and listening to another reason to be proud of being Israeli – the Tel Aviv musical powerhouse the Cut Out Club.Evidently I was blocking a patron sitting at the bar behind me. Instead of tapping me on the shoulder and politely asking me to move, he simply looked at me and caustically asked, “Tov lecha?” (Are you comfortable?). When I realized what he was getting at, I chuckled to myself and moved over a meter or so to give him his view back.Once, I would have been incensed at his sarcasm and passive/aggressive approach.But now I accept that attitude as being part and parcel of the full Israeli experience.As the country turns 68 next week, it’s time for us to embrace our dickishness – sing out loud and proud. This is who we are. Get with the program. If you encounter a warm and fuzzy moment from time to time, breathe it in, cherish it and move on.And when that car owner calls back with the damage estimate? If I see that she’s trying to take advantage of me, I’ll know how to answer.“Tov lach?”