Poland, me and Trump

In short, the question is, what happens if the Muslim and Arab world boycotts the West? 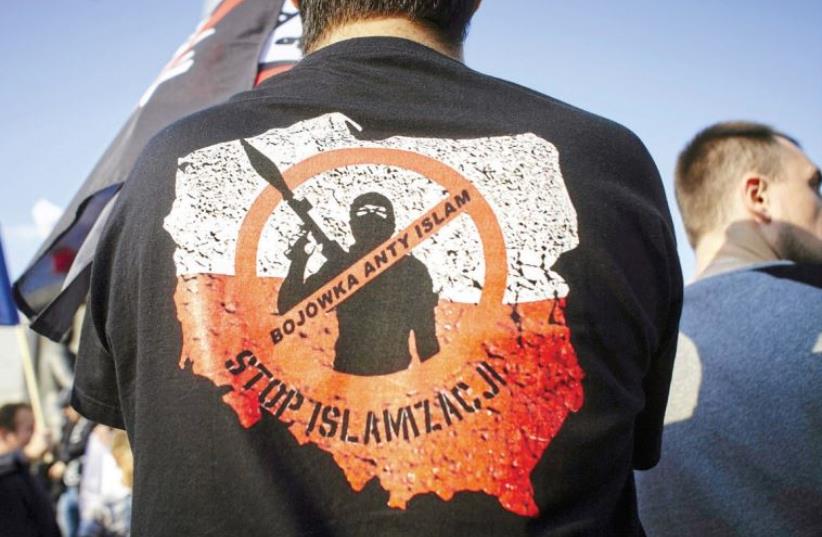 ACTIVISTS PROTEST against refugees in Lodz, Poland in September 2015. The words on the shirt read, ‘Anti-Islam militia. Stop Islamization.’
(photo credit: REUTERS)
Advertisement
Last Saturday between 6:21 p.m. and 6:43 p.m., I took tram No. 3 to Manufaktura in Lodz, Poland. Before the tram had moved, two tall, muscular Polish men (one bald, the other blonde) in their forties entered the first car, where I was sitting in the last seat near the door. The two seated themselves opposite me, although there were many empty seats.They started talking to me in Polish. I replied that I only spoke English. The blond man asked me in English whether I had “papers.” I didn’t get what he meant, so I asked him whether he meant cigarettes or money. He replied, “No!” Seeing a handkerchief in my hand, he pointed at it, saying that this was what he meant. I apologized that this was the last handkerchief I had.He replied “Okay!” and started asking me where I lived and why I was in Poland, whether I lived alone or with family, and when I would leave Poland. The questions seemed as weird and aggressive as the two men. But I had gotten used to such questions from the Poles of Lodz.I answered the questions, and the blond man translated for the bald one. Then the blond asked me my name. “Ahmed,” I replied.Upon hearing my name, the bald one got more outrageous, saying, “Kurwa [lit: whore, used the way fu** is in English], Ahmed.Kurwa.” Then, the blond said, “Leave Poland; go to the UK. They love Muslims and dislike Christians there; leave Poland, I don’t know why you’re living here.”I didn’t get frightened, but I tried to ignore them from this point. They started arguing in Polish. Then, when the tram stopped, the bald one approached me and pushed me out of the tram, kicking me in the stomach.Finding myself out of the tram, I didn’t think of fighting the two bigots. I just got into the second car. The passengers were looking at me, and I could see in their eyes they were wondering why this Pole had attacked me. “Racist!” I said. Not one of them said a word. Then I got off the tram at Manufaktura. When I looked at the first car, I found the two still in their seats.I reported the attack to the police.When I told one of my friends, a Canadian, about the incident, he said: “It’s terrible that people are treating you this way. You can at least rest in knowing that their treatment of you is wrong. You are a kind and gentle person, hardworking and progressive.You publish in Christian and Jewish settings things that involve humanity as one. So these people that harm you are the terrorists.... Clearly they do not understand that the heart of civilization is civility.”In fact, diversity, as George Lakoff states in his 2006 book Thinking Points, fosters meaningful communities and creates a range of opportunities for people to lead fulfilling lives. However, Europe, as Noam Chomsky said in a 2015 interview with the Turkish newspaper Daily News, is too racist. As Chomsky puts it, “Europe was [for example] offering Turkey the possibility of entering the EU. I never believed it myself because I think Europe is too racist.They don’t want Turks walking around in their streets. But they were making offers to Turks... If you look at what happened, every time some condition was made, even if Turkey met that condition, a new condition came. And by about 2005, it was becoming pretty clear that Europe is just going to continue to set up new barriers.And I guess... this led to a conception of ‘what is the point in trying?’ They are just a racist group and region, more so than the US in many ways.”I totally agree with this. Crucially, America is much more tolerant than Europe. In other words, diversity and openness are traditional American values, what Americans are proudest of in their country.The danger, however, is that US presidential candidate Donald Trump wants to deport 11 million undocumented immigrants and thinks he can. He wants to stop all Muslims from entering the US. What is going on? The answer, as George Lakoff says in his March 2016 Huffington Post article “Why Trump,” is that “many of Trump’s policy proposals are framed in terms of direct causation [dealing with a problem via direct action]. Immigrants are flooding in from Mexico – build a wall to stop them.For all the immigrants who have entered illegally, just deport them – even if there are 11 million of them working throughout the economy and living throughout the country....If a few terrorists might be coming with Muslim refugees, just stop allowing all Muslims into the country. All this makes sense to direct causation thinkers, but not those who see the immense difficulties and dire consequences of such actions due to the complexities of systemic causation.”Trump, like the Polish bigots who attacked me, expresses out loud everything he feels with force, aggression, anger, and no shame. This could impact not only America’s openness, but also America’s life.In short, the question is, what happens if the Muslim and Arab world boycotts the West? I leave the answer to the reader.Finally, my message to the criminals who attacked me is that: I swear I felt no fear, and I have no hatred against anybody in Poland. You cannot change who I am, and I will not leave the country; today, tomorrow and the day after tomorrow you will find me on tram No 3.

The writer is a visiting assistant professor of cognitive science and linguistics at the University of Lodz, Poland. He has published in international peer-reviewed journals like Metaphor and the Social World, and Visual Communication Quarterly.
Advertisement
Subscribe for our daily newsletter