Presbyterian New Year’s wish list: No state for the Jews?

Perhaps PCUSA can be excused for overlooking the consequences of the death of a Jewish state, since it has been just as blind to its own imminent demise. 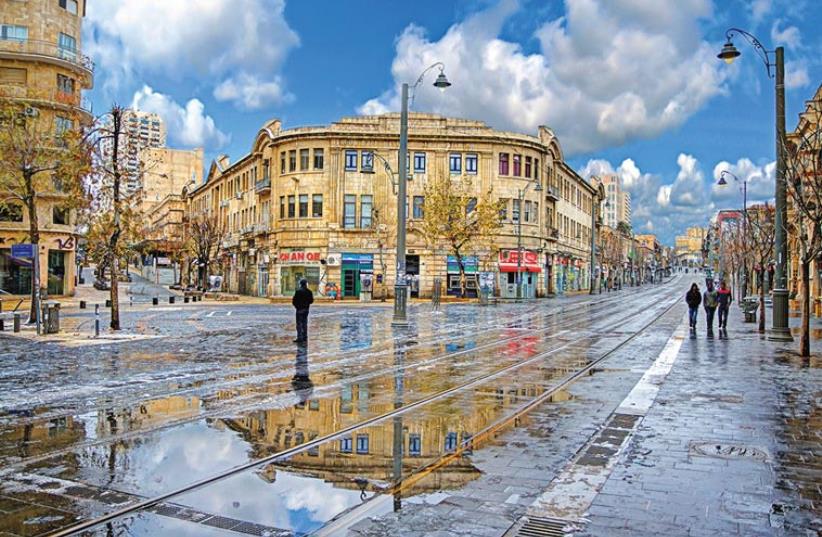 Our Jerusalem
(photo credit: SHARON GABAI)
Advertisement
As Jews prepare for the days of awe, the High Holy Days when the Heavenly Court sits to decide everyone’s fate for the coming year, a study team of the Presbyterian Church USA convened in Washington, DC, to decide whether Israel, home to the largest Jewish population in the world ought to be dismantled.Happy New Year, Jews!In June 2014, PCUSA’s General Assembly narrowly voted to divest from three US companies doing business with Israel, effectively becoming the first mainline Protestant church to align itself with the global Boycott, Divestment and Sanctions movement whose objective is nothing less that planting a Palestinian flag in the corpse of a delegitimized Israel. Now, in parallel with the Palestinian Authority President Mahmoud Abbas’s threat to void the Oslo Accords that had set a two-state solution as its goal, these religious activists openly promote the end of a Jewish state.This is hardly the first show of hostility that PCUSA has shown to Israel. It was first in passing a divestment measure a decade ago. It voted last year to remove the word “Israel” from prayers that used the biblical term; it has tolerated overt anti-Semitism on the pages of its Israel Palestine Mission Network; some of its leaders met in friendship with officials of terrorist Hezbollah.In 2014, PCUSA approved a stealth resolution that called for denominational study of whether PCUSA’s support for a two-state solution in the Holy Land should be abandoned. Now the Advisory Committee on Social Witness Policy readies itself to recommend to the next General Assembly whether to embrace a so-called one-state solution.There is no wiggle-room concerning the consequences of a one-state solution. Combined with a right of return for millions of Palestinians living for decades in Muslim countries, Jews would quickly become a minority in their own land. The lone Jewish state would cease to exist, its inhabitants left as secure as the Yazidis or Christians in Iraq.Think of it. With the entire Middle East imploding; with historic Christian communities being ethnically cleansed; with Islamic State on the rampage; with war criminal President Bashar Assad still sitting atop his Damascus perch; with hundreds of thousands of Arab and Muslim migrants overwhelming Europe – PCUSA activists find the moral courage to embrace a path that will guarantee more chaos, more terrorism, more crimes against humanity and genocide.Here are some facts. Were it not for Israel’s presence on the West Bank, Hamas would take over in a heartbeat. Does anyone doubt the consequences for Jewish communities on both sides of the former Green Line with Hamas unleashed without an IDF to intervene? Does anyone doubt that Islamic State and its Sinai-based allies would unleash their unique brand of mass murder on any Christian, Jew or Muslim standing in their path? And how many Jews could survive in the northern part of the Holy Land as Iran’s lackeys attacked from Lebanon and the Golan Heights?Does anyone in their right mind believe such a scenario would actually benefit Palestinians – or only guarantee the end of the Jews and the Islamization of the Holy Land?The PCUSA machinations take place as anti-Semitism roars across Europe, taking Jewish lives and endangering entire communities across the continent. Many of these Presbyterians apparently see no need for a Jewish homeland, but Vice President Joe Biden has. Last Rosh Hashana, speaking of threatened Jews, Biden declared, “There is no other place to go.... There’s only one guarantee, and that’s the State of Israel.”Perhaps PCUSA can be excused for overlooking the consequences of the death of a Jewish state, since it has been just as blind to its own imminent demise. This storied American denomination was once a powerhouse, overrepresented on Capitol Hill. More recently, however, it has been in a state of steady decline. Hundreds of churches have left, upset with the way PCUSA leadership has steered the denomination – theologically and politically – into corners that are unpopular with the laity. Now there is a group of former commissioners who voiced their complaints about the way anti-Israel forces engineered the 2014 divestment vote. They submitted a paper that “documents the grossly one-sided amount of time that was given to the pro-divestment position as well as other irregularities that slanted the playing field in a pro-divestment direction.”A most prominent theme of the High Holy Days is the prayer that God will be acknowledged by all people, not just Jews. (The Rav, Rabbi Joseph B. Soloveitchik used to say that if non-Jews knew what we prayed for on Rosh Hashana, they would rush to buy all our mahzorim [holiday prayer books].) Our prayers included our many friends among the PCUSA faithful. We hope those dissenting voices of reason and decency within this Church will prevail. Short of that, we will continue through the year to beseech that God save us from the sins of PCUSA through a strong Jewish state.The writers are an associate dean and the director of Interfaith Affairs respectively at the Simon Wiesenthal Center.