Preventing the next Gaza war

Over the past months some of our politicians and military folk have been speaking about the need to confront the economic and environmental disaster facing nearly two million people in Gaza. 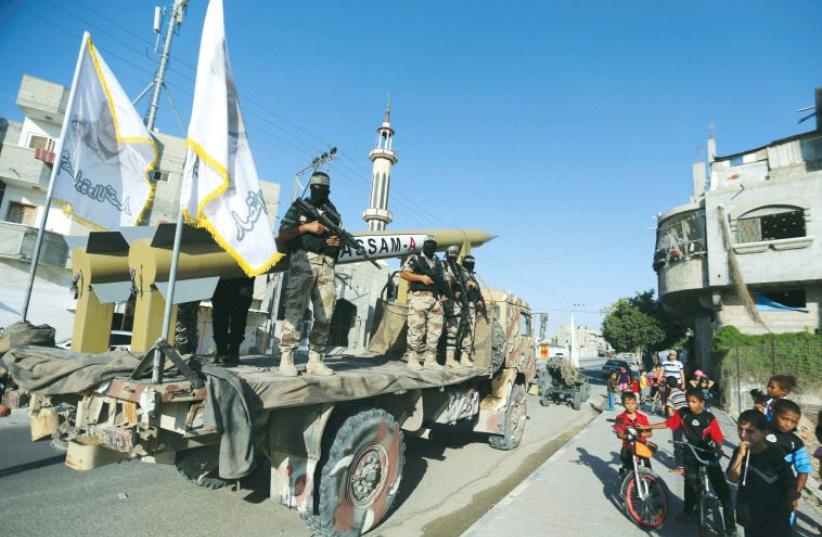 PALESTINIAN MEMBERS of a Hamas unit parade in Gaza on Sunday
(photo credit: REUTERS)
Advertisement
The sudden burst of renewed violence which entailed a rocket from Gaza to Sderot and a massive Israeli retaliatory attack should remind us all that the question regarding the next Gaza war is not “if” but “when.” Strategically nothing has changed in Gaza since before the summer 2014 war. Then Israel’s government decided that among its strategic goals for the war was to leave Hamas in power. This was definitely achieved. Not only was Hamas left in power, but its military wing Izzadin Kassam’s power was strengthened. There was almost no one then, except for Defense Minister Avigdor Liberman, who advocated bringing Hamas control of Gaza to an end.It was understood then as now that the cost to Israel of forcing Hamas out of power would be reoccupation of Gaza by Israel. Responsible people in the government and in the national security establishment could not support the re-occupation of Gaza and so they adopted the notion of “deterrence” as the backbone of Israel’s policy regarding Gaza. Now with Liberman at the helm in Defense Ministry, nothing has essentially changed. The normal retaliation by Israel after a rocket is fired from Gaza was enhanced with a new does of “deterrence,” with Israel striking 50 targets instead of the normal two to five per rocket fired. The army was careful to limit the chances of uncontrolled escalation, as in 2014, by not killing anyone in Gaza even in striking 50 targets.Over the past months some of our politicians and military folk have been speaking about the need to confront the economic and environmental disaster facing nearly two million people in Gaza. In 2007 Israeli geniuses cooked up the policy of “isolation” of Gaza in order to pressure the public to overthrow Hamas. The isolation of Gaza was supposed to be magnified by creating a dramatically better situation in the West Bank, including moving the West Bank toward statehood. A lot of progress did in fact take place in the West Bank and compared to three wars in Gaza during this period, the West Bank looked like paradise. But following the lack of political progress and economic stagnation in the West Bank, in addition to a political regime which has lost legitimacy in the eyes of its people and a lack of will in the international community to take on Israel and its occupation and settlement policies, the reality in the West Bank is hardly inspiring for anyone – in the West Bank and in Gaza.The policy of isolation is a dramatic failure and the situation for the people of Gaza has destroyed any sense of hope and desire to live. Youth unemployment is Gaza is above 60 percent and over 100,000 university graduates have no chance at a better life. The water situation is on verge of a humanitarian catastrophe and raw sewage spills into our shared sea because of lack of power to run the treatment facilities. People in Gaza have electricity for six hours at a time and there is no economic or political horizon for anyone.This week, Brig. General Mike Herzog (yes, Zionist Union leader Isaac Herzog’s brother), previously head of the IDF’s Strategic Planning Division and chief of staff to Israel’s defense minister, in a policy paper for the Washington Institute stated, “It is time that all major international and regional stakeholders work more diligently to ease the pressure in Gaza and mitigate the risks of yet another violent eruption.”No, General Herzog, it is not the responsibility of the international community or even regional powers. It is the responsibility of Israel mainly, and Egypt could also do a lot to help.Yes, it is true that Israel allows hundreds of trucks of goods to enter Gaza everyday (of course much of those goods are Israeli and the Israeli economy profits from this). What is almost never mentioned is that almost nothing gets out of Gaza. The fastest remedy to Gaza’s economic woes is to end the failed policy of isolation and to reconnect Gaza to the economy of the West Bank, to Israel and to the world. Instead of bringing tomatoes from Turkey as Israel has done over the past weeks, tomatoes can once again be brought from Gaza.And not only tomatoes. Gaza’s economy was linked to that of the West Bank and to Israel in the past. There is no chance for the economy of Gaza when it is cut off from its natural markets of Israel and the West Bank.Reconnecting it will not turn Gaza into Singapore, but it is the first remedy to putting Gaza’s people back to work.It is not a security issue. Israel has full control of the border and every truck leaving Gaza can be checked inside and out. Instead of talking about building artificial islands off the coast of Gaza, a seaport and major infrastructure projects in Gaza that are likely never to happen and will cost billions of dollars that no one want to give, relinking Gaza to the world through Israel and through Egypt is the cheapest, the fastest and the more secure solution, and no one but Israel has to make the decision about its implementation.The author is founder and co-chairman of IPCRI, the Israel Palestine Creative Regional Initiatives. www.ipcri.org.