We must give credit to Prosor for sticking it out on this planet, this parallel universe where the laws of right and wrong, good and bad, are suspended. 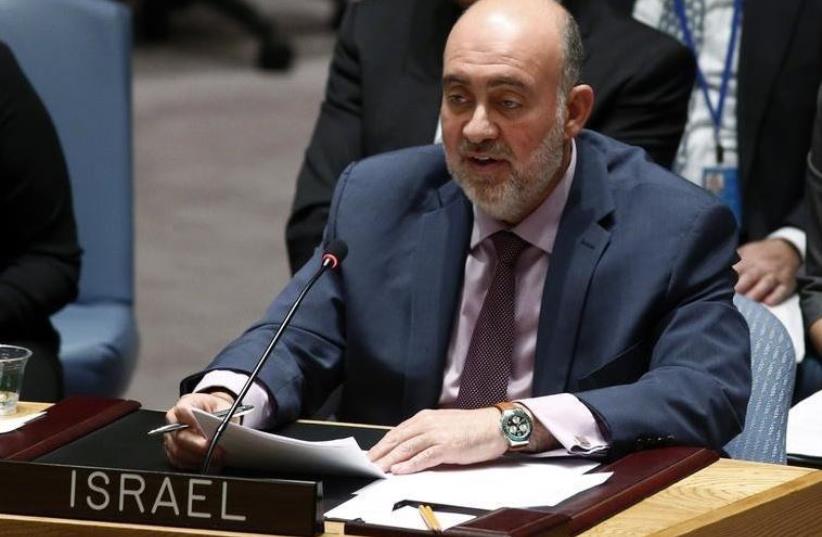 Israel's outgoing ambassador to the United Nations Ron Prosor
(photo credit: REUTERS)
Advertisement
On his last day as ambassador to the UN, Ron Prosor was at it again, engaging in the Sisyphean task of convincing the nations of the world to give the Jewish state a fair shake.While Secretary-General Ban Ki-moon expressed concern and condemned Israel for killing Palestinians – including knife-wielding terrorists killed while attempting to murder Israelis or after succeeding in murdering them – he has so far said precious little about lethal Palestinian violence directed against Israelis.Though Prosor over the past four years as ambassador has grown irreconcilably pessimistic about redeeming the UN, he nevertheless gave it one last shot.He called on Ban to denounce the recent attacks against Israeli citizens “in a clear and unequivocal manner.”The international body should “take immediate action against the incitement, violence and terror currently being waged against the people of Israel,” Prosor demanded.“Israelis are being attacked and murdered in the streets in their vehicles and even in their homes, and the UN stands by in silence. As my final act as Israel’s ambassador, I wish to stress the urgency of this situation that requires immediate action.”In an interview with Channel 2 News that was a retrospective on his four years at the UN, Prosor noted the dissonance he felt. On one hand, America is home to the largest and most politically influential Jewish community in the world, and Americans are the most pro-Israel nation in the world. Yet, because most of his time was spent at the UN, Prosor felt he was living in a parallel universe. The laws applicable outside the building simply did not apply inside.Of the 193 nations that are UN members, fewer than half are democratic. Fifty-seven are Islamic nations.A large percentage of nations – from Latin America to Africa to Europe – are openly antagonistic to America, Israel’s biggest ally. And even if there was no anti-Semitic sentiment that dictated prejudices against the Jewish state, the very fact Israel is aligned with the US would undermine Israel’s standing in the UN. Combine hatred for everything American with old and new tropes of Jew hatred and the result is the atmosphere at the UN.In no other UN institution is the cynicism and hypocrisy more pronounced than in the so-called Human Rights Council. China, Cuba, Pakistan, Russia, Syria, and other human rights luminaries are given special honors. Just recently it emerged that Saudi Arabia was awarded a special honor by the UNHRC. The Saudis were chosen to head a five-member group of ambassadors known as the Consultative Group, which has special powers to appoint. The UNHRC conveniently overlooked that thousands of political prisoners are being held in Saudi jails for expressing their opinions; that torture and capital punishment are used flagrantly; that women are ruthlessly oppressed.Meanwhile, Israel is regularly singled out for special condemnation. The UNHRC’s agenda Item 7 dictates that Israel’s purported human right violations must be raised and discussed every single time the UNHRC convenes. Not only are more UNHRC condemnations made against Israel than any other single country in the world, more are made against Israel than against all other countries combined.As Prosor noted in his farewell speech, “In my four years, I’ve seen hypocrisy, I’ve seen duplicity, I’ve seen triple standards – one for democracies, one for dictatorships and a special standard designed only for Israel.”As one Foreign Ministry official put it in an interview with The Jerusalem Post, “This is the planet, these are the rules and it is what it is.”We must give credit to Prosor for sticking it out on this planet, this parallel universe where the laws of right and wrong, good and bad, are suspended. One can only wonder what gave him the fortitude to persevere.He must be relieved to be leaving. He can now return to his wife and three children who remained in Israel during his four-year stint.We wish Danny Danon, Prosor’s replacement, much success. Indeed, Danon’s outspoken, pull-no-punches rhetorical style might be precisely what is needed to shake the UN up a little bit. But don’t expect any epiphanies.