Reality Check: Stopping terrorism is not an end goal

Israel will only prosper when it fully disengages from the West Bank. 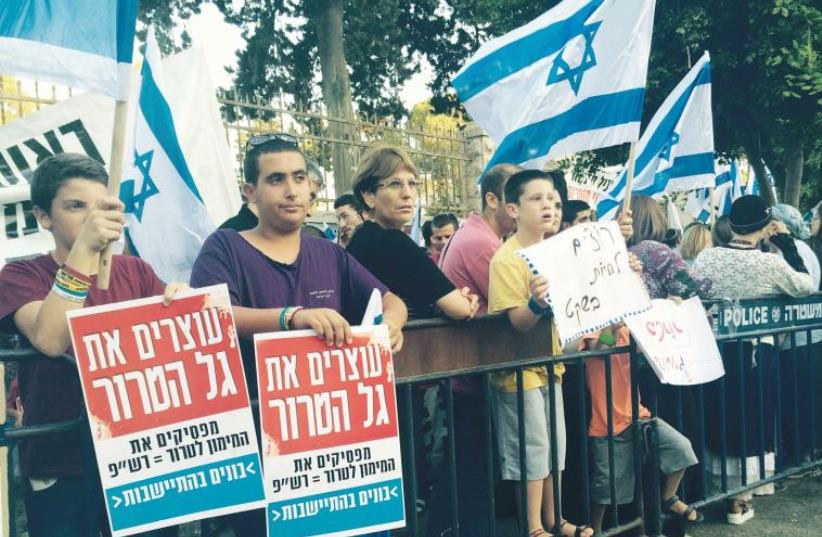 ‘CUT OFF the funder of terrorism, the Palestinian Authority,’ the printed signs read in part at yesterday’s protest.
(photo credit: HANNAH SARISOHN)
Advertisement
As we approach next month’s 20th anniversary of the murder of Yitzhak Rabin, the gulf between what might have been and today’s reality becomes ever clearer. This is not to claim that had Rabin not been assassinated, peace and love would have broken out between Israel and the Palestinians.Indeed, it is far from obvious that Rabin would even have won the general election slated for 1996 given the wave of Palestinian terrorism that marked that period.But had Rabin lived and prevailed over Benjamin Netanyahu in those elections, it is fair to assume that we would not have seen a staggering 264 percent increase (from 110,000 to approximately 400,000) in the number of Jews living in the West Bank since the signing of the Oslo Accords, a population growth that only serves to drive a possible agreement further and further away. Rabin’s disdainful view of the settler movement is well known, and the archive footage recently publicized in the new film Rabin: In His Own Words shows just how prescient he was.Back in 1976, he told an interviewer: “I see in Gush Emunim [the ‘Bloc of the Faithful,’ the ideologically driven founders of the settlement movement] one of the most acute dangers in the whole phenomenon of the State of Israel... Gush Emunim is not a settlement movement. It is comparable to a cancer in the tissue of Israel’s democratic society. It’s a phenomenon of an organization that takes the law into its own hands.”Today, almost 30 years later, the next generation of settlement leaders have continued on the same path. Despite an Israeli commitment not to build new settlements as part of the Oslo Accords, followed by Ariel Sharon’s promise to the Bush administration to halt new settlement activity, the settler movement, with the cooperation of different government ministries, has nevertheless built illegal outpost after illegal outpost, with the full intent of preventing any future Israeli withdrawal from the West Bank and making life more unpleasant for the Palestinians living there.And in this, the settlers have been repeatedly encouraged by Netanyahu’s different administrations over the years, all of which have attempted to whitewash and “legalize” many of these outposts.Such actions clearly show the hollowness of Netanyahu’s Bar-Ilan speech in which he talked of adopting the two-state solution. As Rabin noted in his 1976 interview: “I don’t think it’s possible to contain [Jewish settlement] over the long term, if we don’t want to get to apartheid, a million and a half [more] Arabs inside a Jewish state.”IN FACT, some would argue that we’ve already reached that point. In response the recent wave of Palestinian stone-throwing, which proved lethal in the case of Alexander Levlovitz, many on the Right have called on the IDF to shoot stone-throwers on sight. As a senior IDF officer sarcastically noted in an interview in this weekend’s Yediot Aharonot, if such an order is given “we will of course also enforce it on Israelis who throw stones. After all, in our country, everybody is equal before the law. By the amount of stones thrown by Israelis on Arabs [in the West Bank] this week, the IDF should have killed 200 Jews.”And while the Israeli security forces were admirably quick to identify and capture the heinous murderers who gunned down Na’ama and Eitam Henkin in front of their four children, the Jewish terrorists who killed three members of the Dawabsheh family by firebombing their house in the Palestinian village of Duma are still at large. This, according to Defense Minister Moshe Ya’alon, is because although the security forces know who was responsible for the deadly attack, Israel does not want to bring them to justice so as to avoid exposing intelligence sources.While the Northern Branch of the Islamic Movement in Israel is stoking tensions over the Temple Mount, Netanyahu is being disingenuous when he claims Israel is not seeking to change the status quo there. Under his premiership, there has been an ever-increasing number of senior politicians and ministers ascending the Mount to assert Israeli sovereignty there, despite the disastrous consequences of Ariel Sharon’s visit to the compound in 2000, which ignited the second intifada.This July, Housing and Construction Minister Uri Ariel ignored Israel’s real housing shortage and fanned the flames of unrest by calling for the building of the Third Temple on the Mount. Last month, again neglecting his day job, Ariel once more visited the site and told reporters “The Temple Mount is the holiest place for the Jewish people, and must be open for prayer at every hour to every Jew.” Despite such deliberately provocative behavior, Ariel is still a member of Netanyahu’s government.The prime minister’s belated decision last week to ban all MKs from the Temple Mount is a step in the right direction, but for as long as Netanyahu narrowly views ending the current wave as terrorism as his end goal, we are doomed to repeat it in the future. As Rabin understood, Israel will only prosper if it manages to fully disengage from ruling over millions of Palestinians in the West Bank and removes those settlements throttling any prospect for peace.The writer is a former editor-in-chief of The Jerusalem Post.