Rethinking our vision of peace

A peace treaty between Israel and the Palestinians – and by extension, the Arab world – will simply represent an end to official conflict. 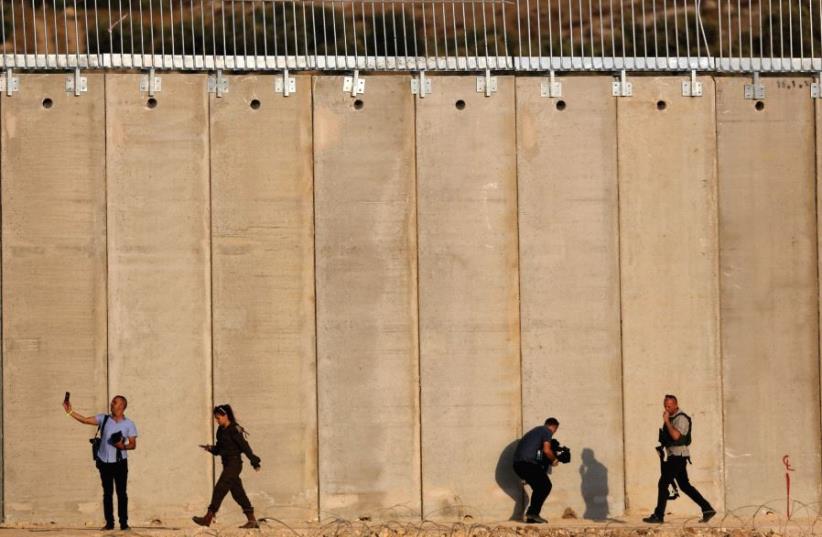 Security personnel walk in front of the barrier with the West Bank near Havat Ella, 20 km. southwest of Hebron.
(photo credit: REUTERS)
Advertisement
The Israeli shift in rhetoric away from the term “peace” is well-documented and apparent in today’s discourse. Commanders for Israel’s Security, an organization pushing forward for a security-based plan for two states, operates under the clear agenda of separation, not peace. Darkenu, the leading grassroots moderate camp of today’s Israeli civil society, does the same.The two groups are co-hosting this Saturday night’s Rabin Memorial Rally in Tel Aviv under the “We Are One People” slogan, reflecting a decision to not put “shalom” at the center in the event and to attempt to best mobilize the broad Israeli political center.So as “peace” and “shalom” terminology is perhaps a casualty of the failed 1990s peace process and now a bench-marker for shifting Israeli public sentiments, it is time for the American Jewish community and policy-making sphere to follow suit and adapt its perspective away from its existing utopian, idealistic vision.A peace treaty between Israel and the Palestinians – and by extension, the Arab world – will simply represent an end to official conflict. It will not usher in an immediate kumbaya paradise in which all tribes and peoples of the Middle East join together in embracing one another and their different narratives. Even under the ideal package, one that grants Arab-Israeli normalization and regional security coordination in return for Palestinian sovereignty, there will not be scores of Israelis eager to vacation in Qatar or Jordanians professing their deep appreciation for the Jewish people.Having just returned from a seven-day public tour with the Israel Policy Forum, Commanders for Israel’s Security, and the Center for a New American Security in New York, DC, Chicago and Los Angeles, I can attest that this distorted vision of peace remains prevalent today. Its tangible impact is that it sets an unrealistic condition for what a peace process should guarantee, creating a major public obstacle facing leaderships on all sides.Among the recurring questions posed throughout this recent speaking tour that exemplify public opinion: How can Israel negotiate with the Palestinians who hate Israel and all it stands for? How can peace ever come when antisemitism in the Arab world is so rampant? Or something like, Israel should not do anything until the Palestinians fix their textbooks and stop referring to 1948 as the “nakbah!” These questions and positions are not surprising, but they delineate how dangerously high the bar is set for any future negotiations.A starting point for addressing this phenomena lies in not only analyzing our contemporary definition of peace, but understanding that demanding the “victory” of the pro-Israel narrative is counterproductive to an end-of-conflict treaty. Too many in our community think that peace for Israel will only come when the Arabs surrender their narrative completely.Anyone who understands politics, demographics or even sociology can see how detrimental this perspective is to reaping any sort of positive results for Israel, both politically and on the ground. If Menachem Begin and Yitzhak Rabin had waited for the Egyptians and Jordanians to embrace Zionism before signing their respective peace treaties, Israel’s borders would be even more contested and less secure than they are today.This week, I, along with hundreds and hundreds of other Americans, also had the privilege to hear from Prince Turki al-Faisal, former chief of Saudi Intelligence and a previous ambassador to the United States. His remarks were not hidden away in private apartments or even in a conference center, but rather in two major synagogues, at Manhattan’s Temple Emanu-El and Los Angeles’s Sinai Temple.While some may have attended the Israel Policy Forum’s Middle East Security Forum conferences hoping to hear HRH Prince Turki confess his deep love for Israel, what attendees instead experienced was a bold and courageous act in and of itself, with nuanced analysis and commentary derived from his broad experiences in the region. Perhaps more important, the majority of attendees also were partaking in an intimate and civil confrontation of their pro-Israel narrative with that of an experienced Saudi diplomat.Prince Turki’s remarks certainly did not run parallel to everything I believe, and at times elements were offensive to myself and fellow audience members. But his perspective isn’t supposed to fit nicely with mine, and the more our community demands it to, and the more we propagate the “us versus them” and “all or nothing” approach in the mainstream dialogue toward peace, the further away our diverse societies and leaderships will remain.Thus, the American Jewish community and our elected officials in Washington should move forward with an understanding that opposing narratives can and will exist simultaneously in an atmosphere of stability and under the political auspices of a future agreement. An end-to-all-claims, permanent-status agreement (and its preconditions) should not purport to solve the many facets of the conflict, but what we should expect it to do is provide the political foundation to further enable these larger social transformations to get the peoples there.Adam Basciano (@adambasciano) is the strategic initiatives coordinator and director of IPF Atid at the Israel Policy Forum, based in New York City.