Route 90, somewhere in the Jordan Valley

Don’t let the valley die, too. Help it flourish. 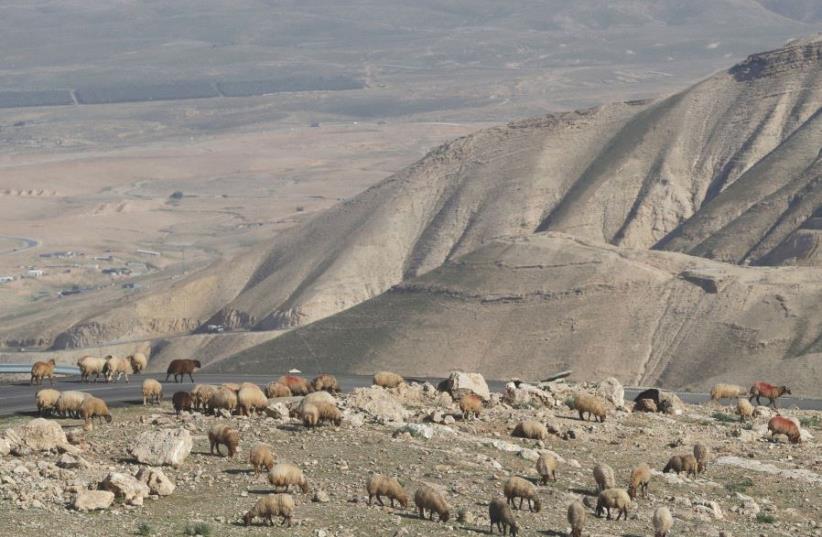 A view of the Jordan valley
(photo credit: REUTERS)
Advertisement
Like the gun that killed the last ninja, GPS killed the last navigator. Today anyone can get anywhere with no need for a map or even a sense of direction.The device recommended I go from Tiberias to Jerusalem through the center of the country. I chose a different route.I’d gone to Tiberias to pay my respects to the Zagori family, who had lost their matriarch, Shaba.She was 92, and hadn’t been in good health. But when your mom dies, it doesn’t matter if she was ill and 100 years old, it still hurts. A mother is a mother. She brought up seven children all on her own, and lived to enjoy her grandchildren and great-grandchildren, and even one great-great-grandchild. In Morocco, they married the girls off when they were 13, her children said, proudly showing me a picture of five generations of stunning women. They’d get married, and then go outside and play marbles and hopscotch.Route 90 stretches from Metulla to Eilat, passing through landscapes very different from those of my home in the northwest Negev.Where I live the scenery is familiar, familial, one might even say intimate: a nearby range of hills, a local wadi.The landscapes of the Jordan Valley I was driving through are something else entirely. The majesty of antiquity, strategic strongholds.The mountains of Gilad and Moab in front of you along a line that appears distinctly on every globe, no matter how small – the Jordan Rift Valley. Mount Nebo rises above.Here in Gilgal, Joshua and the Israelites crossed the Jordan River and began their conquest of the Land of Israel.I gazed at the sights as I drove. To the east of the Jordan, the land is worked right up to the river bank.On our side, a fence blocks the way. Overhead is the path taken by migrating birds since time began, beneath it the marlstone cliffs with the Jordan Valley Nature Preserve at their feet, and at the very bottom, the star of the valley, the river itself – the murky channel whose name resounds throughout the world.Our eastern security belt is sparsely populated. The sights rush past: Ramat Sirin with its wind turbines; the Tabor Stream; the ancient fortress and Ahuzat Shoshana, belonging to the Har-Zion family, whose sons are as hard as the fortress stones; a herd of cattle from Hamadiya; Beit She’an; the village of Jiftlik outside Shechem/Nablus; the Land of Pursuit, its name a reference to the operations to chase down terrorists infiltrating from Jordan after the Six Day War; the Arieh and Gadi army camps, named after Arieh Regev and Gadi Manela, two brave paratroopers who fell in battle near Petzael; Yafit; Tomer and Netiv Hagdud; and then Gilgal.We can never withdraw from the Jordan Valley. Someone has to live there, and it’s not easy. It is remote, isolated, and as hot as hell in summer.The country has to support the worthy pioneers who have chosen to make their home there. In the words of a song, “Somewhere in the valley is a village securing the border.” We must help it survive.The cost in terms of the national budget is negligible, and there is no substitute for the Jordan Valley.I pass Jericho, the winter home of King Herod, the fanatic builder, then the Monastery of St. Gerasimus and Qasr el-Yahud, where Christian pilgrims immerse themselves in the river at the traditional site of Jesus’s baptism. “I remember Beit Ha’arava,” sang the late Arik Einstein of the village abandoned for over 30 years, his moving voice accompanied by a flute. The dying Jordan River flows into the shrinking Dead Sea. Don’t let the valley die, too. Help it flourish.Translated by Sara Kitai.