A New York City native, Roosevelt was very familiar with its Jewish neighborhoods and people. He cared deeply for this community, and carried that into his role as New York City Police commissioner. 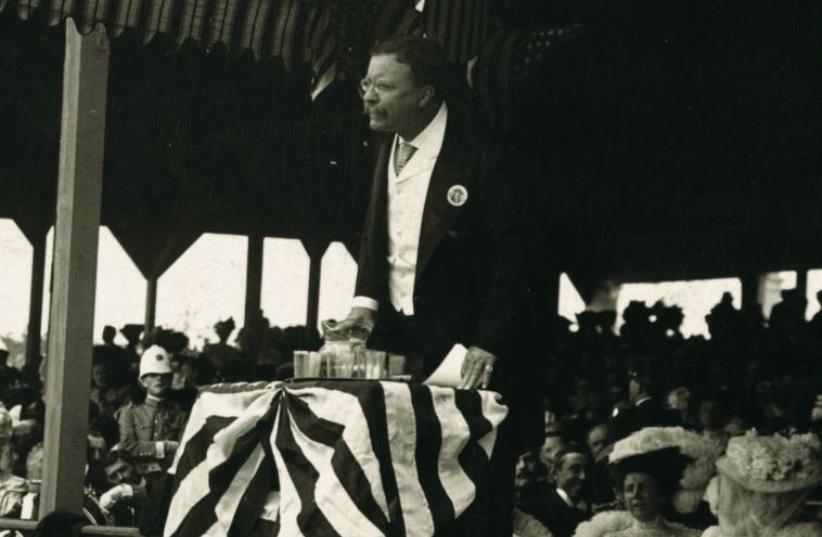 President Theodore Roosevelt is known for a life of remarkable accomplishments, achieved at a speed that would give most whiplash. He went from New York City Police commissioner to assistant secretary of the US Navy, led some of the famous Rough Riders that helped win the Spanish–American War, earned the status of Colonel in the US Army, was elected governor of New York, vice president of the United States, president of the United States, and was the first American to win the Nobel Peace Prize – all before the age of 50.

However, what is often left off his incredible resume is having been one of America’s earliest Zionist presidents.

“It seems to me that it is entirely proper to start a Zionist state around Jerusalem,” Roosevelt said in 1918, a decade after leaving the presidency and a year following the Balfour Declaration. This statement should come as no surprise to those who have followed Teddy throughout his career.

A New York City native, Roosevelt was very familiar with its Jewish neighborhoods and people. He cared deeply for this community, and carried that into his role as New York City Police commissioner.

“Experience after experience of the excellent service done – an excellent work of what I might call Maccabee-type in the police department under me by police officers of Jewish extraction,” Roosevelt wrote in his autobiography.

He once famously forced an antisemitic preacher requesting security for a rally to accept a Jewish security detail to show how ridiculous his actions were.

As colonel of the renowned Rough Riders, Roosevelt led a volunteer US Army Cavalry that included a sizeable Jewish population. The first Rough Rider to die in battle was Jacob Wilbusky, a 16-year-old Jewish Texan. Teddy’s fame on San Juan Hill carried him to the governorship of New York, in part by earning significant Jewish support. Jews associated Roosevelt’s defeat of Spain with Jewish troops as revenge for the Spanish Inquisition of 1492, generating a Jewish rallying call to his candidacy.

After serving one term as governor, Roosevelt was elected vice president alongside William McKinley.

McKinley would be assassinated within the first year of his second term, making Roosevelt the youngest president in US history. As president, Roosevelt appointed the first-ever Jewish cabinet member, Oscar Solomon Straus, as secretary of commerce and labor.

Roosevelt was not shy about his support of Jews around the world. Following the slaughter of 49 Jews in the Kishinev Pogroms in 1903, Roosevelt directly called out the czar. When there was a backlash to Jewish immigrants fleeing to the United States, Roosevelt came to their aid, making it known: “I should no more have a man entered on a passport as a Hebrew than as an Episcopalian, or a Baptist, or a Roman Catholic.”

Roosevelt was awarded the Nobel Peace Prize in 1906 for negotiating the end of the Russo-Japanese War, and would go on to donate a sum of the prize money to the National Jewish Welfare Board.

With October 27 marking Teddy Roosevelt’s 163rd birthday, it feels essential to remember such an underscored aspect of his life. Indeed, Teddy held great admiration for the Jews, keeping two menorahs on display in his home in Oyster Bay, Long Island.

So while we regularly think of Roosevelt as a conservationist, Rough Rider, or as an overall force of nature, let us take a moment to reflect on Teddy Roosevelt the Zionist and outspoken supporter of the Jewish people.