Netanyahu must act to remove this latest source of unnecessary friction. 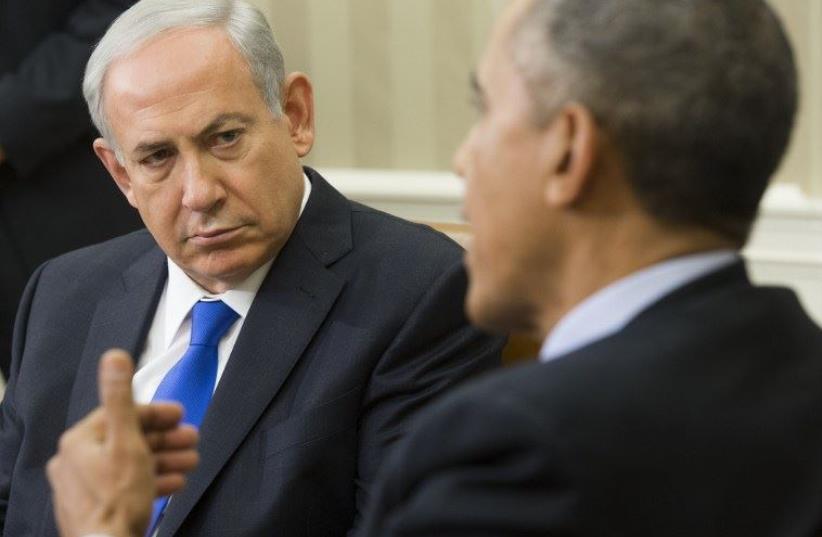 US President Barack Obama and Prime Minister Benjamin Netanyahu hold a meeting in the Oval Office of the White House
(photo credit: AFP PHOTO)
Advertisement
Had US President Barack Obama appointed a new media adviser who had accused Prime Minister Benjamin Netanyahu of being anti-Christian, or Israel’s foreign minister of having the mental age of a preteen, is there any doubt that the spokesman’s appointment would have been withdrawn? Would an American president put off dealing with such a subordinate official until he returned from a meeting with the insulted Israeli, as though nothing untoward had happened? On the contrary, he would not hesitate to apologize, drop the offender and move on.Moreover, is there any doubt that the staff members responsible for vetting the appointee – and who either missed or, worse, ignored his egregious public statements regarding Israel’s leaders – would be summarily dismissed? Would-be public diplomat Ran Baratz got off on the wrong foot by shooting himself in it, but he is not to blame for just being himself. After all, his behavior was available for all to see on Facebook. All who cared to look, that is.Clearly, someone in the Prime Minister’s Office had not done his homework on checking Baratz’s very public – and very undiplomatic - views.And on the very day that the news of Baratz’s appointment and his embarrassing past statements forced Netanyahu’s handlers to go into crisis mode, they weren’t able to do what they should have been doing – which was to come down hard on the Palestinian Authority’s representative at the United Nations, Riyad Mansour, for reviving before the world body the classic anti-Semitic blood libel of the Middle Ages.Israel, he declared, is stealing organs from the bodies of Palestinian “martyrs.” You don’t need a public diplomacy czar to defend the Jewish people, just an information system that does its homework and acts quickly to refute such libels.Instead, an embarrassed Israeli public and a gleeful world media were forced to witness a public relations wound that should have been cauterized but instead festered. Instead of making a clean break by disassociating himself from his nominee, Netanyahu merely suspended him pending an inquiry after his return from Washington.That the unresolved incident could have unnecessarily impinged on an extremely sensitive visit that was aimed, among other purposes, to mend an already shaky relationship between the two leaders didn’t seem to convince the prime minister and his inner circle that removing the Baratz appointment from the agenda was in everyone’s best interest. Luckily, at least according to what we’ve been privy to from the briefings and public offerings after the Obama-Netanyahu meeting, there weren’t any repercussions from the appointment.Who knows what goes on behind closed doors? Even having the issue open at such a crucial meeting is further evidence of Netanyahu’s questionable lapses in judgment.Shortly before the Baratz episode, Netanyahu incorrectly portrayed the notorious former grand mufti of Jerusalem, Haj Amin al-Husseini, as the originator of Hitler’s “Final Solution to the Jewish Question.” Was he trying to match the unbridled rhetoric of PA President Mahmoud Abbas toward Israel, by tainting Palestinians with the Holocaust? Those closest to Netanyahu should possess the insight and foresight to counsel him before he adopts novel strategies that are bound to backfire, take the focus away from the vital issues at hand and simply make him look bad in the world’s eyes.Likewise, did Netanyahu seek his advisers’ counsel or decide on his own to challenge the president of the United States by addressing Congress to argue against the Iran nuclear deal? There was overwhelming opinion beforehand against the possible efficacy of such a move, and this was borne out by the resulting vote in Washington and now the need to mend the relationship with our most important ally.To be fair, the US has its own Baratz somewhere in the senior ranks. Obama missed his own opportunity to apologize to Netanyahu for the anonymous White House official who was so widely quoted referring to Israel’s prime minister as “chickenshit.” Instead, Secretary of State John Kerry phoned his regrets.Now that the Obama-Netanyahu meeting has passed, with both sides putting a positive spin on the post-conflict phase of the their relationship and on the unbreakable US-Israel ties, Netanyahu must act to remove this latest source of unnecessary friction.