The danger of diluting the Holocaust

To all those who so whimsically cite the Holocaust, be it in connection with COVID vaccinations, climate change, or soccer, I say to you: Stop.

Next week marks the annual commemoration of Kristallnacht, the Night of Broken Glass, when the world remembers the heinous Nazi pogrom throughout Germany and Austria that took place on November 9-10, 1938.

Unleashing their appalling hatred, the Germans destroyed 267 synagogues, attacked 7,000 Jewish-owned businesses, and arrested tens of thousands of Jewish men who were sent to concentration camps, all in the course of a few hours.

Recalling this horrific event, which served as a prelude to the Holocaust, should evoke solemnity and reflection and remind us all of the unique horror perpetrated by Germany and its collaborators against the Jewish people.

But instead of bowing their heads in respect at this time of year, it seems that many prefer to dilute the memory of the Holocaust rather than dignify it.

Indeed, in just the past few days, a wide range of people across the globe have deployed comparisons to the Holocaust with wild abandon bordering on sheer inanity.

This is an insult not only to history itself but especially to the 6 million Jews who were murdered. And it cannot be allowed to stand.

Take, for example, no less a figure than the Archbishop of Canterbury, Justin Welby, whose father’s family was Jewish.

In a BBC interview at the UN Climate Change conference in Glasgow, he intimated that global warming is potentially worse than the Nazi genocide, saying that leaders who fail to address environmental issues will be viewed by future generations “in far stronger terms than we speak today of the politicians of the 1930s, of the politicians who ignored what was happening in Nazi Germany.”

Furthermore, he asserted, climate change will “allow a genocide on an infinitely greater scale.”

After his comments provoked a storm of outrage, Welby tweeted an apology, correctly noting that “It’s never right to make comparisons with the atrocities brought by the Nazis, and I’m sorry for the offense caused to Jews by these words.” 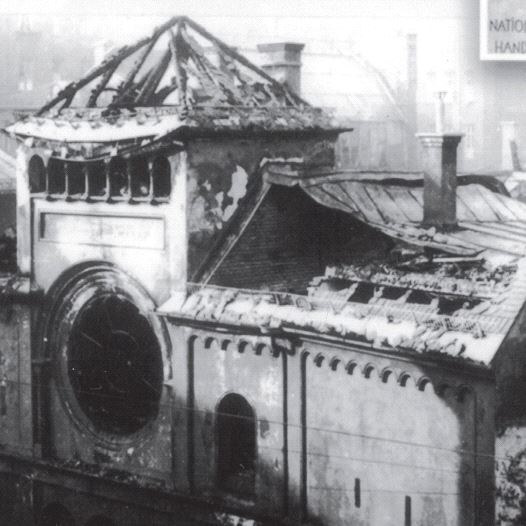 THE DESTRUCTION of this Munich synagogue during the Kristallnacht pogroms of 1938 haunts its Jewish community till this day. (credit: Wikimedia Commons)

But this begs the question: why did he feel the need in the first place to bring up the Holocaust, which has nothing whatsoever to do with carbon emissions in modern-day society?

On the other side of the pond, in the US state of Kansas, a similar level of insensitivity was on display when the memory of the Holocaust was exploited by opponents of a federal vaccine mandate in the most shameless of terms.

Speaking to the Health Committee of the Kansas state legislature, labor leader Cornell Beard equated the treatment of people who refuse to get vaccinated with that meted out to European Jewry in the previous century.

“We’re basically saying you’re the modern-day Jew,” Beard told the legislators, adding, “You’re gonna wear that star… and we don’t give a damn if you complain about it or not.”

Astonishingly, none of the legislators present objected or protested the comparison, and one of them, state Representative Vic Miller (D) of Topeka, said later that he didn’t “get the reference.”

SADLY, IT seems that Holocaust imagery has become a popular tool in the hands of those opposed to COVID-19 vaccinations across the globe.

This past Saturday, in Melbourne, Australia, a protester against mandated inoculations donned a replica concentration camp uniform and held up a sign saying, “history repeats.” When confronted by some Jewish passersby, he refused to back down.

That same day, in the northwestern Italian town of Novara, demonstrators also put on Nazi-style concentration camp uniforms and some even carried numbers, a not-so-subtle reference to the way Jews were tattooed by the Germans in the death camps.

And in Holland, a Reform rabbi named Tamarah Benimah, caused a stir when she said in a speech that while those behind coronavirus restrictions have good intentions, “as a Jew, what happened in Nazi Germany is a warning to me. Those in power all had the best of intentions. Also when they declared Jews a danger to ‘public health.’ Also when they declared a war against the ‘virus’ of those times.”

Make no mistake. These kinds of statements merely cheapen and demean the Holocaust, reducing it to a mere analogy.

And inevitably, the obscene and the absurd eventually meet, such as when the manager of the Bristol Rovers, an English soccer team, recently bemoaned the poor performance of his players in the loss of a game to “a Holocaust, a nightmare, an absolute disaster.”

It should not need to be said but apparently, it must: the Holocaust is not a political talking point. Nor should it be.

The Holocaust was the systematic attempt by the Germans and their comrades to murder the Jewish people and erase them from the face of the earth. It was the ultimate act of evil, the worst atrocity committed in the annals of mankind.

And neither politicians nor activists have a right to invoke its sacred memory for the sake of furthering their political interests.

So to all those who so whimsically cite the Holocaust, be it in connection with COVID vaccinations, climate change, or soccer, I say to you: Stop. Just stop.

You might mean well, but you are merely diluting the Holocaust and its lessons, which is almost as bad as denying it.

The writer is the founder and chairman of Shavei Israel (www.shavei.org), which assists lost tribes and other hidden Jewish communities to return to the Jewish people.