The ‘farhud’ – the riots against the Jews of Iraq

Not only the Palestinian Arabs suffered a nakba; the Jews of the Arab world had their own catastrophe. 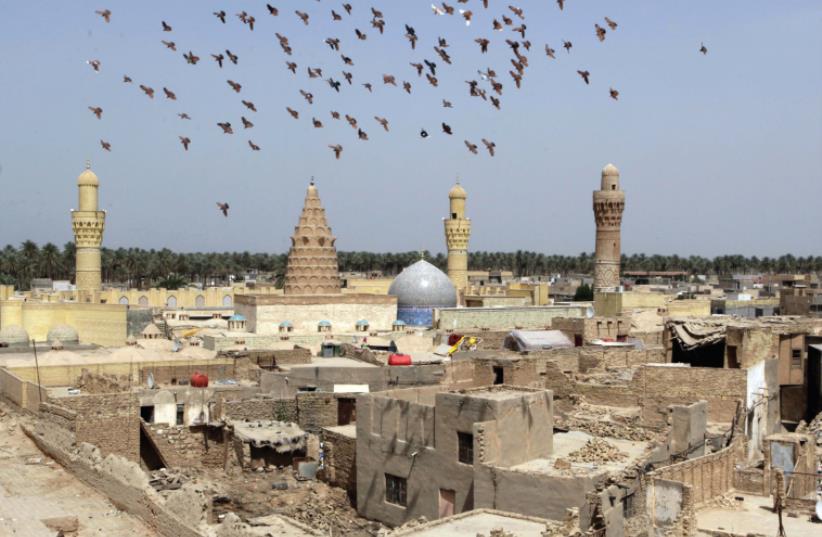 A JEWISH shrine containing the tomb of the prophet Ezekiel in the Iraqi town of Kifl, south of Baghdad. The author describes his last Passover in Iraq.
(photo credit: REUTERS)
Advertisement
During Shavuot Iraqi Jews will commemorate the 75th anniversary of the farhud – the cruel and bloody riots that took place on Shavuot (June 1-2, 1941) against the small Jewish community of Iraq.In the riots, reminiscent of Kristallnacht in Germany, 179 Jews were murdered, hundreds more wounded and much Jewish property looted. The memory of the riots remains fresh in the minds of the Iraqi Jews in Israel and abroad.Similar attacks occurred against almost all Jews who lived in Arab countries. The Jews did not declare war on their hosts. They never fought against them, as the Arabs in Mandatory Palestine fought against the Jewish settlements and afterwards against the nascent Jewish State of Israel.The world has heard a great deal about the injustice that happened to the Palestinian Arabs, under the code name “Nakba,” or “catastrophe,” but knows almost nothing about the wrongs committed against Jews in Arab countries. What happened in Iraq and the rest of the Arab countries was in effect an ethnic cleansing of the Jews. Jews were forced to leave behind their personal and communal properties ,including schools, hospitals, ancient synagogues, cemeteries and prophets’ graves (some of which are being demolished now by Islamic State). The Arab governments confiscated all Jewish property.While the Nakba is marked every year with demonstrations and wide media coverage, the Jewish disaster does not merit any public or media notice. This despite the fact that its human and physical dimensions were larger than the Nakba (the number of Jewish refugees forced out of their homes was about 856,000, while the Arabs who left Mandatory Palestine numbered about 650,000 according to UNRWA statistics). Only on February 22, 2010, was the issue placed on the Israeli agenda with the enactment of the The Law of Preservation of the Rights to Compensation of Jewish Refugees from Arab Countries and Iran, which states that any negotiations for the achievement of peace in the Middle East must include the subject of compensation for said Jews.And only four years later, on November 2014, a memorial ceremony took place at the president’s residence to honor the legacy of the Jews from Arab countries, according to law adopted by the Knesset that year.The attacks against the Jews in Arab lands occurred even before the establishment of the State of Israel. In Iraq they began with discrimination in the fields of economy, education and public life. Afterwards, Arab nationalism ignited the fires of rioting against the Jews, which came to a peak in the farhud of 1941. Similar tragedies befell the Jews of Libya, Aden and other Arab countries. In Egypt, a mass expulsion took place in the dead of night.In Iraq, the combination of xenophobic Sunni nationalism and anti-Semitism produced a powerful hatred of the Jews. This hatred, according to American historian Edwin Black, Hebrew University Prof. S. Moreh and Dr.Z. Yehuda of the Jewish Babylonian Heritage Centre, was abetted by Nazis such as German envoy to Baghdad Dr. Fritz Grobba and pseudo-religious leaders such as Haj Amin al-Husseini, who fled from Mandatory Palestine and found in Iraq a convenient venue for his anti-Jewish activities. The Jews were left with no choice but to flee from Iraq and the rest of Arab countries that they had helped to found and bring into the modern era with their contributions to government, the economy, medicine, education, literature, poetry and music.The threatening anti-Jewish climate that prevailed in every Arab country was accompanied by inflammatory anti-Jewish declarations broadcast via radio, and even from the podium of the United Nations. Government harassment and popular attacks drove the Jews of the Arab world to migrate en masse to Israel.There were certainly Muslims in the Arab countries who did not support the attacks on the Jews, but their voices were not heard. The Jews were the scapegoats in internecine power struggles between the Sunnis and the Shi’ites, just as today Israel is at the center of the struggle between the Shi’ite Iran and the Sunni states.In recent years, a process of awakening can be discerned in the Arab world, especially among intellectuals, who recognize that it was not only the Palestinian Arabs who suffered a nakba; the Jews of the Arab world had their own catastrophe.For sake of history and educating the future generations a proper commemoration of the plight and the heritage of Jews from Arab countries should take place in Israel. Arab leaders – Palestinians and others – would do well to stop parroting the slogan “right of return” and deluding their people, because there is no turning back the wheel of history.The author is a former ambassador and deputy general of the Foreign Ministry.