The FBI’s failure in Orlando

Terrorism knows no boundaries, has no political aspirations, or demands for independence or money. 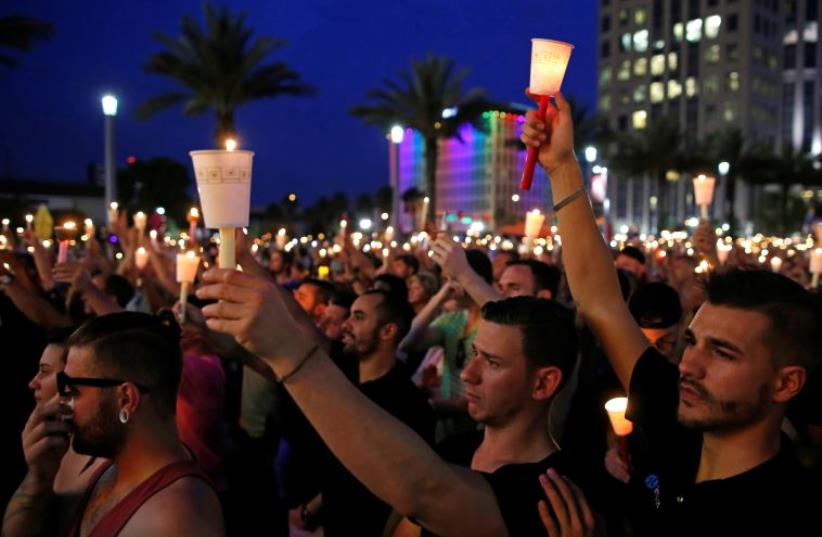 People gather for a candlelight vigil during a memorial service for the victims of the shooting at the Pulse gay nightclub in Orlando, Florida, June 13, 2016
(photo credit: REUTERS)
Advertisement
Last week, 49 Americans were murdered in a mass shooting carried out by one individual – Omar Mateen – at a gay club in Orlando, Florida. That’s an incredibly large number of fatalities, considering the shooter was operating on his own. But this wasn’t the only unique aspect of this incident – there was one more important detail. Mateen had been investigated twice in the past two years by the FBI for suspected terrorist sympathies. He was even arrested, but was subsequently released due to lack of evidence of illegal activity.And then recently, Mateen managed to acquire a gun license, and to legally purchase firearms. Needless to say, the authorities did absolutely nothing about this.In short, Mateen, a suspected terrorist, was known to American intelligence forces, and yet they did nothing to prevent him from carrying out an attack on innocent citizens.FBI agents are very good at their work. They gather intelligence and thwart dangerous attacks that endanger the country’s security. In fact, they were already pretty good at their job even before 9/11. The Americans’ (as well as the Europeans’) biggest problem, though, is that they always follow the guidelines, and these guidelines prevent them from covering a large number of scenarios. In addition, US law prevents FBI agents from taking the steps necessary to prevent a terrorist attack from taking place.It is almost impossible to stop a “lone wolf” terrorist working on his own initiative who spontaneously decides to carry out an attack. The murderous attack at the Sarona Market in Tel Aviv two weeks ago is just one more example of this. Yet there are many differences between how the American and Israeli security services operate.Counter-intelligence operatives follow a number of steps that help them reach the necessary people from whom they can gather the intelligence that will help them thwart potential threats and terrorist activity. The first step is to place undercover agents and any appropriate technological devices in the location that has been identified.These agents and sources of information provide important keys and clues that can alert security agents to suspicious events or people.When security agencies get the chance to interrogate suspects before any attack has taken place, oftentimes they can use the information they extract from these suspects to put a halt to terrorists’ plans and actually prevent the attack from occurring in the first place. This is exactly how the Shin Bet (Israel Security Agency) has been operating in Judea and Samaria for the past few years. Mateen, the terrorist from Orlando, was identified and even interrogated by the FBI.It’s wonderful that the United States decided that Mateen was a potential threat due to his support of Islamic State (ISIS) and other extremist organizations, but the FBI failed to move on to the next step in the investigation.The FBI apparently decided that the Mateen case did not warrant moving on to the second stage, which could have entailed putting him under surveillance or installing listening devices in his residence. Either of these actions would have immediately alerted the authorities to the potential threat evident in Mateen’s movements. This man was suspected by the FBI to be involved in terrorist activity, but then they dismissed him and completely ignored him, allowing him to prepare his attack unhindered.If the FBI had simply engaged in the second step, they would have immediately been alerted when Mateen applied for a gun license and then purchased a weapon. They would have seen the statements he posted online regarding his affiliation with terrorist groups, following which the FBI would have sprung into action.When an intelligence organization receives real-time information regarding the identity of terrorists who are planning to carry out an attack, and the details of their plan, it immediately pursues the individuals involved and uses every means available to thwart the attack. This exact sequence of events occurs on a daily basis here in Israel. The Shin Bet has an extremely high success rate in preempting attacks.Unfortunately, though, this was not the case in Orlando last week.An extremist Muslim who had been under the FBI radar for two years for carrying out activities that endangered the security of American citizens on American soil succeeded in legally procuring a weapon, entering a club and opening fire on hundreds of innocent civilians.Forty-nine American citizens paid for this failure with their lives.US law does not allow the authorities to question someone for applying for and receiving a license to carry a gun. The Americans – including President Barack Obama – do not seem to be able to internalize the fact that they are dealing with Islamic, jihadist terrorism, not just random outbursts of violence. Obama cannot even bring himself to say the words “radical Islamic terrorism.” As a result, the American security forces’ hands are tied, which just inspires more terrorists to carry out attacks against innocent people.Terrorism knows no boundaries, has no political aspirations, or demands for independence or money. Islamic terrorists murder for the sake of murdering. They are animals acting in blind faith to destroy everything and everyone not compatible with the world of an Islamic caliphate. If we ever hope to get the upper hand, we must change our tactics and adapt ourselves to the rule of the jungle.But in order to accomplish this, we need courageous leaders who have a clear vision, and who are willing to fight hard to fulfill their goals. Such a leader, however, does not currently exist in the West.

The writer is a former brigadier-general who served as a division head in the Shin Bet (Israel Security Agency).Translated by Hannah Hochner.
Advertisement
Subscribe for our daily newsletter