The FIFA fiasco: What woeful wimps

Israel’s response to the Palestinian initiative to suspend it from FIFA epitomized everything that is wrong with its public diplomacy. 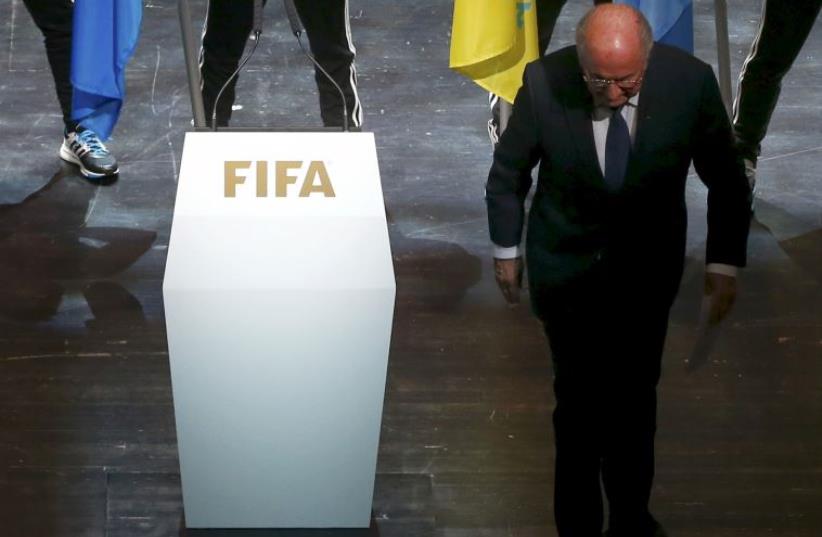 FIFA President Sepp Blatter leaves the stage after making a speech during the opening ceremony of the 65th FIFA Congress in Zurich, Switzerland
(photo credit: REUTERS)
Advertisement
We the Palestinians are the enemies of Israel. There is no going back to negotiations. Listen. We as yet don’t have a nuke, but I swear that if we had a nuke, we would have used it this very morning.
- Jibril Rajoub, head of the Palestine Football Association (PFA) on Lebanese TV station Al-Mayadeen, April 30, 2013

Any activity of normalization in sports with the Zionist enemy is a crime against humanity.
- Jibril Rajoub, Facebook, September 8, 2014

I appeal to Jibril Rajoub – I want us to work together, I want us to cooperate, I want us to hug and embrace each other.
- Ofer Eini, head of the Israel Football Association (IFA), in response to Rajoub’s attempt to suspend Israel from FIFA, The Telegraph, June 2, 2015

Benjamin Netanyahu is right when he says that the Palestinians are not only challenging the occupation, but Israel’s actual existence.
- Nahum Barnea, columnist, on Rajoub’s attempt to suspend Israel from FIFA, June 2, 2015
Israelis have many things to be proud of.The way Israel conducted itself during the recent FIFA brouhaha was definitely NOT one of them.See the latest opinion pieces on our page Illuminating & instructiveIndeed, Israel’s response to the Palestinian initiative, headed by former arch-terrorist Jibril, to have it suspended from FIFA (International Federation of Association Football), in Zurich last Friday, epitomized everything that is wrong with the country’s public diplomacy, and its floundering attempts to confront burgeoning international efforts to isolate it.In this regard, it was an episode that was both illuminating and instructive – in the negative sense of the words.For although “Israeli diplomatic officials expressed relief over the weekend following the Palestinian Football Association decision on Friday to withdraw its proposal to kick Israel out of FIFA” (Jerusalem Post, May 29), their claim that this constituted “not only a victory for Israeli soccer but a significant diplomatic triumph” has a distinctly hollow ring to it.Thus, despite the fact that the Palestinian effort was unsuccessful (this time), I find myself in the bizarre position of having to concur with the assessment made by someone I almost never agree with: Joint List MK Ahmad Tibi. Indeed, it is difficult to dispute his contention that the Israeli celebration of the withdrawal of the Palestinians suspension bid as a “diplomatic victory” is decidedly misplaced. Acerbically, but sadly, not inaptly, Tibi jabbed: “The joy on the Israeli side is that somebody fell from the first floor and broke an arm and a leg – instead of his neck. [Friday’s] yellow card will likely lead to a red card in the future.”Degrading, dysfunctional, defeatist Indeed, Palestinians did not end up empty handed. Though Rajoub withdrew the demand for the suspension of Israel, he submitted an amended resolution, phrased in extremely harsh – even hostile – language toward Israel, which was passed by 90% of the FIFA Congress.This, in itself, comprises a significant gain for the Palestinians. The resolution begins in the following terms: “In order to end the suffering and discrimination of our Palestinian football family at the hands of the illegal and racist occupation of our land, we have presented a proposal for a final solution.”Incredibly, the Israeli representative, Ofer Eini, endorsed the amended resolution, which called for setting up mechanisms for monitoring Palestinian complaints – thereby implicitly lending credence to them! To grasp the gravity of this, consider the implications of the main “Palestinian concerns” stipulated in the amended resolution: (1) The restrictions of Palestinian rights for the freedom of movement. (2) The continued racism and discriminatory behavior of IFA officials and clubs in direct violation of…the principles of FIFA, [including FIFA’s no-tolerance policy against racism and discrimination] (3) the grave concern over at least five Israeli clubs located in illegal settlements in the occupied State of Palestine. (Ha’aretz, May 29).The fact that “Israeli diplomatic officials” could consider the overwhelming endorsement of such a perniciously worded resolution anything remotely approaching a “significant diplomatic triumph” boggles the mind – and starkly underscores the degrading, dysfunctional, and defeatist depths to which Israeli diplomacy has descended.

Martin Sherman (www.martinsherman.net) is the founder and executive director of the Israel Institute for Strategic Studies. (www.strategicisrael.org)