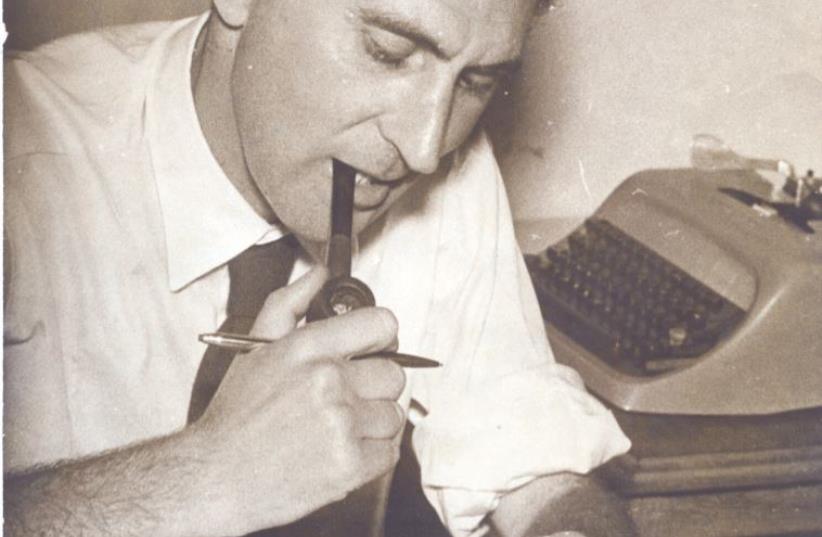 JOE BLUMBERG at his desk at ‘Drum’ magazine, Johannesburg.
(photo credit: COURTESY THE BLUMBERG FAMILY)
Advertisement
Joe Blumberg was a mentor. An outstanding newspaperman, he mentored a whole generation of aspiring journalists at The Jerusalem Post, where he was a senior editor between 1963 and 1990. He would gently calm down a hysterical junior staffer whose copy had been ripped to shreds by a rampaging news editor and say, “Well, perhaps we could do it better this way,” and impart a gem of newspaper wisdom.One of the places where Joe, who died in Ashkelon on March 21 at the age of 95, acquired his experience was Drum, the South African news magazine for blacks, where he worked in the 1950s. On pay day, his black colleagues would line up for interest-free and rarely repaid loans from him. He also worked at the leading liberal South African daily, the Rand Daily Mail, and moonlighted at the Zionist Record. From 1956 to 1957, he and his family moved to London, where he worked for the prestigious Reuters news agency.After the Sharpeville massacre, when 69 peaceful black demonstrators were killed by police in March 1960, Joe had enough of the oppressive apartheid regime and immigrated to Israel with wife, Flora, and children Susan and Philip-Danny in the summer of 1962. A third child, Dena, was born in Israel.After a spell at Kibbutz Tel Yosef in the Jezreel Valley, Joe went to look for work. The only option for an English-language newspaperman in those days was The Jerusalem Post.Ari Rath, then the Post’s managing editor and subsequent editor-in-chief (1975-1989), takes up the story.“When he first introduced himself to me at the Post, with his rich experience at the Rand Daily Mail fighting apartheid and later with Reuters at Fleet Street in London, I realized right away that he would be an asset for us, although his Hebrew was somewhat lacking.An avid pipe smoker, Joe would come to work with his legendary pipe bag, since he would have to keep the pipes dry and change them regularly during an eight-hour shift.”Rath’s co-editor in those years, Erwin Frenkel, has this to say about Joe: “To the small circle of reporters and editors that made up The Jerusalem Post before 1967, Joe brought a quietly persuasive professionalism honed by his formative journalistic experience in South Africa and England.“His editorial pen was deft in repairing ambiguous or turgid texts. But his presence was soon felt even more keenly by the sense of style that he introduced to the pressure tasks of news-page layouts and writing headlines in the now almost forgotten days of print journalism.“He represented in that way a vital link between the small island of English-language journalism in a remote Jerusalem, and the standard-setting centers of English journalism abroad. That served the paper well as it grew and expanded after the Six Day War in 1967 and the Yom Kippur War of 1973.“With that growth, Joe was appointed editor of the Post’s overseas weekly edition, which was nourished by his good judgment and editing skills.“Joe’s professionalism was matched by a self-effacing good humor, not common to newsrooms, which always blunted the pain for the victims of his editing surgery. It also made him a warmly valued colleague and, for many years, a pillar of the old Post.”The old Post was different from the somewhat depleted and sterile atmosphere of today’s terminally afflicted print journalism. The night news desk was replete with hard-bitten, hard-drinking, chain-smoking copy editors hailing from the far corners of the globe, banging away on ancient typewriters with news teleprinters chattering away in the background. Here, Joe was in his element.A fellow senior editor in the “old days” was Malka Rabinowitz, who remembers Joe as “a wonderful human being and colleague. He always had time for you, whether it was professional or personal.”One of his protégés, whom he guided through the junior reporter’s first faltering steps, was Hirsh Goodman, later to become creator and editor of The Jerusalem Report.Goodman writes: “He was a mentor who saw in me what I did not see in myself; treated me as an equal, despite the quarter century between us.”JOE WAS BORN in Johannesburg in 1920. His parents, Avraham and Eva, were from Latvia. He belonged to the Zionist Socialist movement, and when World War II broke out, he joined the South African Army. He was assigned to the Transvaal Scottish Regiment and fought in the bitter North African campaign. His service with the Transvaal Scottish earned him the nickname “Jock,” by which he was known to family and friends. While on leave from the fighting, he visited close relatives living in Palestine, traveling by train from Cairo to Tel Aviv.After the war he studied literature and began working as a journalist. He was also a keen amateur jazz pianist, and throughout his life enjoyed playing and listening to jazz, talking knowledgeably about it and introducing the uninitiated to its delights. He did the same with good books, about which, rather unusually for a journalist, he was quietly erudite and up to date.He had an amazing way with people and had many friends of all ages.Several years after the death of Flora in 1985, he retired from the Post and moved to Ashkelon, where he lived till his death.Joe never owned a car in Israel, and his friends ascribe his longevity to the fact that he’d go everywhere on foot, often walking miles to and from work, always carrying his shoulder bag full of his pipes and books. His friends ascribe his longevity to this practice despite, or perhaps because of, the fact that at his destination, he would immediately light up a cigarillo and enjoy a glass or three of whisky.The writer is managing editor of The Jerusalem Report.