The limits of diplomacy: Why ‘better Iran deal’ may not be possible

Anyone who understands how sanctions are put in place and maintained knows the inherent limitations of the so called “snap back” mechanism. 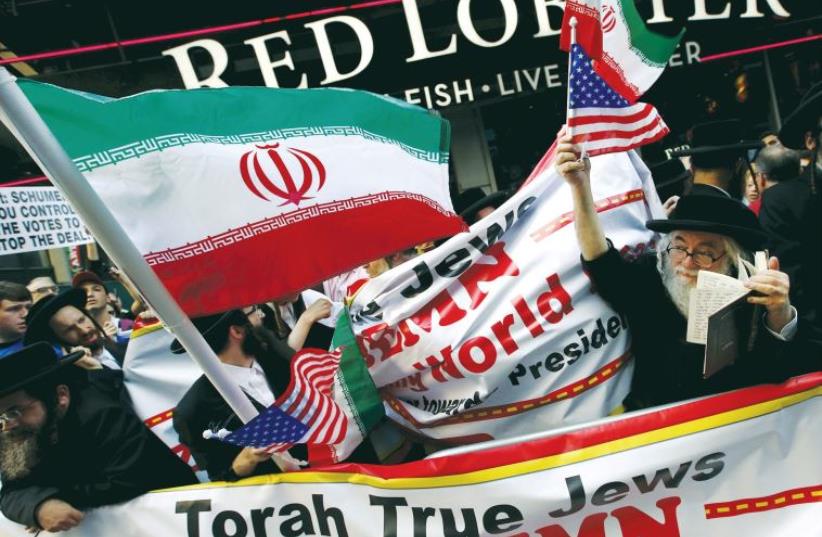 A group of Orthodox Jewish protesters who support the Iran deal gathered in New York to protest against another group of anti-Iran deal protesters
(photo credit: REUTERS)
Advertisement
Although the nuclear agreement between the P5+1 powers and Iran is by no means a “good deal” as the White House insists, at this point in the game, a “better deal” is no longer possible. And the reasoning behind this might be more worrying than the actual limitations of this agreement.The limitations with the Iran deal As even the White House admits, this deal has many holes. A better deal would have extended nuclear limitations indefinitely, or at least until Iran underwent significant moves toward moderation and democratization; and it would have only lifted the non-nuclear related arms embargo or ballistic missile ban when Iran ended its subversive and radical activities in the region.Furthermore, anyone who understands how sanctions are put in place and maintained knows the inherent limitations of the so called “snap back” mechanism, and how difficult implementation and verification over the next 10, 15 or 25 years will be (depending on which part of the agreement).Moreover, intelligence is rarely “a smoking gun” of clear evidence, rather mostly clues, indications and estimations. And when presenting policy-shifting “indications” to the political level, they will more often than not be discarded. Will the White House risk tanking the whole deal based on “indications”? Iran will likely cheat and lie – maybe “around the edges” and to “test the boundaries,” but probably not obscenely or obviously – they’re too smart for that.The White House is certainly correct in its understanding that a military strike, by most estimates, would have only delayed an Iranian nuclear program by two or three years, maybe longer with continued strikes and heightened sanctions.But knowledge can’t be bombed, and eventually Iran would have rebuilt, further underground, and this time with a more pressing reason to do so. So, if this deal staves off an Iranian bomb for at least a decade, if not more, then its success does indeed extend beyond a military strike.Nonetheless, let it be clear that despite White House rhetoric to the contrary, this deal does not “solve” the Iranian nuclear challenge, it only delays it. The deal essentially trades sanctions relief and international legitimacy for Iran’s nuclear program for a 15-year freeze on that program – elegantly kicking the can down the road to whoever will occupy the Oval Office in 2030.

Looking ahead – containment and resolveAs it stands, the deal’s opponents should continue making their case until the vote is cast in Congress; that is how diplomatic treaties of this magnitude in a democracy should be managed, and it sends a clear message to Tehran that at least half of Washington maintains the necessary resolve regarding Iran. But as this deal will likely pass Congress, once it does, opponents and proponents alike should focus their efforts on implementing the agreement aggressively and demanding Iran be held fully accountable for any transgressions.If done so, it will at least deny Iran a nuclear program for the duration of the deal.More importantly, as the deal is not meant to tackle non-nuclear issues, such as Iran’s regional trouble- making, the US would be wise to stand by its Middle Eastern allies concerned they’ve been thrown under the bus, and aggressively seek to contain and counter Iran’s nefarious behavior. As President Obama says in the same interview with Tom Friedman, “they’re still going to be sponsoring terrorism, and they’re going to get sanctions relief. And so they’re going to have more money to engage in these bad activities...and we are going to have to systematically guard against that and work with our allies... to stop the work they are doing outside of the nuclear program.”Many of the deal’s critics, especially in Israel, are (rightly) concerned that in the name of upholding the agreement, the US will allow an increasingly emboldened Iran freer rein to advance its hegemonic aspirations.The US, throughout this entire period and beyond, must lead and support its allies in the region to stand firm against Iran’s regional aggression and expansion, all the while pushing for greater moderation and reform in the Islamic Republic. If Iran does not feel obligated to unclench its fist on non-nuclear matters, the US’s outstretched hand will have to re-clench itself.In the meantime, it should be absolutely clear that this deal does not “solve” the problem, but only pushes it down the road. And if Iran has not changed its ways by then, the US and the West will once again be faced with a test of resolve, and on a much bigger scale.The author is a Fellow at the Jewish People Policy Institute. He is a major (reserves) in the Israel Defense Forces, where he served as a foreign policy and national security planner and advisor, and was an analyst in Israeli Defense Intelligence. For more on the Iran Deal:
Congress’s Iran dilemma: Weighing the president’s conflicting messages
My daughter and Iran
Missile defense central to Iran deal
Iran’s old-new role in the region
The price President Obama will demand from Israel for increased military aid after the JCPOA