Gideon Sa’ar and his ex-wife Shelly, accompanied their daughter Daniella on her wedding day with her chosen one, Yoni, an immigrant from Paris who served as a lone soldier. 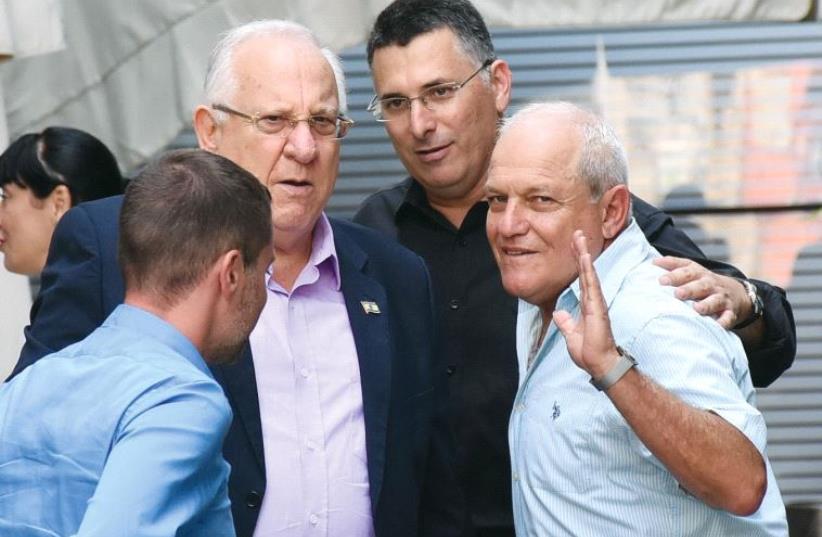 REUVEN RIVLIN (left), Gideon Sa’ar and Chaim Katz.
(photo credit: AVIV HOFI)
Advertisement
1. Super merger
A month after the completion of the acquisition of the supermarket chain Mega, the owners of Yenot Bitan opened a new branch in Acre – the first branch of the merged supermarket chain, and also the city’s first Yenot Bitan. The chain comprises of 71 branches throughout the country. The city’s residents enjoyed special offers and discounts following the opening. CEO Nahum Bitan, together with his wife Nurit and the deputy CEO Yossi Bitan, accompanied the customers in the supermarket, and even entered the market stall, where they sold fruits and vegetables.2. Birth of an app
Dana Azrieli, chair of the Azrieli Group, returned from a family visit in Canada, put on her best garments and gave a big smile while launching her new “baby” – the Azrieli malls’ new app. Azrieli Group’s CEO Yuval Bronstein and Azrieli Malls CEO Arnon Toren were also present at the launching and gave explanations about the app and its variety of uses.3. Mazal tov!
On Friday, former minister Gideon Sa’ar and his ex-wife Shelly, accompanied their daughter Daniella on her wedding day with her chosen one, Yoni, an immigrant from Paris who served as a lone soldier. Danilla will begin a career as a teacher in a few days. The small wedding took place at the vegan Georgian restaurant Nanuchka in Tel Aviv. The guest of honor at the event was President Reuven Rivlin, who happens to be a vegetarian. The owner of the restaurant, Nana Shrier, made sure that the guests tasted many vegan dishes. Among the attendees were also politicians and Likud activists, including Welfare Minister Chaim Katz and Gil Sheffer, the former chief of Prime Minister Benjamin Netanyahu’s bureau.4. Back to school
Chairman of Israel Securities Authority Shmulik Hauser cleared some time in his schedule in order to host, in what has become a tradition, the children of employees who are starting first grade.Hauser and the secretary-general of the Authority, Oded Spirer, congratulated the children and wished them a productive and successful school year. The future pupils enjoyed breakfast, a tour in the Authority’s offices, a movie and received a gift from the employees committee.

5. Yiddishspiel
A festive gala with the special summer show “migun mishelanu” (a tune of our own) of the Yiddishspiel theater was held in Tel Aviv. The performers – singer David D’Or, Sassi Keshet, who also serves at the art director and head of the theater and Nancy Brandes, who conducts the orchestra on stage, received compliments from the audience. In attendance were Zelig Rabinovich, deputy head of the theater, Yafit Greenberg, Benny Arad, former education minister Shai Piron and Gabi Last, chairman of Delek Group and chairman of the board of directors.Translated by Sharon Aharoni.