Attrition is a double-edged sword; Al-Qaida power was finally eroded to such a degree as to make the organization ineffective. 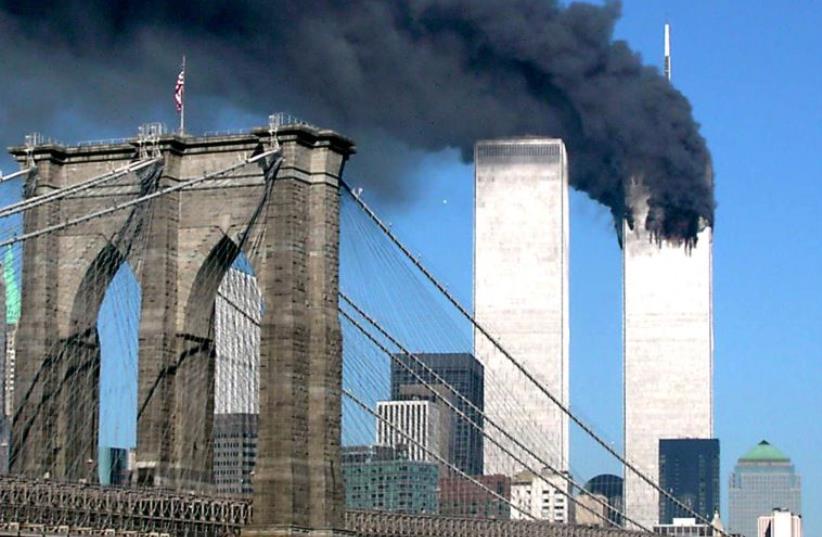 The World Trade Center burns after being hit by a plane in New York on September 11, 2001
(photo credit: REUTERS)
Advertisement
I was still a soldier in the IDF when the planes hijacked by al-Qaida terrorists crashed into the twin towers of the World Trade Center.Almost 15 years later, I vividly remember the shock, the profound rage and the sensation of a dramatic historical change, possibly even a world war.When president George W. Bush declared that the terrorists “hate us because they hate our freedoms,” he drove the point home more accurately than many learned observers. Such experts, as well as many pundits from the Left, imagined that the US is hated because of its numerous interventions in the Middle East, its support of Israel or the economic exploitation of the Third World. But anyone who pays due attention to global jihadi publications realizes that economic and national grievances are ultimately secondary. Long before Osama bin Laden, global jihadi leaders and ideologues perceived the Western way of life as an abomination that has to be wiped out. For them, the war has always been a zero-sum game of faithful believers against wicked heathens.No US step, short of total surrender, can change that basic position.And yet, Bush’s speech was misleading, as it convinced many to see al-Qaida as a gang of irrational barbarians who could be easily hunted and defeated in a major show of force. Unfortunately, nothing was further from the truth. Notwithstanding its far-reaching goals, al-Qaida was always a rational organization. Terrorism is not an irrational outburst of hatred. Instead, it is a strategy, a continuation of policy by other means.As the historian Yuval Harari once explained, a strategy of terrorism is a highly risky tool used by a weak power against a vastly stronger rival. Unlike soldiers, terrorists do not try to defeat or exhaust their rivals by breaking their conventional military force. Instead, they try to disturb the mental balance of their rivals, to shock and to intimidate them by attacking “soft” targets of high emotional value. A shocked rival tends to overreact with massive force.Then, all sort of things may happen.Third parties may be harmed by the victim’s reaction, allies may desert, and if all goes well, the victim may give in to the terrorist because the struggle is not worth the price.But even when their gamble works, terrorists rarely score an immediate victory. They merely improve their position in an ongoing war of attrition. If their goals are limited and realistic, a terrorist gamble may work. In its Beirut barracks bombings in 1983, Hezbollah “convinced” the US that remaining in Lebanon was not worth the price. Israel had to endure a longer war of attrition in order to reach the same conclusion in 2001.Al-Qaida’s 9/11 gamble was not that different from the outline described above. The global terrorist organization attempted to provoke a US overreaction.This overreaction, it hoped, would tempt the Americans to penetrate further into the Middle East, out of their desert bases and comfort zone.Initially, the gamble paid off beyond bin Laden’s wildest dreams. The decision to invade Afghanistan harmed al-Qaida greatly but also brought the US into an endless conflict in unfamiliar grounds.Iraq was much worse, as the invasion greatly compromised US relations with many of its allies in Europe, the Middle East and the wider Muslim world. Taken together, both campaigns sapped American wealth, exhausted resources and increasingly compromised the US willpower.President Barack Obama’s decision to leave Iraq in 2011 was a leap from the frying pan into the fire, as it bred chaos and ultimately created the problem of Islamic State.But bin Laden also miscalculated, with disastrous consequences for his organization.His mistake was strategic. Contrary to Hezbollah in 1983, al-Qaida set a goal that was far too ambitious: to evict the US and the other Western powers from the entire Middle East, including abandoning Israel. With its limited power, al-Qaida could only exhaust the Americans in Iraq and Afghanistan. Such attrition, bad as it was, could not convince the US to make cardinal and humiliating concessions, such as leaving the bases in Saudi Arabia or deserting Israel. Worse, as al-Qaida insisted that evicting the West from the Middle East is merely the first step in a plan of world conquest, total withdrawal from the Middle East was and still is politically impossible. In other words, the terrorist gamble, successful as it was, was a trap for al-Qaida even more than for the US, because it led the terrorist organization into a war of attrition in which it could not win.Attrition is a double-edged sword.Al-Qaida power was finally eroded to such a degree as to make the organization ineffective. With bin Laden’s death by bullets of US Navy Seals, al-Qaida lost its charismatic leader and founder.Fighting in vast geographical areas, with a system of command and control that was weak from the outset, al-Qaida has finally disintegrated. The advent of Islamic State and its schism with al-Qaida led to an internal jihadi war in Syria.Hidden somewhere on the Pakistani-Afghan border, bin Laden’s successor, Ayman al-Zawahiri, gradually became irrelevant. The war that he and bin Laden launched with their terrorist gamble finally led to their own undoing.Even from a larger ideological point of view, it was a failure, as the idea of global jihad did not advance even one inch.The US was not evicted from the Middle East, and is still involved even in the hot zones of Iraq and Syria.Nowhere in the Middle East were the jihadists able to form a functioning government.Even Islamic State, the mightiest jihadi force, was able to conquer territory only in failed states, mostly empty desert, and is in constant decline.Retrospectively, for all jihadists, the gamble of 9/11 was a total loss. The writer is a military historian and a senior lecturer in general history and East Asian studies, the Hebrew University of Jerusalem