The peace process need not be dead

The ideas are not necessarily new – but the environment is. 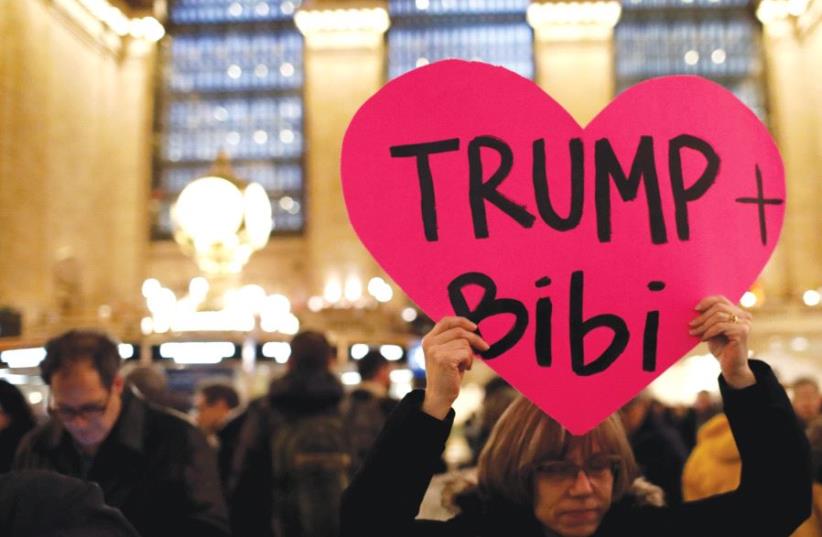 WHAT DID they talk about?
(photo credit: REUTERS)
Advertisement
Looking from the outside, one can easily get the impression that the Israeli-Palestinian peace process is, if not dead, at least in a state of deep hibernation.There are valid reasons for this – not only the Palestinian leadership’s perennial refusal to engage Israel in meaningful negotiations, preferring to turn to the UN and other international bodies in order to create political facts favorable to them – but also because the present chaotic reality in the broader Middle East has made it abundantly clear to all but the irredeemably blinkered that solving the Palestinian problem, important as it is to the parties directly concerned, i.e. Israel and the Palestinians, is not the cause of instability and violence in the region.Contrary to appearances, however, and thanks to Israeli efforts on the one hand and the advent of a new American administration on the other, there may actually be now a new opportunity to reach, if not yet a complete and conclusive solution to the conflict (which isn’t on the cards anyway) then at least ways to address some of its most negative aspects.In a January 12 op-ed in The Washington Post, veteran peace negotiator Dennis Ross and Stuart Eizenstat, president Clinton’s deputy treasury secretary, pointed out that while the “realities on the ground and political and psychological gaps between Israelis and Palestinians make a comprehensive two-state agreement illusory at this time” – there could nevertheless be interim ways to achieve progress, such as concrete economic steps and limiting Israeli settlement activity mainly to the parameters set forth at the time by president George W. Bush’s agreement with prime minister Ariel Sharon, namely in the large settlement blocs and Jerusalem.Not having been the proverbial “fly on the wall” in last month’s Trump-Netanyahu meeting (not the press conference which prudently took place before the meeting so as to avoid getting into particulars) one may assume that this was an opportunity for Israel’s prime minister to unfurl a more detailed outline of his ideas for advancing the peace process, including vital aspects of Israel’s security, defensible borders, economic cooperation, eventual Palestinian self-government, Israeli settlements and Jerusalem, among others.As to the settlements, as Ross and Eizenstat pointed out, and contrary to Palestinian disinformation, these in fact constitute less than 5% of the “West Bank” – nor would they impede the territorial contiguity of a future Palestinian state. Indeed, under Netanyahu only a small percentage of settlement expansion has occurred in the isolated settlements, i.e.Those outside of the large, mainly security-related blocs which are expected to remain part of Israel in any case. The above “outline” may also have made it clear that Israel does not intend to annex most of Judea and Samaria (a.k.a the “West Bank”) and that it adheres in principle to the “two-state” formula.With the proviso that though present circumstances in the Middle East, with Islamist jihadism wreaking havoc and Iran and its proxies threatening Israel’s borders, plus the near certainty that a Palestinian state would in short order fall under the rule of Hamas, make the creation of a Palestinian state here and now an unacceptable option, while not ruling out, however, its ultimate realization.In the meantime, Israel, with the help of the US, would take steps to promote greater Palestinian prosperity and governance. Another important element in Netanyahu’s concept would be an active inter-Arab input in the peace process prompted by mutual concerns about Iran’s aggressive designs in the regions.Judging by President Trump’s public statements, he doesn’t seem to be at odds with many of the above ideas and the steps which his administration has taken in this respect, including the recent visit of Jason Greenblatt, his special representative for international negotiations to Jerusalem and Ramallah, will be helpful in gauging the chances for moving forward. The president’s invitation to Mahmoud Abbas (Abu Mazen), the Palestinian president, can thus also be seen as a positive sign.The ideas are not necessarily new – but the environment is.As Ha’aretz reported, six months ago Netanyahu had prepared a draft proposal for regional peace intended for a summit with Egyptian President Abdel Fattah Sisi and possibly Jordan’s King Abdullah which included, inter alia, the two-state solution, a call for an “end to conflict and finality of all claims,” an appeal to the Palestinians “to begin direct, bilateral negotiations without preconditions,” as well as a certain curtailment of Israel’s settlement activities.Though the above initiative ultimately foundered for a number of reasons, including Palestinian intransigence, Israeli domestic politics and disagreements with then US secretary of state John Kerry about the nature of the proposed meeting (Kerry wanted a full-fledged international conference, to which Netanyahu objected), its principles probably found their way into the ideas discussed at the White House.Israel doesn’t want to rule over another people, nor does it intend to be faced with the dilemma of having to choose between the impossible, viz. a Palestinian irredentist state now and a “one state” solution, negating its Jewish and democratic character forever. It wants to advance on the peace front and is willing to make sacrifices for that – but will the Palestinians? The author served twice as Israel’s ambassador to the United States and was a member of the delegation negotiating with the Jordanians and Palestinians after the Madrid Peace Conference.