What we can and should be aware of is that once there was in Israel one prime minister who advocated and believed in restraint, compromise and moderation, and that his road was not taken. 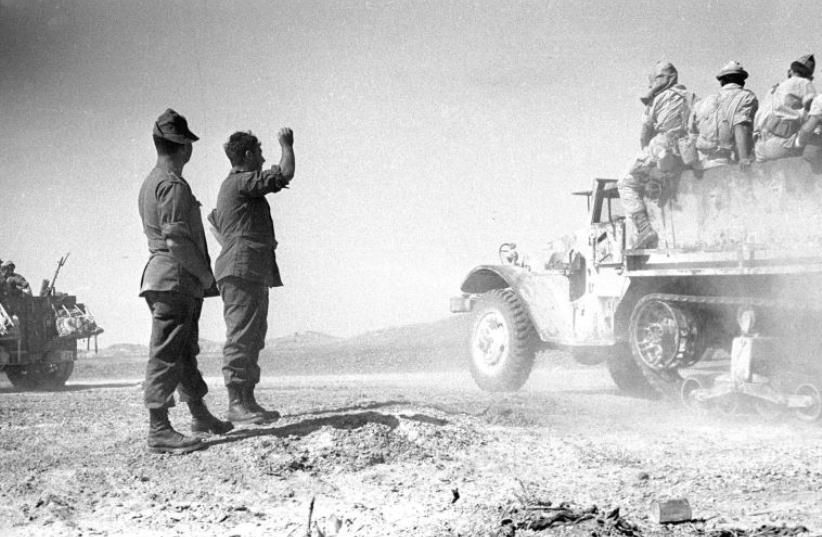 ISRAEL SOLDIERS on the way to the front line in Sinai in 1956.
(photo credit: REUTERS)
Advertisement
Moshe Sharett, Israel’s first foreign minister (1948-1956) and second prime minister (1954-1955), died twice. He physically left this world 50 years ago on July 7, 1965, but one could say that politically he died much earlier when his formidable rival, prime minister David Ben-Gurion, dismissed him from his Cabinet on June 18, 1956.Although Sharett had not remained idle since his first, political “death” – in fact, he died while actively and successfully functioning as the chairman of the World Zionist Oganization and the Jewish Agency – he was clearly a man deeply frustrated and depressed throughout his last nine years. It seems he was too strong to calmly accept his abrupt, complete distancing from his life’s calling – standing at the helm of the political front of the Yishuv for 15 years as the head of the Jewish Agency’s political department (1933-1948), and then as the foreign minister of the newly born Jewish state for eight years.Sharett the man, the statesman, his deeds, his achievements and failures have been clearly and quite naturally almost completely forgotten. Not only was he the first Israeli prime minister to have died; he left the Israeli scene so early that the vast majority of Israelis now alive were born or immigrated into Israel after his disappearance from public consciousness.The 20 shekel bill carrying his picture and excerpts of one of his great speeches, the many streets, suburbs and foundations all over the country carrying his name prompt nobody to ask: Who was this man, after all? However, in the main it was not chronology which made a major contribution toward Sharett’s absence from the active national memory, but his staunch “dovish” political line, which he pursued consistently as a foreign and prime minister.While along the pre-state years at the Jewish Agency executive he and the Agency’s chairman Ben-Gurion successfully cooperated in the common Zionist struggle to achieve Jewish statehood in Palestine, it soon became clear that once the great aim has been achieved, a constantly widening rift has occurred between No. 1 and No. 2 of the state and of the Israeli Labor Party leadership.While prime minister and defense minister Ben-Gurion, who conducted IDF’s successful fighting in the War of Independence, reasoned that in view of the Arab vengeful feelings and cries for “a second round,” Israel’s Arab neighbors should be time and again reminded of Israel’s military prowess, and consequently favored a policy of harsh military retaliation following Arab terrorist infiltration into Israel, not so foreign minister Sharett.SHARETT THOUGHT that for the time being, Arab cries for a second round were irrelevant, for it would take them several years to rebuild their armies. Israel, he reasoned, should use these years for toning down Arab intransigence; any military blow dealt by the IDF to an Arab neighbor cannot but revive and deepen animosity, thus if Israel indeed sought peace, it should endeavor to lower the flames of hatred and vengeance, not intensify them. “Can Israel live by the sword forever?” he asked.The Sharett-Ben-Gurion controversy was not conducted between equal forces, for the whole Israeli military establishment, headed by charismatic chief of staff Moshe Dayan, stood firmly behind the defense minister. Dayan, too, for his part, favored a second round – but an Israeli one. He reasoned that the War of Independence had really not ended and that Isral’s borders – the “green line” – were absurd and untenable. What’s more, in view of the Egyptian-Czech/Soviet arms deal of 1955, an Israeli second round, or “preventive war,” had become inevitable.That Dayan succeeded in convincing Ben-Gurion to accept his prognosis and plans is well documented. Obviously, it sealed Sharett’s ouster from the political arena, for – and this too is well documented – Sharett succeeded more than once to convince the majority of Cabinet ministers to vote down Ben-Gurion’s and Dayan’s proposals for mounting military operations against an Arab country (the most famous case was Sharett’s success in toppling Ben-Gurion’s proposal to occupy the Gaza Strip in March 1955.) If a preventive war were to be mounted, what if, when brought to the Cabinet for approval, Sharett succeeded in negating it? Sharett had to go.Israel’s first preventive war – firmly opposed by Sharett – was ultimately and successfully mounted in October 1956 – the Sinai Campaign. Sharett considered himself one of its casualties. Advocates of the 1956 preventive war correctly point to quite a number of its political, military and economic gains. They somehow tend to ignore the series Israel’s future wars, which perhaps were initiated by the first “war of choice” of 1956.History’s dictionary lacks the small, useful word “if.” It is impossible to know what kind of Israel we would have today if Sharett’s anti-escalationist logic, not Ben-Gurion and Dayan’s escalationist doctrine, had the upper hand in the ‘50s.What we can and should be aware of is that once there was in Israel one prime minister who advocated and believed in restraint, compromise and moderation, and that his road was not taken.The author is the son of the former prime minister.