Egypt under the leadership of President Abdel-Fattah el-Sisi has emerged as one of the most important “countries of the region” that can play an important role in maintaining regional stability. 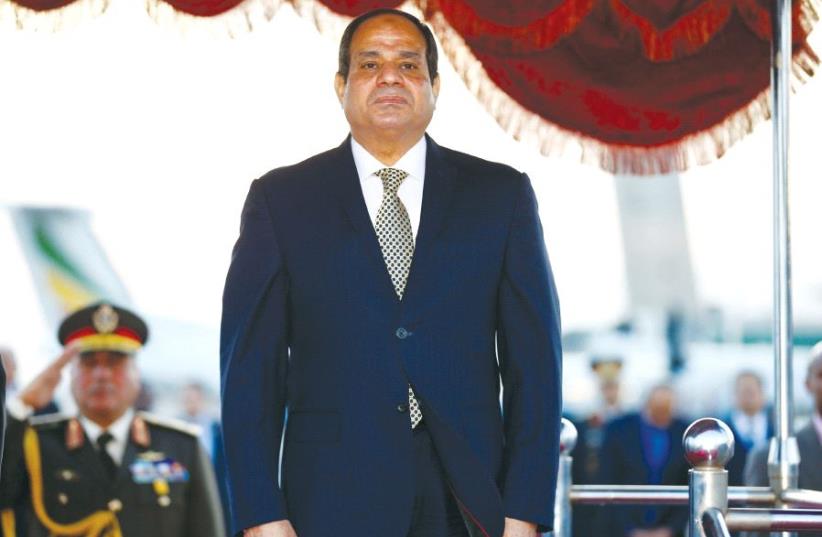 Abdel Fattah al-Sisi
(photo credit: REUTERS)
Advertisement
In recent days there has been talk of a regional initiative to advance peace between Israel and the Palestinians. On Sunday ahead of the weekly cabinet meeting, Prime Minister Netanyahu said that he and US President Donald Trump agreed on the need for regional partners to be involved in any possible future negotiations with the Palestinians.The need to rebuff Iran, said Netanyahu, has provided “a basis for the growing regional interests that are forming among Israel, the US and countries of the region.”
Sisi urges Israel to end regional instability by making peace with the Palestinians
Egypt under the leadership of President Abdel-Fattah el-Sisi has emerged as one of the most important “countries of the region” that can play an important role in maintaining regional stability. Israel has a clear interest in taking advantage of the Sisi era to cultivate deeper ties and cooperation with Egypt.A number of factors have come together to bring about a significant uptick in relations between Israel and Egypt, as noted by Ephraim Kam of the Institute for National Security Studies in the institute’s 2016-2017 strategic survey for Israel, which was published at the end of 2016.The Egyptian president could have resorted to the ageold tactic preferred by many Arab autocrats of deflecting criticism from themselves by attacking Israel. But Sisi has not.Israel has also worked together with Egypt in fighting ISIS or its affiliated groups, such as jihadist Beduin, veterans of Egyptian terrorist organizations, former members of Hamas from the Gaza Strip, and foreign volunteers who entered Sinai from outside Egypt.In January, Sisi revealed that there are about 25,000 Egyptian troops operating in the peninsula. Egypt has also deployed F-16 fighter planes, Apache helicopters and tanks in northern Sinai, with Israel’s agreement.This sharp rise in the number of Egyptian forces and arms operating in Sinai is the result of cooperation between Israel and Egypt. Israel must give its permission for the introduction of troops and weapons to Sinai beyond the amount stipulated in the peace accords between the two countries that was signed at Camp David nearly four decades ago. Israel has been forthcoming on this and has also reportedly been sharing with Egyptians intelligence information on terrorist bases in Sinai.Improved relations between Israel and Egypt are also reflected in the Sisi regime’s attitude to the peace treaty with Israel. Sisi, like Mubarak before him, sees peace with Israel as a strategic asset. But, unlike Mubarak, he also seems to have a positive attitude to normalization and sees benefits not only in military ties, but also political and economic ties.Sisi reinstated the Egyptian ambassador to Israel in early 2016 and in July, Egyptian foreign minister Sameh Shoukry made a much-publicized visit to Israel, the first of its kind in nine years, to push for Israeli-Palestinian negotiations. Upon returning to Egypt, Shoukry visited a top-ranked Cairo high school and reportedly told students there that he refuses to define Israel’s military actions against Palestinians as terrorism, though his office later issued a clarification.Egypt has a vested interest in promoting normalization between Israel and other Arab nations so as not to remain the only Arab state cooperating so closely with the Jewish state.Sisi participated in a secret summit together with Jordan’s King Abdullah, then-US secretary of state John Kerry and Netanyahu during which ideas were presented on how the Gulf States, Jordan and Egypt could help promote a regional peace initiative.Netanyahu raised the idea of a regional initiative during his press conference last week in Washington with President Donald Trump. Egypt’s participation in such an initiative is crucial to its success.Sisi’s attempts to emphasize the positive aspects of relations with Israel have been met with skepticism inside Egypt. Large swathes of Egypt’s population from Nasserites and left-wing activists to trade union members and Islamists are hostile to the Jewish state. However, improved relations with the Palestinians achieved via a regional initiative together with Sisi’s positive leadership could bring about a sea change in Egyptian public opinion over time.The Sisi regime presents a unique opportunity. Israel should welcome the Sisi era.