The third counter-wave to democracy and liberalism

Eyes are now set on the upcoming elections in the Netherlands, France and Germany, in which rightwing candidates are set to gain strength or even control of the government. 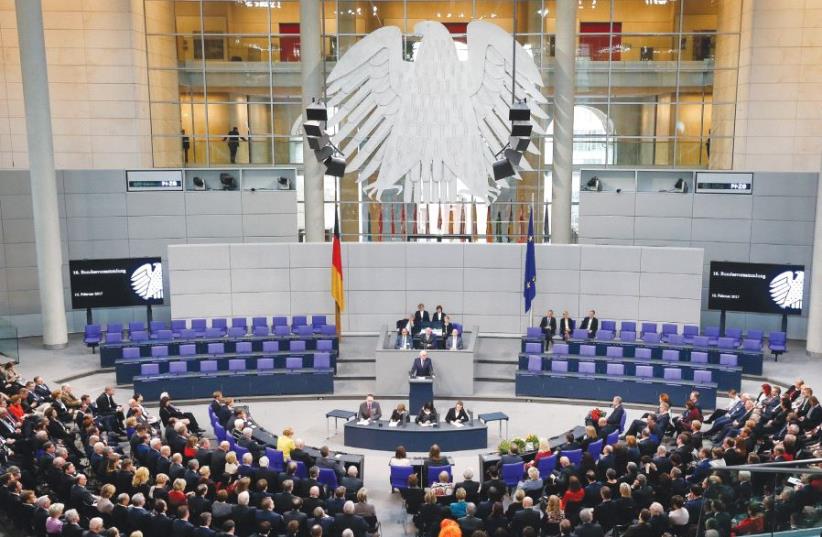 GERMAN PRESIDENT-ELECT Frank-Walter Steinmeier gives a speech after the first round of voting in the German presidential election at the Reichstag in Berlin last month. But are dark, undemocratic clouds gathering?
(photo credit: REUTERS)
Advertisement
It is now undeniable that Britain’s decision to leave the European Union and Donald Trump’s election as president of the United States are part of a much broader global change. The coming to power of conservative right-wing governments in Hungary, Poland and the Philippines; the increased strength and influence of Russian President Vladimir Putin; the draconian steps taken by President Recep Tayyip Erdogan in Turkey, and the iron fist of President Abdel Fattah Sisi in Egypt are all part of this phenomenon. Israel can also be added to this ignominious list.Eyes are now set on the upcoming elections in the Netherlands, France and Germany, in which rightwing candidates are set to gain strength or even control of the government.The global rise of the Right poses a grave threat to liberal values, and in some cases could even lead to the collapse of democratic regimes. The process can be traced to the early 2000s, when, according to political scientist Larry Diamond, 27 democratic governments collapsed. Freedom House shows that in 2000, 63% of the world’s population lived under democratic regimes, but by 2013, this percentage dropped to 40%.Scholars and journalists quickly labeled this “the end of liberalism” or “the collapse of the global liberal order.”The reasons for this phenomenon are diverse: globalization, which made it possible for corporations to accumulate tremendous wealth at the expense of ordinary citizens and led to the loss of jobs due to factory relocations to cheap labor countries; the influx of millions of refugees to first-world countries, as a result of civil wars, unemployment and famine, has threatened traditional demographic divisions; and widespread terrorism has re-awakened deep-rooted fears and prompted isolationism.These changes have had two main outcomes: first, hopes for “strong” regimes and charismatic leaders who can bring order and counter such threats. Second, a strengthening of local identities, whether through narrow-minded intolerant nationalism bordering on fascism in countries that enjoy territorial legitimacy (in the West), or through religious fundamentalism in others (in parts of Africa and the Middle East).In retrospect, the outcome is not entirely unexpected.Samuel Huntington, who analyzed the third wave of democracy in global history – which began in the mid-1970s in Portugal and peaked with the collapse of the Soviet Union – argued that each of the two previous waves of democratization was followed by a counter- wave: Between 1820 and 1922, 29 democracies were established. The counter-wave was initiated in 1922 with the rise to power of Benito Mussolini in Italy and continued in 1933 with the Nazi regime in Germany.Democracy’s second wave began after World War II, and reached its peak in 1962. During that period, the number of democracies increased to 36. This, too, was followed by a counter-wave, between 1962 and 1975, reducing the number of democracies to 30 (while not a significant decline in absolute terms, this still was a 20% decline).In democracy’s third wave, which began in Portugal in 1974 and ended in 1990, 30 more countries became democracies. According to Huntington’s analysis, the counter-wave to each wave of democracy was the result of anti-liberal and anti-democratic political, cultural and societal forces.On the one hand, this approach offers some optimism, as the waves are related and a positive wave is expected to follow every negative wave. This approach is, however, beleaguered by two problems: first, based on the past, the transition from one wave to another occurs only after a devastating war (World War II) or revolution (the collapse of the Soviet Union). Should democracy’s fourth wave actually take place, it may likely begin only after a major catastrophe of as yet unforeseeable proportions. Second, there is no way to predict the duration of the current wave. In the past, counter-waves never lasted longer than two decades, but we are not even sure if the current anti-democratic wave, if it indeed commenced in the early 2000s, has even reached its peak. In any case, this counter-wave seems to be here to stay for the coming years.These developments should rally all liberal forces from all parts of the political spectrum into action.It would first be wise to recognize the enormity of the threat to liberal values, which until recently were considered universal values. Actions to confront these threats should be taken at the national level, but transnational coalitions are also necessary to defend a joint liberal, democratic vision. Liberal and democratic voices are everywhere, including Israel, and it’s high time that they start acting in concert. After all, even in the US, more than half of the votes in the recent election were cast for a candidate who represented an alternative worldview and not the worldview that won the elections. This, if you will, is an alternative fact, although in this case it is true. Being aware of these global trends is the first step toward mobilizing all the liberal forces in Israel, and the world at large, in order to ensure that the third counter-wave will become a transitional phenomenon.The author teaches at the Department of Islamic and Middle Eastern Studies at the Hebrew University of Jerusalem and is a board member of Mitvim – the Israeli Institute for Regional Foreign Policies.