The two-state solution is dead! Long live the quest for peace!

The good news is that we are freed from this no-win situation, and now new ideas can be considered that will have a far greater likelihood of producing peaceful relations. 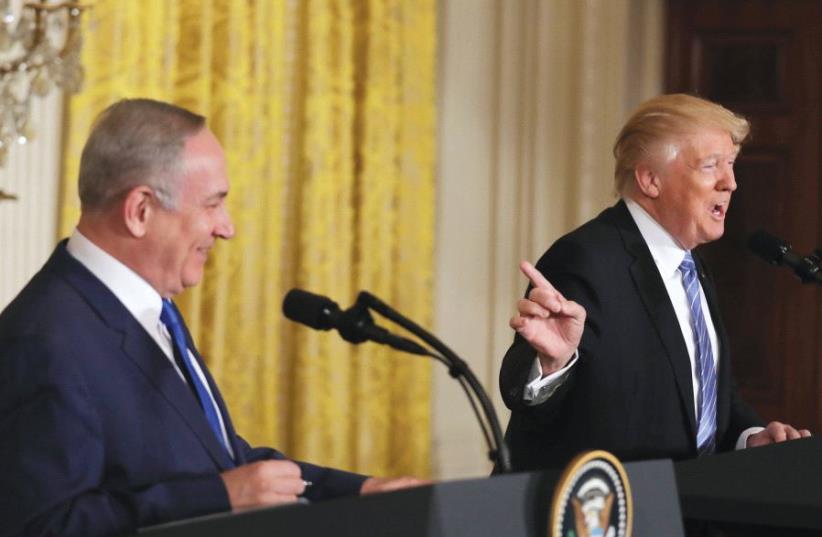 Benjamin Netanyahu and Donald Trump at a White House press conference in Washington , US on May 15, 2017
(photo credit: REUTERS)
Advertisement
Anyone interested in furthering the possibilities for peace between Israelis and Palestinians should be cheering the news that the Trump administration has backed away from the two-state solution as the required template for success. This finally ends the quandary noted by Einstein as part of his definition of insanity: doing the same thing over and over and expecting different results. The repeated failures to obtain bilateral agreement exposed very clearly for any who chose to look that there was simply no willingness on the part of the Palestinian leadership to say “yes.”Regardless of the reasons – and here the Palestinian leadership might have entrapped themselves by instilling maximalist expectations among their people – the fact remains that no Palestinian Authority leader has had the mandate to accept a deal that leaves a sovereign Jewish state in place once the ink has dried. This is the dirty little secret of the entire drama: ultimately, the curtain could not fall on a last scene where two peoples agree to live in a condition of mutual recognition and acceptance, not to mention peace.That might be a shame, but it is the inescapable reality.The good news is that we are freed from this no-win situation, and now new ideas can be considered that will have a far greater likelihood of producing peaceful relations between Israelis and Palestinians, better economic conditions for the Palestinians and undiminished security for Israelis.In evaluating these ideas, it is important to set priorities for the future. Looking at the Palestinian situation, one must conclude that their own priorities would favor enhancing their quality of life over political solutions. After all, if Palestinian sovereignty were so crucial, it would have happened already, based on the generous offers proffered by previous Israeli leaders.Aside from an entrenched, and by most accounts, corrupt leadership’s interest in maintaining their fiefdoms, most Palestinians, disabused of the pipe dream of moving into Haifa, Jaffa or Ramle (whether their family ever lived there or not), will most likely want better job opportunities, better housing and better prospects for the future. When sovereignty for a Palestinian state is not the required outcome of all discussions, these more mundane but closer-to-the-bone issues can be tackled in earnest.Ironically, one of the best ways they can be addressed is under the auspices of Israeli sovereignty.While seemingly counter-intuitive, it makes great sense when one looks at the immense progress made by Palestinians living in Judea and Samaria under direct Israeli control from 1967 until Oslo in such areas as literacy and infant mortality.There are actually many Palestinian voices that favor living under Israeli sovereignty, or living in a state of permanent autonomy that is not sovereign. They see the quality of life enjoyed by Israel’s Arab citizens and the Druse of the Golan Heights who have autonomy and benefits, even without citizenship, and they realize that Israel has been a benign sovereign to its non-Jews.From Israel’s perspective, the move away from the two-state conundrum is likely to unleash a torrent of creative energy aimed at creating better relations, including better living conditions for Palestinians.For Israelis the goal has always been peacefulness, and this might be best facilitated now when all roads need not lead to Palestinian sovereignty.One of the lesser appreciated needs and therefore greater opportunities for Israel is the need to remedy the condition of the nearly half-million Jewish residents of Judea and Samaria who have been living in the netherworld of the Civilian Administration.If these areas came under Israeli law, there would be greater opportunities to build affordable housing, bring in industry (benefiting both Jews and Palestinians) and overall to enhance the attractiveness of Judea and Samaria as a destination for normalized residence.Other possibilities such as the limited autonomy of an “emirate” model should be considered, all of which will allow for a multiplicity of Palestinian voices to be heard.Of course, the news of the overdue death of the TSS will be met with shock and horror in Europe, but with American acquiescence, Europe’s is an impotent rage. Similarly, the Left is likely to try to demonize Israel for this new state of affairs, but that is merely finding new grist for the mill of ongoing anti-Israel hostility.Ultimately, the new scenario will separate those seeking to punish Israel with the tough love of an imposed unrealistic idea, and those who want to make life here better for all concerned.The two-state solution is dead! Long live the quest for peace! The author is an executive board member of Im Tirtzu and a board member of the Israel Independence Fund.