Think About It: The US election – a personal perspective

The current US elections are probably the wackiest ever to have taken place in America. 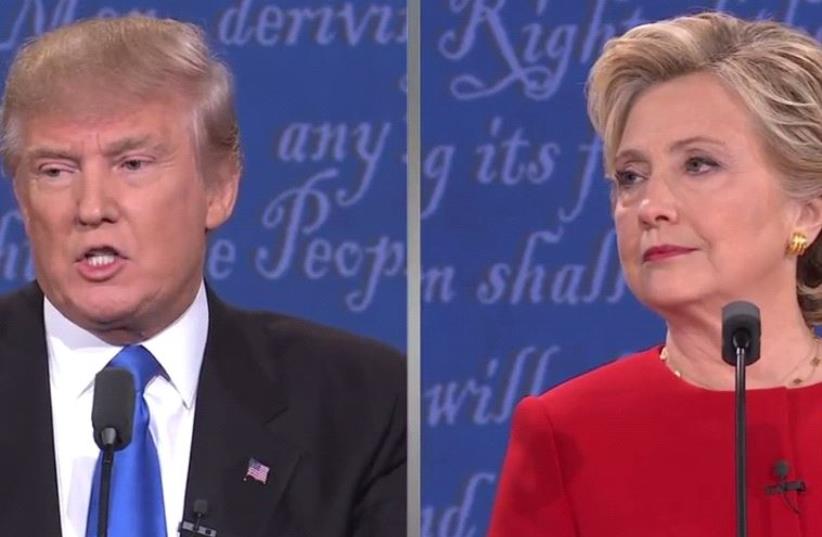 Trump and Clinton at the first presidential debate
(photo credit: screenshot)
Advertisement
I am an American citizen by birth – born in Mandatory Palestine to American parents.The only time I spent a significant amount of time in the US, however, was in 1945/6 when I was two to three years old. My parents decided to take advantage of an initiative by the US State Department in the summer of 1945 to charter the Swedish MS Gripsholm to collect American expatriates who had been stranded around the Mediterranean during World War II and take them to New York – and visit relatives in the US whom they had not seen since making aliya in 1932. We returned to Palestine in the summer of 1946 on the Marine Carp, a converted troop ship.My only memories from that trip are of climbing up and down ship ladders; the house in Oak Park, Chicago, where part of my father’s family lived; my first ever flight, to visit relatives in Atlanta; squirrels in New York’s Central Park; and sitting with my parents and brother in the third mezzanine of Radio City Music Hall, several hours before we embarked on the Marine Carp to return to Palestine, yelling at the top of my voice: “bubas (dolls) dancing!” Not bad for memories from 70 years ago, but not enough to give me the moral right to vote in the US.Though as the daughter of liberal parents I always tended to be a Democrat sympathizer, I never took much interest in US elections, possibly because I am a Europhile with social-democratic leanings and the US always represented to me an extreme capitalist country, with unbearable gaps between rich and poor (unfortunately Israel is also there today), and a majority that opposes the welfare state in general and national health insurance in particular.I started taking more serious interest in the US elections when in 2012 Benjamin Netanyahu – as prime minister of Israel – crassly intervened in support of the Republican candidate. I resented his doing so in my name.The current US elections are probably the wackiest ever to have taken place in America – a reflection of the confusing state of the American democratic system.Though I certainly like the thought that for the first time a woman might be elected president of the US, and of an Angela Merkel/Theresa May/Hillary Clinton triumvirate of tough women playing a major role in world affairs, Clinton isn’t my dream president, merely much less objectionable than Donald Trump, who is my idea of a chauvinist nightmare.The problem in my eyes is not that Trump is running for president on behalf of the Republican Party, which started going off course long before Trump turned up out of the blue. The problem is Trump himself – a politically incorrect, flakey personality, who probably wouldn’t pass a first-year university exam in either American domestic or foreign affairs, has no real solutions for Americans who have failed to adapt to the globalized economy, is more of a rabble rouser than a leader, treats women as sex objects, appears to detest blacks, Hispanics and Muslims and whose attitude to Jews is ambivalent (despite the fact that his daughter Ivanka is a converted Jewess).In general I distrust people who use the Chapter 11 bankruptcy provisions to resolve business problems at the expense of those to whom they owe money. Four Trump-owned corporations filed for bankruptcy, and Trump himself has managed to avoid paying taxes for close to 20 years following one such bankruptcy. He apparently acted within the provisions of the law, but what his conduct conveys is an extremely selfish style, which might suit a fickle, shameless businessman, but not the US president and the purported leader of the free world.I do not know how the votes of Israelis residents holding US citizenship will divide between Clinton and Trump, but I must admit that the thought of Israeli Jews (or any Jews for that matter) voting for Trump makes me squirm, even though I know several of them, who are nice people.I do not doubt that they believe that voting for Trump will be to Israel’s benefit, and that Trump will be more supportive of the policies of Israel’s current right-wing government than Clinton. I also understand why right-wingers are suspicious of liberal Democrats, though I disagree with them.However, I don’t believe that Trump will move the US embassy to Jerusalem or support Israeli annexation of area C in Judea and Samaria. I do believe that the havoc he is threatening to cause in the international arena will be damaging to Israel, and that a Trump-led America, supported by Israel, will push Europe even further away from Israel than it is today. I also believe that Trump will weaken the fabric of the US society – which will be bad for the US, for the Jews and for Israel alike.So those of you Israeli American citizens who refuse to vote for Clinton – please stay at home on election day, for all our sakes.The writer is an Israeli-born American citizen. This article was written before the second Clinton-Trump debate.