This is not how you build a wall

The reality is that the Israeli authorities are not capable of coming up with a foolproof solution that will keep its citizens safe all the time. 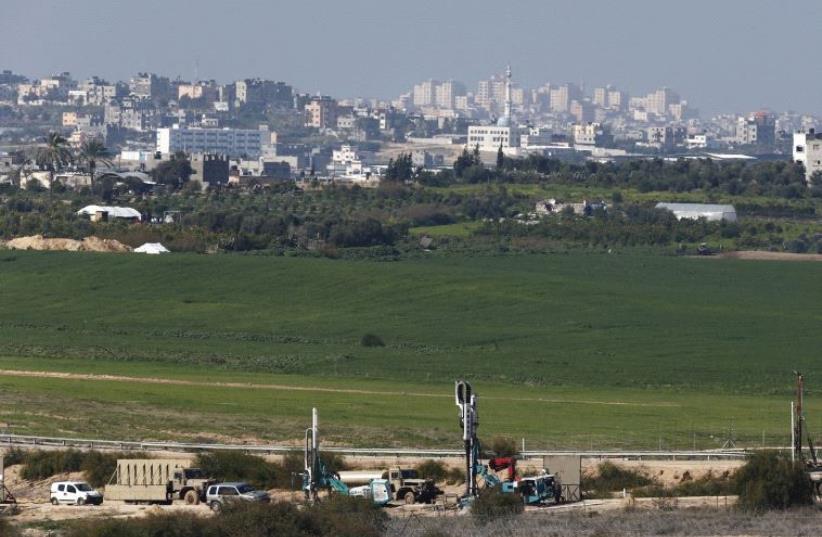 IS IT too easy to just wander over to Gaza?
(photo credit: REUTERS)
Advertisement
Last week for the third time, an Israeli citizen climbed right over the fence and entered Gaza as if he were going to Switzerland or Italy for a holiday. A year and a half ago, Hisham al-Sayed and Avera Mengistu did the same thing and the two of them are still being held by Hamas.The question is not why they did this or what they were looking for, but how is it possible that innocent citizens can so easily walk across the border between the State of Israel and territory controlled by a terrorist organization.In some respects, Hamas is much more dangerous than countries that are our official enemies. Why is it that no one is suggesting that we correct this absurdly dangerous situation? Why do we continue to allow Palestinian snipers who spend their days and nights with their weapons aimed at Israeli communities to operate freely? When the IDF withdrew from the Gaza Strip in 1994, a separation fence was built along its border with Israel. This 67-kilometer- long fence is still standing today, though improvements have been made here and there, such as the addition of observation posts. And yet still today, the fence looks more like it’s meant to keep horses or cows from wandering off the farm than keeping terrorists out. Over the years, dozens of Palestinians have crossed over the fence from Gaza into Israel, either in search of work or with plans to carry out a terrorist attack.The fence does not constitute an obstacle for Gazans who are digging tunnels toward Israeli communities in the Gaza border area. Some of the holes that were made in the fence are not mended quickly, and so additional Palestinians use them to find quick passage across the border.The situation at Zikim Beach, which lies between Israel and Gaza, is even more absurd. There’s a bit of barbed wire there that stretches out into the sea that looks more like it’s separating Herzliya from Tel Aviv than Israel from enemy territory.In light of the numerous infiltrations into Israel, and of Israelis entering Gaza, the IDF has beefed up vigilance, and additional surveillance cameras have been installed along the fence. Soldiers who are monitoring this live footage from these cameras can identify suspicious activity and alert ground forces nearby to the danger.But these cameras don’t capture everything, and even when they do, oftentimes our forces do not reach the scene in time to apprehend the perpetrators. Just as in the West Bank, not enough is being done to secure this border. Following the violent outbreak that occurred in October 2015, the IDF made a decision to rebuild the fence between Gaza and Israel, raising it to 3-meters high. This doesn’t, however, actually dramatically alter the level of protection that it offers.Another proposal is to replace the Gaza fence with a separation barrier similar to the one that was built on Israel’s border with Egypt. This massive barrier has a thick concrete base that goes down deep into the Earth, and stands seven meters high. In other words, no one is going under, over or through this barrier in either direction.The cost of building such a barrier is extremely high, but the Gaza border is not long, and the work could be done easily and relatively quickly.We must also note, though, that sometimes leaving a neglected fence in disrepair can help facilitate intelligence gathering.Information is often covertly passed from agents to their handlers through security fences.These benefits, however, do not outweigh the risk of failing to build a proper barrier. Intelligence handlers are creative and will always manage to find ways of communicating with their agents.Intelligence agencies take advantage of technological devices to overcome physical limitations. This may make their lives a little more complex, but taking responsibility for the security of our citizens requires us to take this dramatic step.The multiple shootings that have taken place in recent months on roads in Judea and Samaria are another worrying phenomenon that the security establishment is having a hard time solving. According to data made public by the Shin Bet (Israel Security Agency), the number of terrorism-related incidents, i.e. shootings, firebombings, and stone throwing that occurred in the territories over the last few months is similar to previous months, averaging one to two attacks a month.The current wave of terrorism is not so different from previous periods in terms of range and the extent of attacks. Most of the terrorists have been individuals who’ve carried out unorganized attacks on their own with improvised weapons, and who have no headquarters. It’s much harder to prevent spontaneous attacks, since there is no way to gather intelligence or recognize suspicious activity.There are no separation fences within Judea and Samaria. Hundreds of thousands of Israelis live in proximity to millions of Palestinians.They all drive on the same roads, cross over the same valleys and up the same hills, and cross through the same border inspection stations.Individual Palestinians are feeling more and more motivated to carry out lone-wolf attacks due to personal history or following ISIS incitement online. The hatred, Palestinian incitement and lack of any hope that a political solution will be found any time soon, just serve to fan the flames of terrorism.No intelligence service in any country can prevent 100% of spontaneous terrorist activity carried out by individuals, such as recent attacks on the roads in Judea and Samaria. No physical barrier can prevent terrorists from carrying out their evil schemes, and IDF soldiers cannot be stationed at every spot along the border, or at every curve on the road.The reality is that the Israeli authorities are not capable of coming up with a foolproof solution that will keep its citizens safe all the time. The solution to such a problem is much more complicated and deeper than just building a wall.The writer is a former brigadier-general who served as a division head in the Shin Bet.