It's possible that a high-profile push for peace will raise unrealistic expectations that, when not met, could lead to profound disappointment. 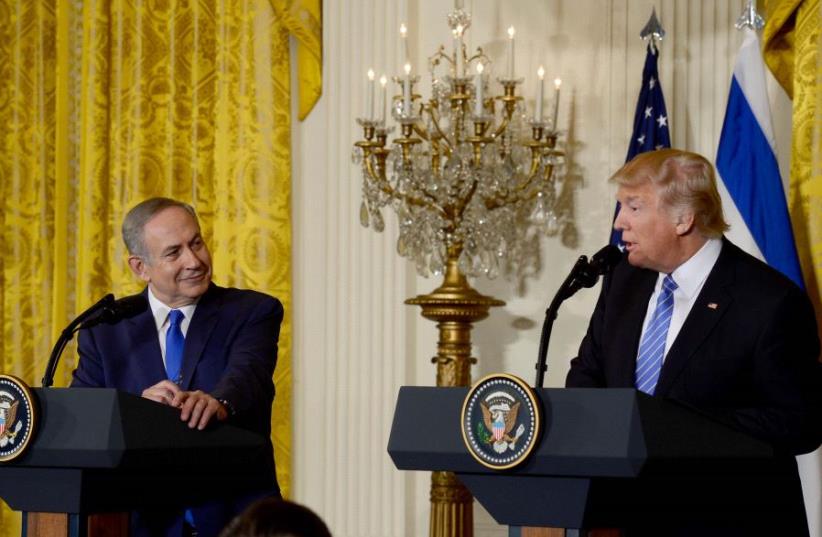 PM Netanyahu and President Trump
(photo credit: AVI OHAYON - GPO)
Advertisement
There have been a number of signs in recent days that the Trump administration believes an Israeli- Palestinian peace agreement is possible – now. Jason Greenblatt, President Donald Trump’s special representative for international negotiations, spent the last few days in Jordan attending the Arab League summit there as an observer. He met with the foreign ministers of Saudi Arabia, the United Arab Emirates, Egypt, Jordan and Tunisia to discuss efforts to move the Israeli-Palestinian diplomatic process forward. His attendance at the summit was very unusual and it demonstrated the emphasis the Trump administration places on the Israeli-Palestinian issue.In briefings about those meetings, Greenblatt underscored the potential role of the Arab world in brokering Israeli-Palestinian peace. On Wednesday, The Jerusalem Post reported that the administration is exploring whether to host a summer conference that would include Israel, the Palestinian Authority, Saudi Arabia and the Gulf States.Trump has also reportedly conveyed to Netanyahu his determination to reach an Israeli-Palestinian deal via Alan Dershowitz, the Jewish-American law scholar. “The president told me a few times he wants to get a deal between Israel and the Palestinians,” Dershowitz told Haaretz, referring to comments made to him by Trump during a chance meeting earlier this month. “He knows very well the possible elements of the deal.”Also, Israel and the Trump administration have so far failed to reach agreement regarding settlement building in Judea and Samaria. During their first joint press conference at the White House last month, Trump publicly asked Netanyahu to “hold off” on settlements for a while, apparently out of a desire to give a regional peace summit a chance. It is widely assumed that any regional summit aimed at advancing peace between Israel and the Palestinians would necessitate some sort of settlement freeze, at the very least outside settlement blocs.And the White House has invited Palestinian Authority President Mahmoud Abbas to Washington in mid-April, which seems to signal a desire to make the Palestinians an integral part of the process.However, it is not clear why the Trump administration believes it will succeed where other US leaders have failed. The core issues – Jerusalem, security arrangements, refugees – remain as intractable as ever. A huge chasm separates the two sides on these issues and others, and the distance has not decreased over time.The Palestinian leadership remains divided between Hamas in Gaza and Fatah in the West Bank. Elections have not taken place since 2006. Abbas is in the 11th year of a four-year term. And many of the millions of Palestinian refugees living in Lebanon, Jordan and elsewhere feel they are not represented by the present Palestinian leadership.For many Palestinians, the conflict is not just about territory in Judea, Samaria and Gaza – it is about the very legitimacy of a Jewish state within any borders.Further complicating matters is the ambiguity of the Trump administration’s position on the contour of the peace talks and their final goal. Under the circumstances, it would be worthwhile taking the advice of two men with very different backgrounds but with the same message.Gilead Sher, a senior fellow at the Institute of National Security Studies in Tel Aviv and a former chief of staff to Ehud Olmert when he served as prime minister, and Sen. Tom Cotton (R-Arkansas) have both cautioned against rushing into a new, highly publicized round of Israeli-Palestinian peace talks.Cotton, who will be speaking at the annual Jerusalem Post Conference in New York on May 7, told the Post that “the timing for a splashy, high-profile, new set of a negotiations does not seem to be right. Quiet confidence-building measures might be appropriate.”Sher also warned against a high-profile peace initiative unless it is part of a bigger diplomatic context. This is the kind of “pyrotechnics” that could be harmful if it does not lead to anything meaningful.Any serious attempt to begin a process of normalization that includes the Palestinians, Egypt, Jordan, Saudi Arabia and the Gulf states is a positive development that should be welcomed.However, we must enter into this initiative with eyes wide open and aware of the potential dangers, including the possibility that a high-profile push for peace will raise unrealistic expectations that, when not met, could lead to profound disappointment.