Seeking psychological treatment from therapists whose views and values do not contradict the Torah is sanctioned, and is even considered a mitzva. 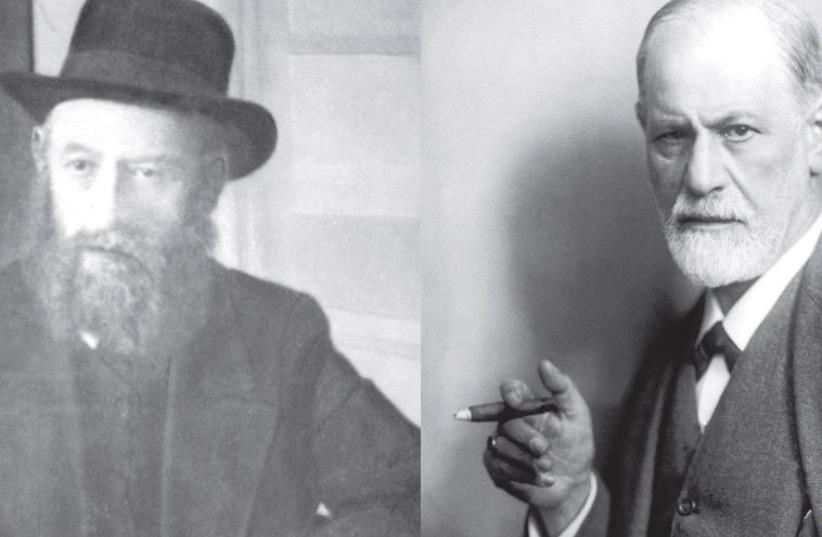 Rabbi Shalom Dov-Ber Schneersohn (L) and Prof. Sigmund Freud (R)
(photo credit: Wikimedia Commons)
Advertisement
The stance of ultra-Orthodox rabbis on psychology, psychologists and psychological treatment varies from outright hostility and distrust to respect and cooperation. The former group, generally, is highly vocal in its condemnation and criticism, and their pronouncements vary from temperate, cautious criticism and advice, to ridicule and belittlement, to venomous accusations and outright prohibitions against seeking psychotherapists’ counsel.In an article that appeared several years ago in the haredi publication Kol Hahinuch (“Voice of Education”) titled “Psichologia – Terufa o Treifa” (“Psychology – Healing or Non-kosher”), among the statements made were: (1) Even those that are in need of mental health aid should avoid seeking psychological treatment; (2) Modern psychology is a sad collection of superficial and distorted ideas of confused people; (3) Secular psychologists’ treatment is based on denial of God and His Torah and encourages serious transgressions; (4) If we wish appropriate education for Jews, we should not learn the gentile psychology but to cleave to what the Torah teaches us.Rabbi Moses Shternbuch, a prominent haredi arbiter, opined, “Even the best therapists have nothing to offer those whose sins have brought them to depression or sadness, for the help they need is from those knowledgeable in Torah, who are the real healers of souls...Psychologists and psychiatrists steal a lot of money from the patient and let him imagine that he will be healed.” (Tshuvot Vehanhagot, 1:465) Recently, Rabbi Shternbuch was asked whether religious patients can seek treatment from religious mental health practitioners who are guided by Halacha (Jewish law) in their professional undertakings, in light of his previous psak (halachic ruling). His response was, “I spoke in general, but surely there are individuals who are Torah observant that treat according to Halacha, and it is appropriate and a mitzva to be treated by them.”The negative and critical statements mentioned above fly in the face of the views of many prominent haredi rabbis and educators.The Lubavitcher Rebbe was consulted in 1957 by a father who was concerned about his son's improper behavior. The rebbe responded, “...that in all situations concerning the hidden forces of the soul [subconscious], a considerable change can take effect unintentionally and sometimes even without any major effort on the part of the patient.” He suggested that his son continue his sessions with the psychologist. (It is a little known fact that Rabbi Shalom Dov-Ber Schneersohn, the fifth Lubavitcher rebbe, traveled from Russia to Vienna in 1902 and 1903 to consult with the famous Prof. Sigmund Freud regarding a bout of depression.) Nahum Stepansky, in his Re’eh Ve’aleyhu, Lo Yebol, wrote that the great adjudicator Rabbi Shlomo Zalman Auerbach is quoted as ruling, “It is permitted to consult with a psychologist if it will help...So what if it is the wisdom of gentiles? If there is good advice that can help, why not accept it?” Rabbi Shlomo Wolbe wrote in an article, “There is an urgent need to organize courses for practicing rabbis and educators, in order to disseminate basic knowledge of the symptoms of neurosis and psychosis and their treatment, in order that they will know to refer mentally ill people immediately to the psychiatrist. Basic knowledge will remove many prejudices.”In the weekly magazine The Haredi Camp (Mahaneh Haredi) published by the Belz Hassidim (October 2000), was an interview with Rabbi Aharon Friedman, the well-known educator and author.He was asked: “To what extent are psychologists involved in the treatment of haredi yeshiva students?” To this he answered: “I do not have the required data to answer such a question.However, as far as I know, and I very much hope and believe that this is in fact the situation, there is a certain division of labor inside the yeshiva.Regarding religious issues and those pertaining to character-improvement (middot), one seeks the advice of a wise, understanding mashgiah, who is capable of conversing with the student and having a positive influence on him.Whereas, if there is a question of an emotional weakness or illness, regarding which the mashgiah has no knowledge or experience, the right thing to do is to refer the student to professional assistance – just as one goes to a medical doctor in the case of bodily illness, or to a plumber.”The Chiba Community Mental Health Clinic of Mayenei Hayeshua Medical Center was established in January 2004 by Dr. Moshe Rothschild, who in 1990 established the Mayenei Hayeshua Medical Center in Bnei Brak.This year, the psychiatric in-patient hospital Marbeh Daat Mental Health Center was also dedicated in Bnei Brak.This is the first psychiatric hospital under haredi auspices in the world.At the dedication, many prominent haredi rabbis were present, including Shteinnan, Kanievsky, Karelitz and Zilberstein, as well as many respected heads of yeshivot.The overwhelming support from many esteemed haredi rabbis for the establishment of psychiatric facilities in the heart of Bnei Brak is testament to the great value they place on providing psychiatric and psychological help to the haredi community, and challenges the extreme fringe element's negative attitude towards psychological treatment.Seeking psychological treatment from therapists whose views and values do not contradict the Torah is sanctioned, and is even considered a mitzva.The writer is a supervising psychologist at the Marbeh Daat Mental Health Center, Mayanei Hayeshua Medical Center, Bnei Brak.