Under Iran's ayatollah, neither domestic violence nor marital rape are considered criminal offenses. 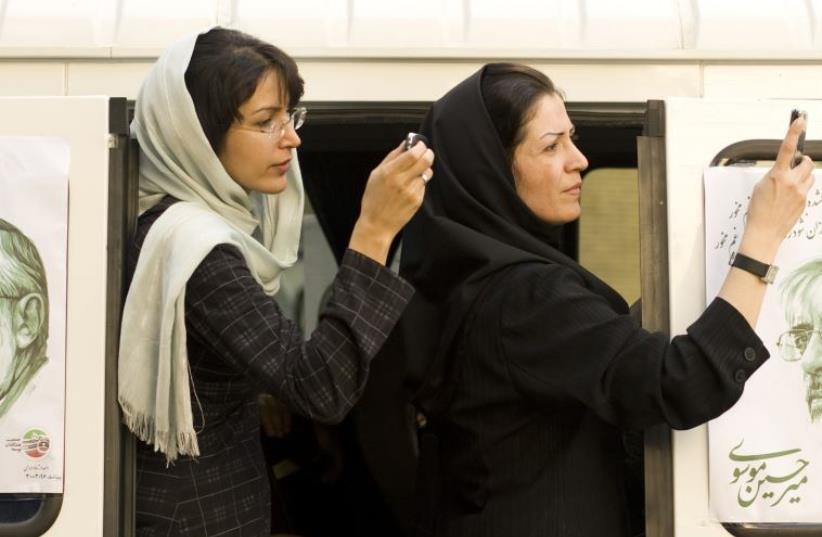 Iranian women take a picture of a presidential candidate with their mobile phones in Tehran , Iran
(photo credit: REUTERS)
Advertisement
The United Nations Commission on the Status of Women recently gathered for its annual session and with the passage of a single resolution cemented the body’s legacy of moral perversion.It deemed to condemn just one country in the world for violating the rights of women: Israel.The verdict is as nonsensical and disgraceful as it is, sadly, typical.The 45-member commission is the principal global body dedicated to the promotion of gender equality and the empowerment of women. Its members include an appalling list of nations that suppress basic legal and human rights.Chief among these abusers is Iran, which has held a seat since 2011, and whose discriminatory laws deny women equal rights in employment, mobility, inheritance and political participation. Added to that is the systematic violence that Iranian women must endure.Under the ayatollah, neither domestic violence nor marital rape are considered criminal offenses.Sitting in judgment alongside Iran are Qatar, whose legal system dictates that women must obey their husbands, and Liberia, where the World Health Organization estimates some 60% to 77% of women and girls were raped during the country’s civil war.Lest you think reform is on the horizon, the commission just added Saudi Arabia to its roster. Its credentials for becoming an international arbiter of women’s rights include excluding women from public life, treating their court testimony as half that of a man’s, and setting their ability to travel, marry, work and even access health care at the discretion of a male guardian.The UN’s founding goals of freedom, justice and peace have been scarified for the perverse political interests of a few nations whose chief pursuit is to undermine the Jewish state. Thus a commission intended to defend the rights of women can only muster a single resolution, one that condemns Israel as the “major obstacle for the advancement, self-reliance and social integration of Palestinian women.”THE UN can have no real credibility so long as it’s blind to the world’s true human rights abusers. In Gaza, Hamas systematically denies women any rights. In fact, the terrorist group’s 1988 charter states that Muslim women are important in that they “manufacture men and play a great role in guiding and educating the [new] generation.”Indeed, 29% of women in Gaza are married before the age of 18, and 13% before the age of 15. At the same time, violence against women is shockingly high, with about half of married women reporting that they are victims of some form of violence from their husbands.According to the UN – the same body that contends Israel alone is responsible for the well-being of Palestinian women – there are no specific laws or provisions under the Palestinian Authority that protect women from domestic violence and sexual violence. As a result, about 30% of women in the West Bank have been subjected to a form of violence within the household.No one is surprised that the UN has once again singled out Israel for condemnation. Nor are we surprised that nations like Iran and Qatar or China and Russia use the global body to undermine the advancement of equal and inalienable human rights.Rather, the real culprits are the countries that allow these perversions to take place. The Commission on the Status of Women resolution had a recorded vote of 30 in favor to four against (Canada, Guatemala, Israel, the United Kingdom), with 11 abstentions.Every country that supports these sorts of biased resolutions or abstains from voting against them is complicit in setting back the cause of women’s and human rights. These nations are a party to silencing the voices of women and denying their economic and political progress. Worse, they are responsible for the violence that women endure simply because of their gender.The legacy of the UN is little more than corruption, exploitation and moral abdication. To paraphrase Edmund Burke, that legacy is made possible because all that is necessary for the triumph of evil is that good nations do nothing.

The writer is a member of the WJC Diplomatic Corps and associate vice president of Israel engagement at Combined Jewish Philanthropies of Greater Boston. She previously served as the director of speechwriting for Israel’s permanent mission to the UN in New York. Follow her on Twitter, @ AvivaKlompas.