Why is the ICC prosecutor interfering in Khan al-Ahmar?

The Khan al-Ahmar situation represents a classical example of complementarity inasmuch as it addresses violations by the residents of the village of building, planning and zoning requirements. 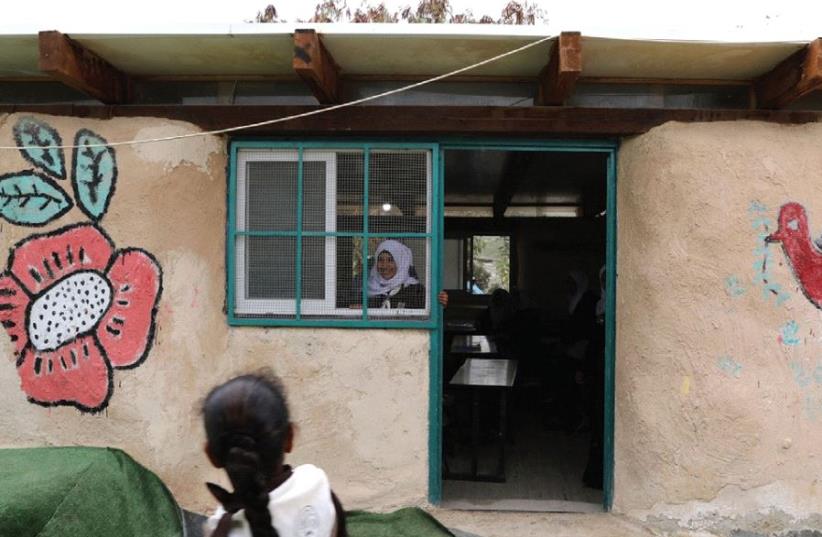 A BEDUIN SCHOOLGIRL looks out the window of her classroom at the Al-Khan al-Ahmar school, near the West Bank city of Jericho.
(photo credit: REUTERS)
Advertisement
In a somewhat irregular statement by the prosecutor of the International Criminal Court published on October 17, Fatou Bensouda saw fit to criticize Israel and voice concern over the planned evacuation of the Bedouin village Khan al-Ahmar, as well as over the continued violence at the Gaza border. She pointed out that extensive destruction of property without military necessity and population transfers in occupied territory constitute war crimes under the Rome Statute of the ICC. Recalling the fact that the ICC is conducting a preliminary examination of Palestinian allegations of war crimes by Israel’s leaders and military commanders (at the behest of the Palestinian leadership), she threatened to “take appropriate action, within the confines of the independent and impartial exercise of my mandate under the Rome Statute.” Curiously, she added that such action by her would respect the “principle of complementarity.” This statement raises a number of issues reflecting an element of ignorance on the part of the prosecutor as to the legal situation in the case of Khan al-Ahmar and the highly publicized background of repeated appeals by the residents of the village to Israel’s Supreme Court. It perhaps reflects not only a deliberate omission on her part, but also an evident and even alarming lack of the very impartiality and independence she mentions in her statement and that should guide her in fulfilling her function as ICC prosecutor. The “principle of complementarity” which she mentioned is the basic, underlying requirement of the 1998 Rome Statute of the International Criminal Court, as set out in its first article establishing the court. It determines that the exercise by the court of its jurisdiction regarding the most serious crimes of international concern “shall be complementary to national criminal jurisdiction.”This means that the ICC may not take action on a complaint referred to it if the courts at the national level are dealing, or have dealt with, the particular case. Clearly, even the ICC prosecutor, were she functioning with the due impartiality and independence she refers to, could have and should have appreciated the fact that the Khan al-Ahmar issue has been and continues to be addressed within the criminal jurisdiction exercised by Israel in its administration of the territories, and by its appropriate administrative and legal authorities and courts. IN FACT, the Khan al-Ahmar situation represents a classical example of complementarity inasmuch as it addresses violations by the residents of the village, of building, planning and zoning requirements. The issue was duly referred to and dealt with by Israel’s courts. As is widely publicized, attempts to reach an acceptable compromise regarding an alternative site close to the village – constructed in accordance with planning and zoning requirements, with connection to the electricity and water infrastructures – are still ongoing, without any need for warnings by and intervention of the ICC prosecutor.The Statute of the International Criminal Court stresses very clearly the importance of the prosecutor acting with complete impartiality, independent of any other external sources or considerations. Like any senior international civil servant, but even more so when it involves the prosecutor of the one and only International Criminal Court, the prosecutor, in the performance of her duties, is required by accepted norms and principles not to seek or receive instructions from any government or other authority, and to refrain from any action which might reflect on her position as an international official.The extensive publicity and public-relations campaigns by the Palestinian leadership – connected to their periodic and highly publicized meetings with, and complaints to, the prosecutor against any and most actions by Israel – would give the impression that the Palestinians have adopted the ICC as their own “in-house” Israel-bashing tribunal. However, besides the evident politicization and other damage caused to the court by this obsessive Palestinian “bear-hug,” the judges of the International Criminal Court (and not the prosecutor), have yet to determine whether the court indeed has jurisdiction to deal with Palestinian complaints. In fact, they have yet to determine whether the Palestinians have any standing at all before the court in light of the fact that the ICC Statute is open to states only, and the legally and politically-flawed Palestinian claims to statehood and to membership of the court have yet to be considered juridically.The fact that Prosecutor Bensouda, pursuant to the incessant Palestinian lobbying and harassment, has found it necessary to periodically issue criticism of and warnings to Israel, and to intercede in an ongoing situation regarding Khan al-Ahmar, would appear to reflect on her impartiality and independence, and as such, on her capability to fulfill the important function of ICC prosecutor. The writer served as legal counsel for the Foreign Ministry and as Israel’s ambassador to Canada. He is currently the director of the Jerusalem Center for Public Affairs International Law Program.