Why Palestinian terrorism is never a ‘justified popular uprising’

In law, in all law, such evident expressions of pure criminality can never be reconciled with any form of permissible “uprising.” 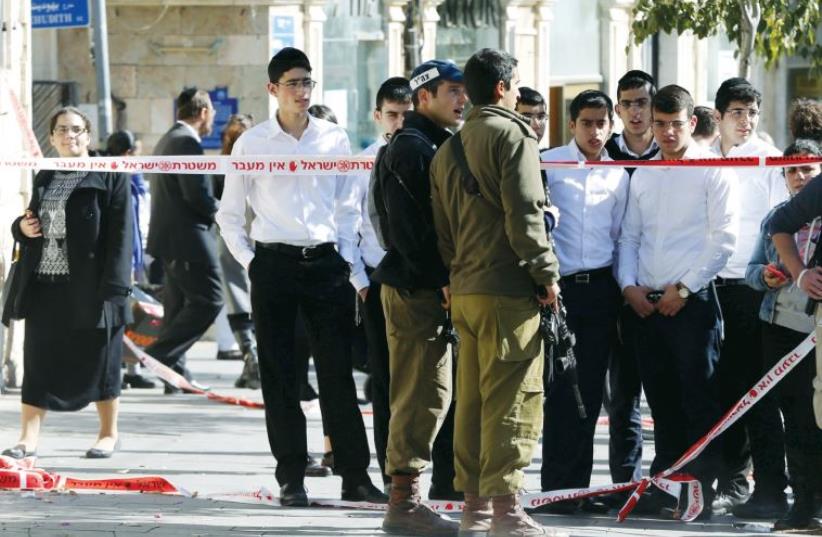 Israeli soldiers secure the area after a stabbing attack by two Palestinian teenage girls took place in central Jerusalem on November 23
(photo credit: REUTERS)
Advertisement
On December 18, 2015, Palestinian Authority President Mahmoud Abbas defended the latest wave of bombings and stabbings of Jews by Palestinians as a “justified popular uprising.” Jurisprudentially, at least, he was mistaken. In law, in all law, such evident expressions of pure criminality can never be reconciled with any form of permissible “uprising.” There is no cause that can ever warrant the intentional mutilation or murder of civilians.This remains the case, moreover, even if the cause involved is allegedly just.Still, many observers are oblivious to both facts and law. Even now, supporters of Palestinian violence against Israeli noncombatants ritualistically claim that the Arab force is somehow being directed solely against an “occupation,” and thus warrants “any means necessary.” In discernible law, however, this claim is conspicuously baseless and incorrect. Even where the use of violence may be justified – and this is arguably not the case with Palestinian terrorism, where Israel left Gaza more than 10 years ago and has tried for much longer to negotiate a plausibly secure settlement for the West Bank (Judea and Samaria) – any deliberate attacks upon noncombatants are always illegal.“One man’s terrorist is another man’s freedom fighter” – although repeated again and again, this appealing mantra has no authentic grounding in law.On the contrary, there already exist very explicit, precise and settled legal criteria to distinguish terrorists from freedom fighters. Furthermore, according to international law, any politically- motivated insurgent who willfully attacks a civilian with a knife or scissors, or tries to run him or her down with an automobile, is a terrorist.Period.It is true, of course, that certain insurgencies can be judged lawful. Yet, even these insurgencies must first conform to the binding norms of humanitarian international law, or the law of armed conflict. In law, the ends can never justify the means. Wherever an insurgent individual or group chooses to resort to unjust means, his or its actions are prima facie impermissible.How shall we judge precisely when insurgent force is just or unjust? The determinable standards that must be applied here are known in law as just cause and just means. These two standards, and these two standards alone, allow us to differentiate a lawful insurgency from terrorism.Under law, “popular uprising movements” that fail to meet the test of just means are never protected as legitimate.Leaving aside the unsupportable argument that Palestinian organizations may inherently satisfy certain identifiable legal standards of a “popular uprising movement,” it is still clear that they routinely fail to meet the authoritative just means standards of discrimination (sometimes also called “distinction”), proportionality and military necessity.These critical formal criteria, long applicable under the Laws of War, have been expressly applied to all insurgent organizations by the common Article 3 of the four Geneva Conventions of 1949 and also by the two Protocols to these Conventions of 1977.They are now directly binding upon all combatants by virtue of both customary and conventional international law, and – according to Article 38 of the Statute of the International Court of Justice – by “the general principles of law recognized by civilized nations.”Under law, at least, it is all rather simple: The ends can never justify the means. As in the case of war between states, every use of force by insurgents must be judged twice, once with regard to the justness of the objective (the avowed Hamas/PA objective is a Palestinian state, to be built upon the antecedent ruins of Israel; in other words, a manifestly “one state solution”), and once with regard to the justness of the adopted means. It follows that any Palestinian person or organization that deliberately targets Israeli civilians with the express intent to maximize pain and suffering can never claim to be a “freedom fighter.”Significantly, as a non-legal aside, it also turns out that several recent Palestinian attacks have unwittingly wounded or killed other Arabs, Palestinians who had been mistakenly identified by the terrorists as Jews.Always, terrorist crimes, as part of a far broader category of harms called crimen contra omnes (crimes against all), mandate universal cooperation in apprehension and punishment. As punishers of “grave breaches” under international law, all states are expected to search out and prosecute, or extradite, individual terrorist perpetrators. In no circumstances are states permitted to benignly characterize terrorists as being part of some “justified popular uprising.”This prohibition is especially pertinent for the United States, which incorporates all treaty law as the “supreme law of the land” at Article 6 of the Constitution, and which was explicitly formed by the Founding Fathers according to the timeless and universal principles of Natural Law. Further incorporations of international law into US law can be found at such Supreme Court decisions as the Paquete Habana (1900), and Tel-Oren vs. Libyan Arab Republic (1984).Palestinian terrorists are not “freedom fighters.” They are not engaged in any “justified popular uprising.” They are, instead, “common enemies of mankind,” major criminals who exceed all moral and legal authority by their persistently cruel and random attacks.History adds a useful dimension. Until July 7, 2005, British newspapers had always referred to Palestinian murderers as “militants,” but when the al-Qaida allies of Islamic Jihad and Hamas launched suicide attacks in London in that year, the media in Great Britain abruptly changed its vocabulary. Once the victims were Londoners, it seemed, the perpetrators quickly became “terrorists.”Similar linguistic transformations may be detected in France, especially after the more recent Paris attacks.Although obvious enough to anyone familiar with relevant law, many international observers of Palestinian terrorism in Israel still find it convenient or reassuring to conflate terrorist attackers with freedom fighters. Nonetheless, however these observers may choose to craft their particular arguments, truth is ultimately exculpatory, at least under law. In essence, this means that there can remain no defensible legal position for the intentional murdering or wounding of Israeli civilians, or of any other civilians for that matter.Never can such violence be correctly excused as an example of “justified popular uprising.”

The author (PhD, Princeton, 1971) is emeritus professor of International Law at Purdue University. His tenth book, Surviving amid Chaos: Israel’s Nuclear Strategy, will be published later this year by Rowman and Littlefield.
Advertisement
Subscribe for our daily newsletter