As long as Israel has no constitution that clearly protects individual basic rights, it is important that Israel maintain a strong, outspoken judiciary. 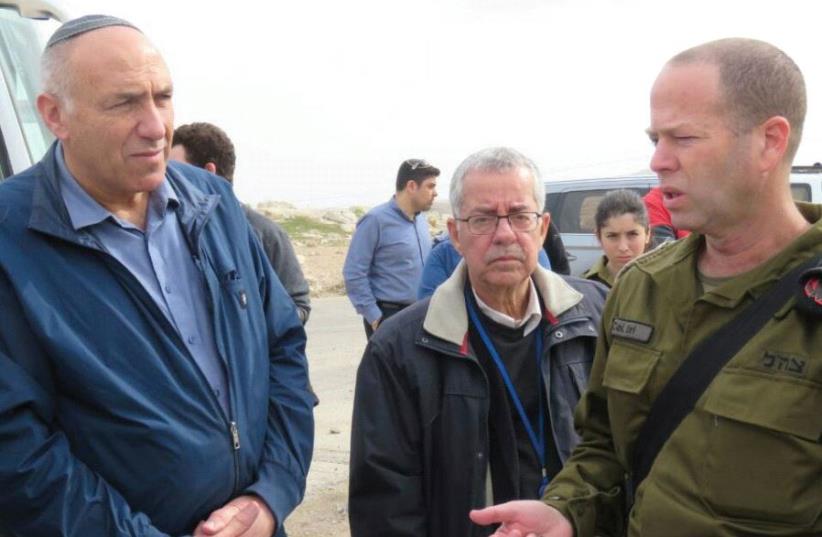 MK MOTI YOGEV listens to a colonel during a tour of Judea and Samaria last month.
(photo credit: Courtesy)
Advertisement
MK Moti Yogev was justifiably upset Sunday, just two days after a Palestinian terrorist in Mevo Dotan rammed a car into a group of soldiers, killing Capt. Ziv Daus, 21, and Sgt. Netanel Kahalani, 20.Perhaps Yogev’s aggravated emotional state explains his extended diatribe against the Supreme Court during an interview with Radio Darom.Yogev claimed that by weakening Israel’s deterrence against terrorists, like the one who murdered Daus and Kahalani, Israel’s highest court had become an accomplice to terrorism. He claimed that Supreme Court justices lived in an alternative universe, detached from reality – “la la land.” And he referred to them as a “pillar of butchery” rather than a “pillar of democracy,” a play on words in Hebrew that implied the court was encouraging murder by restraining the IDF and its soldiers from doing everything in their power to fight terrorism.It was an impassioned but very misguided speech. For as retired Supreme Court justice Elyakim Rubinstein noted, “In the majority of cases involving [punitive] house demolitions, the courts do not interfere with IDF orders.” In fact, according to a 2002 Supreme Court ruling during the Second Intifada, a house demolition can even be carried out without allowing recourse to appeal, if such a delay would “endanger the lives of Israelis.” Ammesty International criticized the court at the time, saying the decision was “a virtual green light” to demolish without warning.Even if the court did, as Yogev claimed, prevent the IDF from demolishing homes “within 48 to 72 hours” – contrary to what he would like to see happen – it is not at all clear that house demolitions deter terrorist attacks, particularly when the perpetrator is fully prepared to die. One study by Efraim Benmelech of Northwestern University, and Claude Berrebi and Esteban F. Klor of Hebrew University of Jerusalem, titled “Counter Suicide Terrorism: Evidence from House Demolitions” that was published in 2015 in The Journal of Politics, found that there were shortterm effects after the demolition – for about a month.In contrast, an internal IDF report from 2005 that analyzed the effectiveness of the policy during the Second Intifada – during which 3,000 civilian homes were demolished without the Supreme Court stopping those demolitions – found that terrorist attacks actually increased as a result of the policy. Hatred for Israel was stimulated, the damage outweighed benefits, and it was recommended that the practice be stopped.Not only were Yogev’s claims made against the Supreme Court wrong (the court usually does not prevent house demolitions), but even if they were right, he would still be off base by claiming that by preventing demolitions, the court was encouraging more terrorism. Perhaps the opposite is true.But Yogev did not let the facts get in the way of his argument. Indeed, it is fashionable on the Right to attack the Supreme Court. Lashing out at the justices and their “leftwing agenda” has become increasingly common – and politically expedient.In a number of recent high-profile cases, Supreme Court justices have rankled right-wing politicians and their constituents. The court has repeatedly disqualified or delayed legislation – which sought long-term detention or expulsions for foreigners from Eritrea or Sudan who infiltrated into Israel illegally – because it was seen by its justices as a violation of the foreigners’ basic human rights. Similarly, the court has intervened in issues seen as security-related, such as a government decisions whether or not Israel should return the bodies of Palestinian terrorists.While a majority of Israelis (58%) still believe the Supreme Court should retain the power to annul laws passed by the Knesset, according to the Israel Democracy Institute’s annual public opinion survey, more than half of right-wing Israelis (53%) believe it should not. So it is a very popular among Yogev’s constituency to attack the Supreme Court for its purportedly excessive liberalism.We would argue, however, that as long as Israel has no constitution that clearly protects individual basic rights, it is important that Israel maintain a strong, outspoken judiciary. Democracy is not just the rule of the majority. That can lead to the tyranny of the majority. A robust democracy must also have an independent judiciary that rules – not in accordance with political trends, but with democratic principles – including the principle that men like Yogev have the right to speak their mind, even if what they say is not true.