Tel Aviv University researchers have discovered that a chemical commonly contained in sunscreens and other cosmetics may be very bad for the environment. 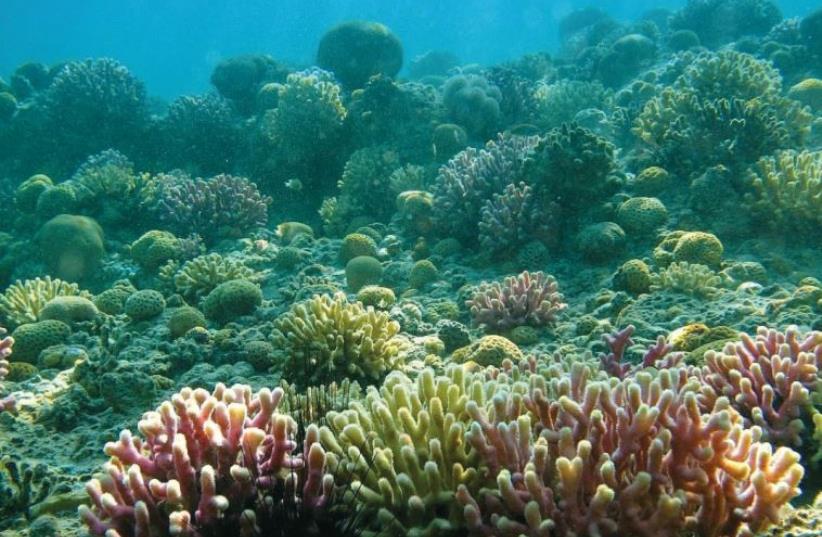 Eilat's Coral Beach Nature Reserve has stunning reefs and an abundance of marine and fish life.
(photo credit: NATIONAL NATURE AND PARKS AUTHORITY)
Using sunscreen with a sun-protection factor of 15 or more is one of the best ways to avoid accumulated sunburn and the risk of melanoma and other skin cancers. However, Tel Aviv University researchers have discovered that a chemical commonly contained in sunscreens and other cosmetics may be very bad for the environment.Published recently in the journal Archives of Environmental Contamination and Toxicology, the article said that even in minuscule amounts, oxybenzone (benzophenone-3) poses an existential threat to corals and coral reefs. Found in more than 3,500 different sunscreen products worldwide, it pollutes coral reefs via swimmers who wear sunscreen or wastewater discharges from municipal sewage outfalls and coastal septic systems,” said Dr. Omri Bronstein of TAU’s zoology department, who was among the principal researchers.The study was conducted by a team of marine scientists from TAU, including Prof.Yossi Loya, also of the TAU department, Ben-Gurion University of the Negev, the Haereticus Environmental Laboratory in Virginia, the US National Aquarium, the US National Oceanic and Atmospheric Administration and other US labs.A person spending the day at the beach might use between 50 to 100 grams of sunblock if reapplied every two hours after swimming, toweling off or sweating a significant amount. Multiply this by the number of swimmers in the water and a serious risk to the environment emerges.“Oxybenzone pollution predominantly occurs in swimming areas, but it also occurs on reefs five to eight to 32 km. from the coastline as a result of submarine freshwater seeps that can be contaminated with sewage,” said Bronstein, who conducted exposure experiments on coral embryos at the Interuniversity Institute for Marine Sciences in Eilat together with Dr. Craig Downs of the Heretics Environmental Laboratories. “The chemical is highly toxic to juvenile corals.We found four major forms of toxicity associated with exposure of baby corals to this chemical.”Forms of toxicity include coral bleaching, a phenomenon associated with high sea-surface temperature events like El Niño and with global mass mortalities of coral reefs.The researchers found oxybenzone made the corals more susceptible to this bleaching at lower temperatures, making them less resilient to climate change. They also found that oxybenzone damaged the DNA of the corals, neutering their ability to reproduce and setting off a widespread decline in coral populations.The study also pointed to oxybenzone as an “endocrine disruptor,” causing young coral to encase itself in its own skeleton, causing death. Lastly, the researchers saw evidence of gross deformities caused by oxybenzone – coral mouths that expand to five times their healthy, normal size.“We found the lowest concentration to see a toxicity effect was 62 parts per trillion – equivalent to a drop of water in six-and-ahalf Olympic-sized swimming pools,” said Bronstein. The researchers found concentrations of oxybenzone in the US Virgin Islands to be 23 times higher than the minimum considered toxic to corals.“Current concentrations of oxybenzone in these coral reef areas pose a significant ecological threat,” warned Bronstein. “Although the use of sunscreen is recognized as important for protection from the harmful effects of sunlight, there are alternatives, including other chemical sunscreens, as well as wearing sun clothing on the beach and in the water.”The researchers hope their study will draw awareness of the dangers posed by sunscreen to the marine environment and promote the alternative use of sun-protective swimwear.