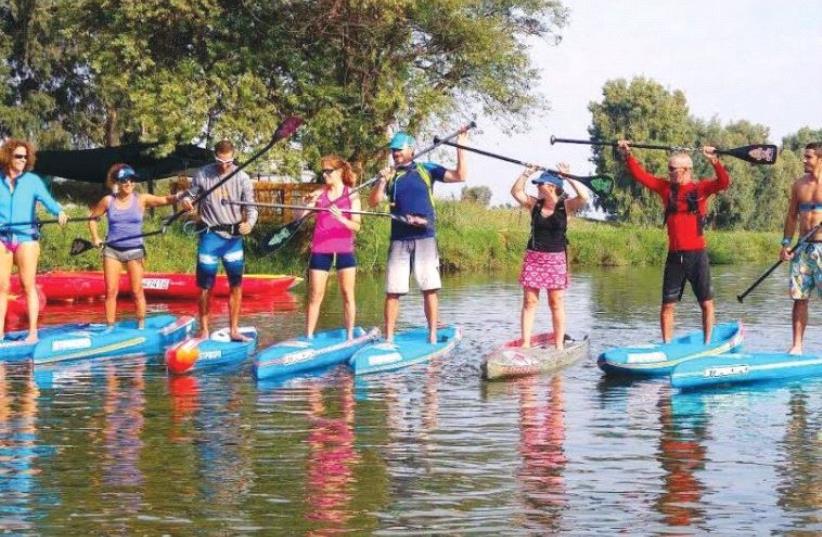 paddleboard
(photo credit: INDIE PARK)
NORTH Israel’s sole Olympic gold medalist, windsurfer Gal Fridman, is set to host a stand-up paddleboard trip on the Jordan River on September 16. The rowing excursion, open to the public of all ages, will set off from Indie Park, located on the river’s banks near moshav Yesud Hama’ala in the eastern Hula Valley region.Fridman, who won a gold medal in the Athens 2004 Summer Olympics and took home a bronze medal from Atlanta 1996 Summer Olympics, has been linked to the site since its inauguration.
Read More...
Participants will be divided into groups according to their level of experience.The event will run from 8 a.m. to 1 p.m. and preregistration is required. For more details and registration, visit: www.indipark.co.il.
Technion holds conference on architecture, medicine While architecture may not be intrinsically synonymous with medicine, the Technion-Israel Institute of Technology held a conference on Tuesday on the juxtaposition of the two fields.Speakers from six countries – Israel, the Netherlands, Germany, Norway, the US and Britain – presented at the fourth international “Architecture and Medicine in the 21st Century” symposium, which explored the subject of digital medicine and its influence on architecture.Backed by a grant from the EU’s European Research Council, the forum provided a merging place for experts from fields such as industrial design, health systems management, hi-tech, academia and, of course, architecture.Among the topics discussed were smart environments, health-promoting environments, hospital smartphones, elderly-assisting robots, remote rehabilitation technology and a cancer treatment center to be established in Afula.
CENTER India comes to Israel in TA culture festThe rich flavors and colors of India can be experienced in the White City at a festival (September 7-10) celebrating the culture of the South Asian nation.The first “India Festival in the City” provides an array of events for the whole family, including yoga classes, Indian dance workshops, Indian music performance, art exhibitions, solar rickshaw rides and Bollywood-related shows and activities.Other activities include a henna decorating workshop, discussions on visiting India, an exhibit featuring photographs of India and arts and crafts workshops where participants can make ritual mandalas and textile macramés.The festival’s organizers say the event is a salute to the rich culture of India, which is engraved in the hearts of the thousands of Israeli tourists and backpackers the country attracts every year.While entrance to the festival is free, select activities require a fee. Entrance on Friday and Saturday is from 11 a.m. to 5 p.m.
Tetris takes over Tel Aviv City Hall Ahead of the highly anticipated DLD Innovation Festival at the end of September, the Tel Aviv-Jaffa Municipality has launched a technology-inspired gimmick to mark the upcoming event and to celebrate the beginning of the school year. Starting on August 30 and running every Thursday night, the city is hosting a tournament of the tile-matching puzzle video game Tetris projected onto the front of the municipality’s building.As part of the initiative, the municipality has invited residents and visitors to play against each other on two giant joysticks, measuring 1.5-by-1.5 meters, at Rabin Square in front of a huge 3,000- sq.m. screen illuminated on the municipality building.Other early-generation digital games such as Snake and Pong are also available to the public.The DLD festival will take place September 25-29 at the city’s Hatachana complex.
SOUTH Beersheba pays tribute to volunteersNext week, Beersheba will launch its annual Volunteer Week to honor those who take part in local social action endeavors.The Beersheba Municipality, together with the Re’em association of volunteer organization heads; Kivunim, the municipal company for recreation and culture in Beersheba; and other community-based organizations initiated the commemorative week to express thanks to those who contributed their time and energy for others in the city.Several events are scheduled throughout the week to recognize volunteers and raise public awareness of the importance of volunteerism and giving back to the community.Events will include a tribute to IDF volunteers on Sunday and a gala at the Beersheba Performing Arts Center dedicated to its volunteers on Monday at 7:30 p.m. On Tuesday, an academic conference titled “Volunteering in the World of Tomorrow” will be held at Ben-Gurion University of the Negev’s Joya Claire Zunenfeld Auditorium, beginning at 8:30 a.m.The week will end with a special tribute to the “Ra’am 7” (Thunder 7) urban rescue unit that responds with search and rescue services during emergencies.
Cancel Subscription