Danny Danon says he wanted group "to have knowledge, be objective, and judge for themselves." 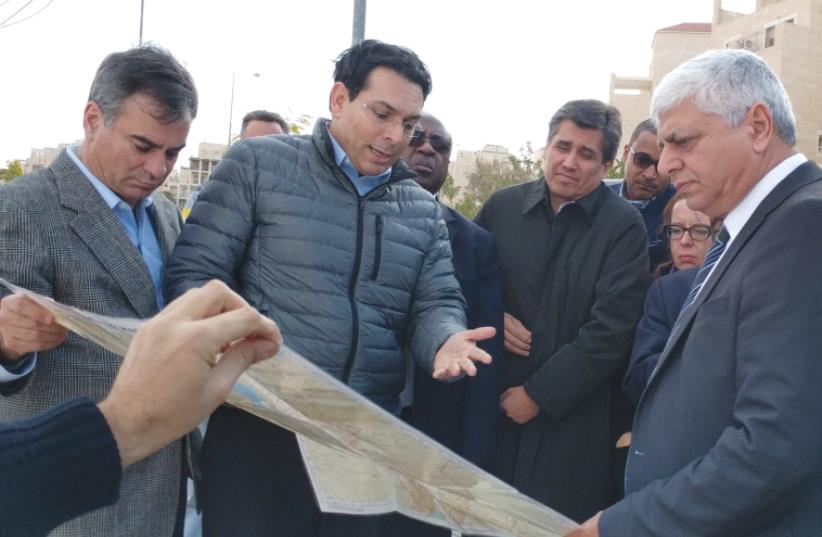 AMBASSADOR TO THE UN Danny Danon (second left), Guatemalan Ambassador to the UN Jorge Skinner-Klee and Ma’aleh Adumim Mayor Benny Kashriel discuss a map in Ma’aleh Adumim last week
(photo credit: Courtesy)
Fourteen UN ambassadors from four continents visited the Israeli settlement of Ma’aleh Adumim east of Jerusalem last week. The delegation was escorted by Israel’s Ambassador to the UN, Danny Danon, as part of a four-and-a-half-day tour of Israel, which was organized by AJC Project Interchange in an effort to promote Israel’s position and relationships at the United Nations.In an interview with The Jerusalem Post, Danon said the delegation was an effort to educate the ambassadors regarding Israel’s positions. “I hope that they will have the knowledge and will be objective and will be able to judge for themselves,” Danon said.The visit to Ma’aleh Adumim, according to Danon, was organized in order to change the perception of Israeli settlements, which are often condemned in the UN as illegal and as an obstacle to peace.“When you speak about the settlements it sounds like illegal outposts, and they saw a city that was built on the hill.Nobody claimed that it was taken from him. It is a city of 40,000 Jewish residents, it speaks for itself,” Danon contended.The international community considers Ma’aleh Adumim illegal under international law, while the Israeli government disputes terming settlements as illegal. The left-wing Peace Now organization has called Ma’aleh Adumim and the adjacent E1 zone, an area that covers 12 sq. km. of the West Bank, “one of the most sensitive areas in terms of the chances for a two-state solution.”Some ambassadors offered critical questions to the mayor of Ma’aleh Adumim, Benny Kashriel, Danon said. “Someone asked if Palestinians can’t live there – and the mayor answered all their questions; it was a fruitful dialogue.”Danon added that the Palestinians’ “culture of hate” is the reason why they don’t live in the Jewish city, and why Jews don’t live in Palestinian cities.Courtenay Rattray, the UN ambassador from Jamaica, told the Post he has an affinity for Israel, as he lived in the country as a child and experienced the 1967 Six-Day War firsthand.Nevertheless, he disagrees with the country on certain policies.“I am not shy in expressing that I am very disturbed by the settlement activity,” Rattray said. “I don’t think that is the right environment by which to have anything that is constructive.”Rattray said his country disagrees with Israel on a number of issues, but that Jamaica is open to working with Israel.There are Israel-sponsored resolutions that deal with agriculture and entrepreneurship which many developing countries won’t support because the sponsor is Israel, Rattray said.“Jamaica adopts a more balanced position. We vote in favor of those resolutions based on their substance, and regardless of whatever pressure we may be subjected to as to why we are supporting Israel.”While much of the ambassadors’ work deals with alleviating world poverty and questions of war and peace, they appeared content to take a break during a visit last Wednesday to the Volcani Agricultural Research Organization south of Tel Aviv, where they sipped lemonade and sampled oranges.The group did include some countries that consistently side with Israel in the United Nations, including the island nation of Micronesia, but Danon said that the delegation is reaching countries that have no affinity for Israel.“It is not a delegation of people that support Israel. We will not have our enemies come, you will not see Syria or Venezuela, who attack Israel every day. But most of the countries, I would not put them as having a position against us or not,” he said.Among the 14 ambassadors were representatives from Albania, Argentina, Botswana, Bulgaria, Burundi,the Republic of Cameroon, Costa Rica, Georgia, Guatemala, Jamaica, Mexico, the Federated States of Micronesia, Sierra Leone and Uganda.Rattray said that the tour is a positive step toward improving Israel’s image, but that significantly improvement in Israel’s stature in the UN would require positive progress regarding the Israeli-Palestinian conflict.“It is a difficult nut to crack,” he said. “You know for something real to happen, in terms of moving the needle, you’re going to need to have something more tangible to get any sort of level of progress.”