The group says the two were killed "while carrying out a jihadist mission."

By ANNA AHRONHEIM
DECEMBER 12, 2017 14:02
Smoke rises from Gaza following reports of an attack, December 12, 2017
(photo credit: ANNA AHRONHEIM)
The IDF denies carrying out a strike in northern Gaza on Tuesday that killed two members of Islamic Jihad in Beit Lahiya.According to the Palestinian Maan News agency, sources close to Islamic Jihad said that the men – Hussein Ghazi Hussein Nasrallah, 25, and Mustafa Sultan, 29 – were members of the group’s armed wing, Saraya al-Quds, and had been working for its Northern Brigade’s engineering unit.The terrorist group later posted a statement on its website saying that the two men were on a “jihadist mission,” and did not blame their deaths on Israel.Earlier Palestinian reports said that the two men were killed in a targeted strike by an Israeli drone. The army quickly released a statement denying any part in the incident.Tensions along the border with the Gaza Strip have been high as of late, with several rockets fired toward Israeli territory over the past week and the IDF retaliating against Hamas targets in the Strip with air strikes and artillery fire.Several large scale clashes between security forces and Palestinians in the wake of US President Donald Trump’s decision to recognize Jerusalem as the capital of Israel have also broken out on the Gaza border, with two Palestinians killed by Israeli fire.In late October the IDF destroyed an Islamic Jihad cross-border attack tunnel, killing 12 terrorists including two senior Islamic Jihad commanders and two Hamas members. Islamic Jihad threatened to retaliate against Israel for the deaths of its members, leading the IDF to deploy Iron Dome missile defense batteries in central Israel. 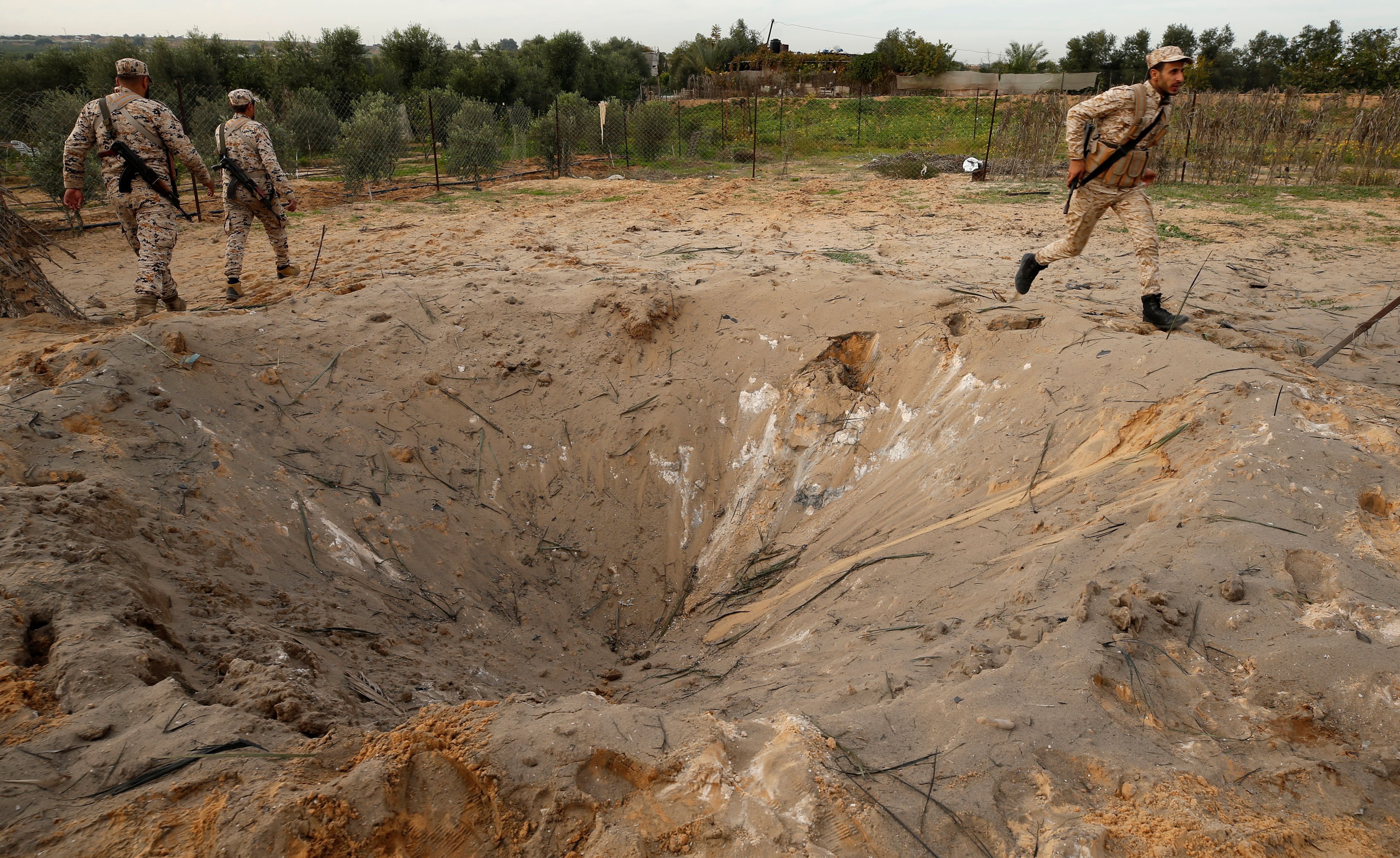 Members of Palestinian Hamas security forces survey the scene of an explosion in the northern Gaza StripTwo weeks ago, Islamic Jihad fired 12 projectiles aimed at an IDF post and a cement factory on the northeastern edge of the Gaza Strip, where construction crews are working on Israel’s new underground barrier outside the Strip.The army announced on Sunday that it had destroyed a large Hamas tunnel that had infiltrated Israeli territory from Khan Yunis in the southern Gaza Strip. IDF Spokesman Brig.-Gen. Ronen Manelis said that “locating two terrorist tunnels in recent weeks is an operational success based on advanced technology, attesting to a rise in the level of the tools developed and used by the IDF,” and stressing that “the tunnel project in the Gaza Strip has suffered a heavy blow.”Gadi Yarkoni, the head of the Eshkol Regional Council, said that it is in “constant and close contact” with relevant military officials who informed it about the tunnel.“There is no change in the guidelines [for residents],” he said, adding that “Eshkol residents are experienced in facing these challenges and are a model of resilience for Israeli society.”Adam Rasgon contributed to this report.