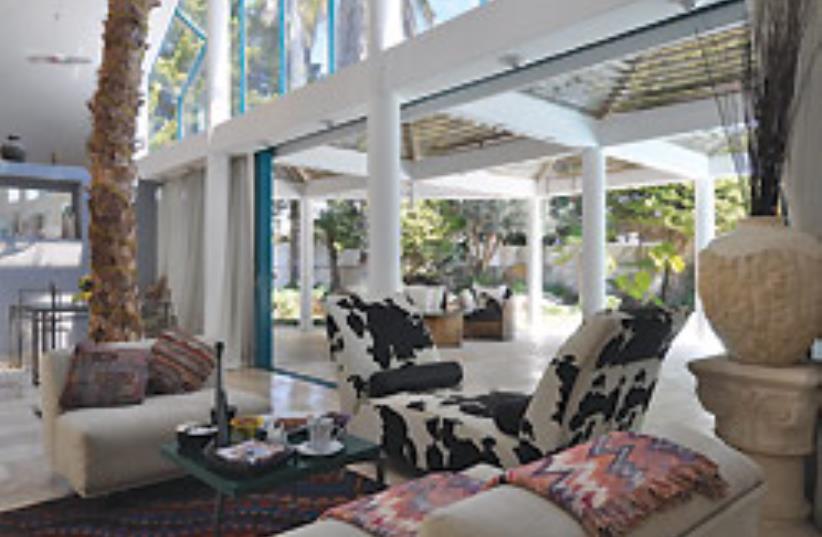 If Frida and Eli Mandel want to move out of their home in Caesarea, it certainly isn't because of the neighbors. With the prime minister's home up the road and Arkadi Gaydamak's pied-a-terre around the corner, it's probably one of the most prestigious addresses in the country.

"It's become too big for us," Eli explains. "When we first bought it 15 years ago we needed rooms for Frida's children, a place for the nanny and the help. But now it's just the two of us and although we love it, we want something smaller."

In 1994 the couple decided to leave their home in Germany and settle here. Frida is Israeli-born and still has family in Haifa. Eli was born in Germany, the son of Holocaust survivors, and always wanted to come. When his real-estate business allowed it, he and Frida decided the time had come and they just had to pick the location of their dream home.

"We looked around Tel Aviv, where all the action is, and Herzliya Pituah, which we considered, but when we came to look at Caesarea, we were enchanted. I remember coming here as a little girl and there was nothing but sand dunes," Frida says.

The house had been built several years before by a couple now divorcing and moving on. Basically, they completely redid the interior to get it how they liked. Frida acknowledges that although she is a jewelry designer, when it came to interior design she left all the decisions to Eli. "He has wonderful taste," she says.

The unusual zigzag design of the house plus the floor-to-ceiling windows, which meant only an almost imperceptible line distinguished between the inside and the outside, was what attracted them to the house in the first place. But to put their own stamp on the unusual design they added color and a wealth of detail, creating corners which have no other purpose than to delight the eye - and showcase some fine artwork.

WHEN YOU walk into this home, you don't know where to look first. The indoor garden, the palm trees almost pushing through the ceiling, the glass-and-iron room divider with inch-thick glass supports stuffed with seashells and a gorgeous Lalique fish sculpture, the newspaper stand holding design magazines next to it on the right opposite the wall of family pictures and the glimpse through the pagoda-like patio of the pool outside, glimmering blue in the sun. But inevitably one is drawn into the sitting room and the mural on the far wall which dominates it.

Based on the "dates" paintings of Japanese conceptual artist On Kawara, which consist of a simple date in white lettering on a colored background, these are the Mandel family version, done by Frida, commemorating family birthdays and other significant dates. According to the Wikipedia entry for On Kawara, if he could not complete the painting on the day he began it, he destroyed it. But Frida felt no such compulsion and took her time over each one, choosing colors which would blend with the mustard walls.

"This color is quite tame," Eli says. "Before the mustard we had bright orange or lemon, and we change it every few years."

They are both great admirers of the Missoni textile company, and all the contrasting colored cushions and the carpet are based on Missoni designs. In fact the central cushion on the off-white sofa is made from a Missoni sweater and intended to pick up the colors in the rug. Two tan leather and metal square armchairs complete the lounge, which is also a repository for numerous outsize stone pots and a Le Corbusier tan chaise longue.

THE SECOND sitting area with a free-standing pewter fireplace dividing it from the main lounge is furnished with a striking cowhide Desede sofa from Switzerland and two beige two-seaters facing each other and brightened up with more Missoni prints. Touches of turquoise are everywhere - on the woodwork outside, on the banisters and door frames. In the space which might one day be used for an elevator, they have created an indoor cactus garden with bright mustard walls and verdigris-covered pots, with a sunburst plaque, frogs and crickets and plant pots climbing the walls.

Yet another eye-catching corner is the one which displays a sculpture done by their neighbor Leon Bronstein, called "Come and Be My Love." In stark contrast to the warm multicolored fabrics in the rest of the room, the figure stands on a black plinth framed by a thin angled lamp on one side and a tall cactus draped with perspex rectangular lights to help the plant grow on the other.

The kitchen is a riot of color, although Frida, who loves to cook, is not allowed to spend as much time there as she would like.

"I hate to see a woman standing in the kitchen cooking," says Eli, half tongue-in-cheek.

So although streamlined and convenient, the kitchen is small and most notable for the colorful Alessi accessories on the counters with more displayed on the transparent matching tables and chairs at the entrance to the kitchen.

Upstairs and visible from the ground level are four bedrooms, all aligned, but no corridors or walls to obscure the surrounding view. One of the rooms serves as an office for Eli.

The house is set in a plot of 1,300 square meters and the lush garden is filled with fruit trees, palms that were not born yesterday and blossoms that perfume the air lending an air of paradise to the whole enterprise. The view of the sea not far away completes the idyllic picture.