The discovery was the result of a new methodology that could hopefully help find other, hidden black holes in nearby galaxies, or even in the Milky Way itself.

By AARON REICH
A supermassive black hole with millions to billions times the mass of our sun is seen in an undated NASA artist's concept illustration.
(photo credit: REUTERS/NASA/JPL-CALTECH/HANDOUT)
Advertisement

A new black hole 11 times the mass of the Sun has recently been discovered in a nearby galaxy.

The black hole was found hidden in NGC 1850, a large cluster of thousands of stars located around 160,000 light-years away from Earth in the nearby galaxy known as the Large Magellanic Cloud.

The discovery was the result of a new methodology that could hopefully help find other, hidden black holes in nearby galaxies, or even in the Milky Way itself.

The discovery was made via the European Southern Observatory's Very Large Telescope (ESO'S VLT) and a methodology the lead scientist behind the discovery described as being like that of a detective.

“Similar to Sherlock Holmes tracking down a criminal gang from their missteps, we are looking at every single star in this cluster with a magnifying glass in one hand trying to find some evidence for the presence of black holes but without seeing them directly,” Sara Saracino from the Astrophysics Research Institute of Liverpool John Moores University in the UK, who led the research now accepted for publication in Monthly Notices of the Royal Astronomical Society, said in a statement. “The result shown here represents just one of the wanted criminals, but when you have found one, you are well on your way to discovering many others, in different clusters.”

The researchers used two years' worth of data gathered with the Multi Unit Spectroscopic Explorer (MUSE) that was mounted at ESO's VLT in the Atacama Desert in Chile. MUSE was chosen because it can observe very crowded areas, and it allowed them to further investigate the clues leading to the black hole.

The researchers were first tipped off to its existence after noticing the influence its gravity had on the five-solar-mass star in its orbit.

Artist impression of a supermassive black hole at the center of a galaxy. (credit: Wikimedia Commons)

But the majority of black holes can't usually be spotted that way, and need to be detected dynamically.

“When they form a system with a star, they will affect its motion in a subtle but detectable way, so we can find them with sophisticated instruments,” explained University of Göttingen's Stefan Dreizler, who was part of the study.

Using the MUSE, the researchers found the star influenced by the black hole. Then, data was used from NASA's Hubble Space Telescope and the University of Warsaw's Optical Gravitational Lensing Experiment to measure its mass and find confirmation.

What is also notable about this discovery is that the star cluster it was hiding in is, on a cosmic scale, relatively young, being just 100 million years old. For comparison, sharks have existed on Earth for at least 450 million years, meaning that sharks predate the existence of this star cluster over four times over.

SNORKELERS SWIM with a whale shark, the world’s largest fish, at the Maldives’ South Ari Atoll in 2012 (credit: DAVID LOH/REUTERS)

But while this star system is very young, there ones that are far older, and which could be hiding black holes of their own.

This methodology could hopefully lead to finding them.

Also helping is ESO's Extremely Large Telescope (ELT), which is set to open within the decade and will help find even more of these undiscovered black holes.

“The ELT will definitely revolutionize this field,” Saracino said.

“It will allow us to observe stars considerably fainter in the same field of view, as well as to look for black holes in globular clusters located at much greater distances.” 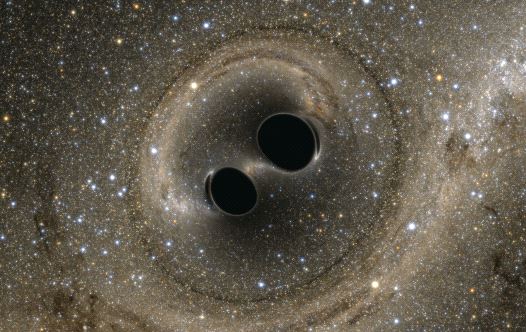 The collision of two black holes, a tremendously powerful event detected for the first time ever by the Laser Interferometer Gravitational-Wave Observatory (LIGO), is seen in this still image from a computer simulation released in February last year (credit: REUTERS)

Black holes in groups have been discovered before. Back in March, astronomers using the Hubble telescope found a massive concentration of black holes in the heart of the dense stellar system known as the NGC 6397 globular cluster.

Black holes are regions in space that act like traps, according to Hebrew University of Jerusalem Prof. Tsvi Piran. You can get in, but nothing can get out – even light, which is why it is called a black hole. It is impossible to see inside it, or even see it directly.

A simulated image of a black hole. (credit: Wikimedia Commons)

Their nature is the subject of great scientific interest, but there is still so much that is unknown about them.

Maayan Jaffe-Hoffman contributed to this report.