US envoy George Mitchell stresses framework will tackle all core issues at heart of conflict, Netanyahu and Abbas agree to hold another meeting on Sept. 14 and 15.

By HILARY LEILA KRIEGER, HERB KEINON
SEPTEMBER 3, 2010 00:28
311_Netanyahu, Clinton cat claw, Abbas and Mitchell
(photo credit: Associated Press)
Advertisement
WASHINGTON – In the first concrete decision to emerge from the direct talks that began here on Thursday, Israelis and Palestinians agreed to work out a framework agreement in the coming months as a first step to a full peace treaty, US Middle East envoy George Mitchell announced on Thursday.The idea, according to sources close to Netanyahu, is to reach agreement in principle on core issues, and then have the respective staffs settle the details.RELATED:
Analysis: 'The blame game has already started'
Analysis: Peace looks like mission impossible
Opinion: Reason for optimism in talksMitchell stressed that the framework deal would not be an “interim agreement” – which the Palestinians have long resisted – but would tackle all of the issues at the heart of the conflict.“The purpose of a framework agreement will be to establish the fundamental compromises necessary to enable them to flesh out and complete a comprehensive treaty that will end the conflict and establish a lasting peace between Israel and the Palestinians,” he told reporters during the first day of direct talks between Israelis and Palestinians in 20 months.The parties also agreed on Thursday to hold another round of talks on September 14 and 15 in the region, possibly at the Egyptian resort of Sharm e-Sheik.The mid-September talks will include Secretary of State Clinton and Mitchell – an indication of America’s central role in the process.

There were also some reports that the US was trying to put together “understandings” related to settlement building. Prime Minister Binyamin Netanyahu has made clear in Washington that he will not extend the 10-month housing-start freeze he instituted in November. Palestinian Authority President Mahmoud Abbas has demanded a freeze in all settlement activity.The decision to begin work on a framework agreement – on the way to resolving all of the core issues within the one-year timeline laid out by the United States – was taken at Thursday’s first session of negotiations.In private meetings, Netanyahu said that what was needed were decisions by the leaders, “not a sea of staff work.”Nevertheless, there will be further meetings between the staffs before the next round of talks.The talks began with public statements by Clinton, Netanyahu and Abbas in the Benjamin Franklin Room at the State Department before the three held a plenary session with their staffs, and then broke into a smaller session consisting of Clinton, Mitchell, Netanyahu and Abbas, with chief negotiators Yitzhak Molcho and Saeb Erekat, in her private office.After that, Netanyahu and Abbas held a one-on-one discussion for two full hours before being rejoined by their staffs.After that meeting, senior officials quoted Netanyahu as saying that there was no substitute for direct meetings between leaders to solve key problems.Mitchell described the relationship between the two men as “cordial,” adding, “I felt it was a very positive and constructive mood, both in terms of the nature of the interaction and in terms of the nature of the conversation that occurred.” 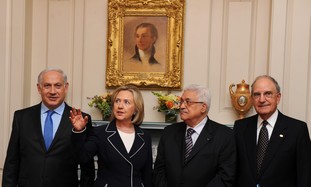 Mitchell declined to go into detail about the topics covered but did say that there was mention of core issues. He didn’t spell out what they were, but they are generally understood to include security, borders, settlements, Jerusalem and refugees.However, Mitchell cautioned that he wasn’t suggesting that “a detailed and extended discussion or debate on these specific substantive issues” occurred during the talks.He did note that another trilateral team had already convened to sort out the details of the next meeting on September 14 and 15.Egyptian President Hosni Mubarak, who visited Washington on Wednesday along with King Abdullah of Jordan to lend support to the nascent process, said that he would be willing to host the parties for another round of talks. This fueled speculation they are likely to be held at Sharm.In addition to more frequent lower-level meetings, Mitchell indicated that Abbas and Netanyahu would meet personally around every two weeks, a schedule first proposed by Netanyahu.
Advertisement
Subscribe for our daily newsletter