By JACOB KANTER
MAY 26, 2010 07:49
Maccabi 311
(photo credit: BSL)
Advertisement
Following a week of speculation over whether Maccabi Tel Aviv had lost its swagger, the BSL defending champions reminded everyone at Nokia Arena Tuesday night why they are once again favorites to take home their league title for the 49th time.Their 104-78 victory over fifth-seeded Barak Netanya was far more lopsided than the score indicates, and it went a long way towards silencing those who doubted their supremacy after a surprisingly tough five-game series against Bnei Hasharon.Maccabi coach Pini Gershon opened the floodgates for his men, who returned to their free-flowing, highly athletic style of basketball. And the results were devastating for coach Arik Alfassi and his squad.The game was marked by Maccabi’s depth and balance, with seven players in double figures (led by Guy Pnini’s 16) and every player entering the scoresheet in both the points and rebounds columns.Netanya’s Tony Washam scored 26 and Danilo Pinnock 20, but their teammates shot only 12-31 from the field.The win earned the yellow-and-blue their 17th-straight trip to the championship game, where they’ll face Gilboa/Galil on Thursday night.The third-seeded squad supplied the crowd with its only taste of drama on Tuesday, downing Hapoel Jerusalem 79-69 in the evening’s early showdown.Gilboa/Galil will be seeking its second BSL championship, having defeated Hapoel Tel Aviv in a best-of-five series in 1993. But Oded Katash’s men will have to play the game of their lives if they want to run with Maccabi on Thursday, given the beat-down suffered in the nightcap. 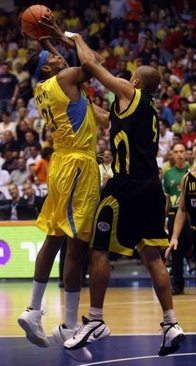 Maccabi Tel Aviv 104,
Barak Netanya 78 Maccabi’s size advantage inside was on display from the get-go, as nearly every offensive possession resulted in multiple chances, and Netanya’s drives to the basket were routinely met by a swarm of long arms.But the home team’s athleticism and perimeter shooting (six threes in the first 10 minutes, 12-of-27 for the game) also contributed to a heavily one-sided first quarter, as a balanced inside-outside game gave Maccabi a 29-14 lead after 10 minutes.The second quarter saw more of the same from Gershon’s men. Whether it was through the drive-and-dish, pick-and-roll, or isolation play, Maccabi dominated Netanya by outshooting, outrebounding and outhustling the visitors en route to a 60-32 halftime lead.Netanya’s shots began to fall in the third, but its defense continued to be rendered ineffective due to Maccabi’s offensive rebounding (47% of their misses ended with the ball back in their hands), and the hosts led 84-51 heading into the fourth.Both teams eased up on defense in the final 10 minutes, and Maccabi’s focus understandably waned, allowing Netanya to win the final period 27-20. But it was a victory that Alfassi will undoubtedly not be satisfied with.Raviv Limonad, Doron Perkins, and Andrew Wisniewski each scored 14, ensuring that Gilboa/Galil will have to focus on a number of threats if it wants to hoist the trophy Thursday night.Gilboa/Galil 79, 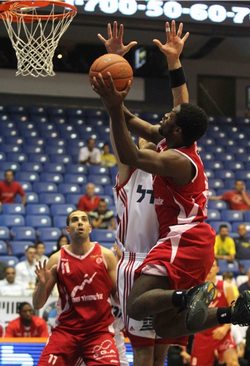 Hapoel Jerusalem 69 The first semifinal featured a guard-heavy Gilboa/Galil squad matched up against the forward-dominated lineup of Hapoel Jerusalem.The two teams split the season series, with each team winning on the road. Given that Hapoel’s fans outshined those of the northerners in both number and volume on Tuesday night, perhaps they should have stayed home.Gilboa/Galil overcame a size disadvantage to hold Guy Goodes’s squad to only 33 percent from the field, and removed normally-reliable Dijon Thompson from the equation: the Jerusalem swingman scored only three points on 1-8 shooting.Jeremy Pargo led the victors with 13 points, and Brian Randle scored seven while grabbing eight rebounds.Tre Simmons did his best to keep the game competitive, scoring 14 and collecting a game-high 11 rebounds. Jerusalem grabbed 18 offensive rebounds to Gilboa/Galil’s four, but could never take advantage of the extra opportunities.The first half was a streaky one, with Gilboa/Galil and Jerusalem unleashing early 10-0 and 8-0 runs, respectively.Hapoel took a 41-35 lead into the locker room, largely thanks to the inside presence of Brandon Hunter and Leo Lyons. The big power forwards combined for 19 points in the first 20 minutes.But Lyons didn’t score in the second half and Hunter scored only six more, though still enough for a game-high 16.Gilboa/Galil’s ball movement underwent a marked improvement after halftime, as Dagan Yivzori and Guni Israeli got enough open looks to combine for 5-8 from beyond the arc. Their teammates were 3-14 collectively.Gilboa/Galil retained the momentum as the fourth quarter began, and it opened up an 8-1 run over the first three minutes for a 66-53 lead.

Jerusalem’s Pooh Jeter (eight points) hit a three to cut thebleeding, but Hapoel relied on the diminutive guard too much down thestretch, telegraphing their passes that led to turnovers and eventualGilboa/Galil layups.Jerusalem continued to fight despite missedopportunities at the line and at the basket, largely thanks to thenortherners’ 54% shooting from the line.Hapoel’s Yuval Naimi(12 points) drained a three-pointer with 40 seconds left cut the leadto 73-69, but opposing point guard Gal Mekel (seven points, fiveassists) hit all four of his free throws after that point.AfterJerusalem’s shots continued to rim out, Mekel stamped the win with asleek behind the back pass to Dion Dowell (11 points), whose thunderousdunk provided the game’s final points.
Advertisement
Subscribe for our daily newsletter