Thousands of fans greet basketball team at Ben-Gurion airport a day after they beat Real Madrid for sixth European championship in club history. 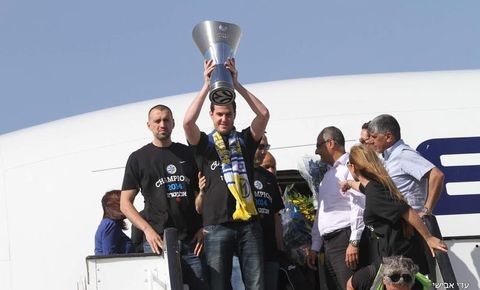 Newly crowned European champions Maccabi Tel Aviv returned home to a hero’s welcome on Monday, with Prime Minister Binyamin Netanyahu taking time out of his busy schedule to meet the players and staff, thousands of fans bringing the arrivals terminal at Ben-Gurion Airport to a standstill and around 30,000 supporters celebrating with the team at Rabin Square.Maccabi claimed its sixth European title – and the first since 2005 – with a stunning overtime victory over Real Madrid in Milan on Sunday night, and received a reception worthy of a champion on its return to Israel.Maccabi exceeded all expectations simply by reaching the Euroleague Final Four, but it advanced to the title game by upsetting CSKA Moscow in Friday’s semifinal before defeating what was considered to be the best team in Europe in a tense final.After landing at Ben-Gurion in the afternoon and exiting the plane in a sight reminiscent of the arrival of Egypt’s president Anwar Sadat in November 1977, Maccabi had to leave the airport through a side exit due to the congestion at the arrivals terminal.The players were supposed to meet with the fans but had to be smuggled into the team bus due to security reasons.The team was then scheduled to pay a visit to Tel Aviv Mayor Ron Huldai, but the yellow-and-blue rearranged its plans after receiving a late invitation to meet Netanyahu at his Tel Aviv office.Maccabi chairman Shimon Mizrahi awarded Netanyahu a ball signed by all the players and staff, and the prime minister congratulated the team for an amazing achievement.“David Blatt and I have something in common, as this is his first Euroleague title as a head coach and it is also my first as a prime minister,” said Netanyahu. “You brought the country a lot of honor. You set an example for fighting spirit, and I was on the edge of my seat. This was an uplifting win for the entire nation.”Blatt, who joined a rare group of coaches to have won the Euroleague title, the biennial EuroBasket championship and an Olympic medal, echoed Netanyahu’s sentiment.

“Part of our role is to represent the people of Israel and bring them honor and joy,” Blatt said. “We try to set an example and lead in the best way possible, just like you do for all of us.”After a hectic 24 hours of celebrations with little sleep, Maccabi players will return to training on Tuesday, with the local Basketball Super League title still to be decided. Maccabi faces Hapoel Eilat in the first game of the playoff semifinals on Thursday.Following its failure to claim the league title last season after a defeat to Maccabi Haifa in the final, the yellow-and-blue has one last goal to achieve to complete a perfect season.
Advertisement
Subscribe for our daily newsletter