Off the Beaten Track: Road to the Gilabon

By JOE YUDIN
gilabon 311
(photo credit: Yoni Cohen)
Advertisement
Joe Yudin owns Touring Israel, a company that specializes in “Lifestyle” tours of Israel.Twenty years ago I was totally clueless as to the rich Jewish history of the remote areas of Israel. Yes I remember the stories about Hebron, Beersheba and Jerusalem from my childhood Hebrew School and synagogue growing up in New Jersey and some of it did manage to seep in. Even some of the Talmudic stories about the great rabbis of Tiberias mentioned in the Haggadah managed to crawl into the back of my brain between the four glasses of wine. But Jews in the Golan Heights? I had always thought the Golan Heights were just a strategic asset seized by Israel during the Six Day War in order to halt once and for all the constant shelling and sniping at the Kibbutzniks farming the Hula Valley below. 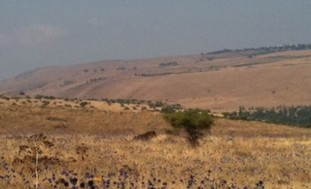 I stay in Rosh Pina while exploring the north eastern Galilee and Golan. There are some great hotels and bed & breakfasts there including Mitzpeh HaYamim, Pina Barosh and Pina BaLev. A drive from this beautiful 19th century Galilean village to the Golan Heights enables one to understand the Golan plateau’s strategic importance. From the hills above Rosh Pina I can see Lake Kinneret, Israel’s most important water source, wedged between the towering Golan Heights and the shorter Galilean Hills. The Syrians once had a foothold on the northern shore of the lake, and as I drive north on Route 90, and look up at the heights and Mt. Hermon I cannot comprehend what was going through the minds of those brave Zionist pioneers who drained the swamps of the Hula Valley while under constant fire from the Syrian army above. It must have been pure madness. But here I am driving through green plains dotted with fields of mango and citrus, as many species of birds fly overhead. I make my way east on Route 91, crossing the valley, and as I begin to descend into the Jordan River Valley, I notice the concrete bunkers that dot the road facing what was once the Soviet-backed Syrian army. 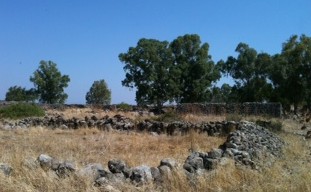 I wind around the bend and pass by the ruins of the crusader fort of Chastellet that once guarded this ancient road by the Jordan River. It was destroyed by Saladin’s Muslim forces in 1179, killing all 1,000 crusaders inside, tossing their bodies into a cistern only to be found some 700 odd years later by archaeologists. Crusading knights were known to have thrown Jews and Muslims into wells throughout Europe while on their way to the Holy Land. I wonder if this was sweet revenge? Stop here and explore the ruins and the banks of the river. This section of the Jordan River was also slated to be a water filtration and pumping station back in the 1950’s but Syrian artillery put an end to that. Israel had to build its water station inside a mountainside hundreds of meters below sea level by Tiberias in order to defend it. This cost the country millions more in order to pump the water up hill to the rest of the country. 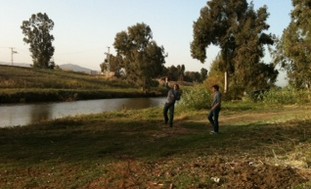 I cross the “mighty” Jordan River which would be considered a creek in most countries outside the Middle East. A couple of inflatable kayaks drift under the bridge and down the river. Looks like fun. You are able to park by the old bridge further down the road and make your way down to the river, but stay on the trails and be wary of minefields clearly marked. On the other side of the bridge I start the climb up the Golan Heights, passing the old Ottoman Empire tax office. Between 1517 and 1917 one had to pay a tax here when crossing between the Ottoman districts of Palestine and Syria. Climbing up Route 91 on the Golan side I can easily spot the destroyed Syrian bunkers, bases and pillboxes scattered about various minefields lying immodestly underneath clumps of eucalyptus trees. Legend has it that Israel spy Eli Cohen reported the fact to his Mossad handlers that under every Golan eucalyptus tree was a Syrian bunker or base and that this information proved invaluable during the Six Day War. Regardless of this legend Eli Cohen did provide Israel with invaluable intelligence before being caught and hanged by the Syrians in 1965.Continuing up the road about a kilometer and a half, I see a lone brown sign pointing to the Gilabon Nature Reserve and turn left onto a red marked gravel road. This is the entrance to a well-known hike by Israeli standards but a little off the beaten track for the tourists. Check back for a description about my adventure there, including a little exploring of the ancient Jewish village of Dabura.Joe Yudin became a licensed tour guide in 1999. He completed his Master’s degree at the University of Haifa in the Land of Israel Studies and is currently studying toward a PhD.