Off the Beaten Track: The original 300

By JOE YUDIN
Valley of Armageddon
(photo credit: DAVID SMITH)
Advertisement
Joe Yudin owns Touring Israel, a company that specializes in “Lifestyle” tours of Israel. Driving up through Wadi Ara at dawn I reach the mouth of the mountain pass between the hills of Samaria and Menache and gasp as I catch a glimpse of the Jezreel Valley, sitting in a mist as the sun rises. I roll my windows down so I can smell the crops and inhale the fresh air that is fast becoming extinct in Israel with all the urban sprawl. The sunflowers are starting to bloom across the valley. In the back of my mind I hear the pioneers of the pre state days clearing stones, draining swamps, plowing fields and singing Hebrew folk songs while making the wilderness bloom. The crop dusters take off from the sleepy, British Mandate era airstrip called “Megiddo Airport” and they begin to spray the fertile fields as the mist dissipates. I see the engineless, white gliders sitting near the runway and remind myself that I must try that one day. Every January and February thousands of Israelis flock to the airstrips forest to see the wondrous multicolor fields of anemones. My stomach turns knowing that there are forces in our government who are doing everything they can to turn this airstrip into “Haifa International Airport”.  If that happens, you can say goodbye to our beautiful Jezreel Valley forever. I approach the modern “city” of Afula, at its center a small tel. I make out the outline of a fortress/tower built by the crusaders out of the remains of sarcophagi. This is probably the ancient city of Ophrah as mentioned in the Book of Judges. This valley is a fertile land bridge, filled with fresh water springs, vast fields of wheat, sunflowers and orchards of olives, pomegranates and figs. Whoever controlled this flat valley in ancient times, controlled water, food, transport and taxes, and ancient Ophrah was its economic center. I head up the Givat haMoreh on a dirt track. I maneuver the jeep through a few mud puddles, boulders and around a family of turtles. On both sides of us there are wild fields of red anemones and yellow mustard and I climb a watchtower built by the British in the 1930’s. The Mountains of Moab, Kibbutz Ein Harod, Mount Gilboa, Samaria , Tel Megiddo, Mt. Carmel and the Galilee surround me all in full view. 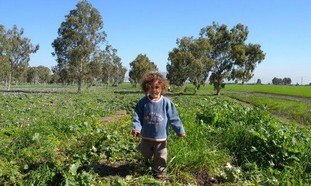 Tens of thousands of potential warriors reported to Gideon at Ein Harod. God told him to send home all those who reveled in their own strength and not the Lord’s, and all those who were scared and did not trust in the Lord, only leaving 10,000 men. Meanwhile the pagan forces were “as numerous as the sand which is upon the seashore.”“Gideon, arose early, and all the people that were with him.  Anyone who has been in the army knows what this means: Time to go for a run. Apparently Gideon’s potential troops started to drop like flies running around the Jezreel Valley. He brought them to the spring at Ein Harod where only 300 of the men held onto their weapons while drinking. He sent everyone else home. Would you want to go into battle with the guy behind you if he puts is weapon down to jump in the pool?To this day the Israeli army weeds out its combat troops by going on long runs and testing their discipline. In my paratroop unit we started day one of basic training on a 6km run, for graduation of basic training we finished with a 90km. Of course when you sleep or go to the shower your weapon is always under your pillow or by your side. Orde Wingate, a British colonel stationed in Palestine during the Arab Revolt of 1936-39 molded a small group of Jewish soldiers called the Special Night Squads after Gideon’s army, based right here at Kibbutz Ein Harod.Basically Gideon was left with 300, God fearing, mentally and physically tough soldiers. 300 men almost a thousand years before the Greek-Persian wars as immortalized at the Battle of Thermopylae. Orde Wingate organized his Hebrew soldiers the same way, three groups of one hundred men. Each received a ram’s horn, a jar and a torch. We know in the ancient world there was a signal man in each military unit. This soldier would be responsible for sending messages to other military units. Here Gideon ingeniously gave each man the tools for the signals. The Israelites  had snuck up to the Midianite camp and  encircled it before giving their signals all at once giving the illusion that they were hundreds of thousands of men not 300. The Midianite troops panicked, fled and were slaughtered as those Israelites who had been sent home came and joined the fight. From this vantage point we can imagine the entire scene. Gideon was a military genius and Wingate knew it.Back in the jeep, next stop Mayan Harod at the base of Mt. Gilboa. This beautiful  national park is the perfect place for a family outing, picnic, swim and of course a visit to the infamous spring where Gideon choose his men. Other nearby sites to visit is the ancient synagogue, Japanese Gardens both at Kibbutz Hefzibah, and the Hankin Museum at Mayan Harod.Joe Yudin became a licensed tour guide in 1999. He completed his Master’s degree at the University of Haifa in the Land of Israel Studies and is currently studying toward a PhD.