Sights and Insights: Nazareth — A hometown with a view

By WAYNE STILES
APRIL 25, 2011 08:18
view of Nazereth 311
(photo credit: Wayne Stiles)
Advertisement
Wayne Stiles is an author who has never recovered from his travels in Israel—and loves to write about them from his desk in Texas.Nazareth offers historical glimpses of its most famous resident as well as remarkable views of battlefields of the Bible. Few went to Nazareth unless they had to go there. The town of Jesus’ childhood sat off the beaten path and high on a ridge overlooking the International Highway. RELATED:
Sites and Insights: Mt. Carmel - gateway to the world
Sites and Insights: Caesarea’s Archeological treasuresThe city’s name likely comes from the Hebrew term netzer, meaning “branch” or “shoot.” Some scholars believe this represents the faith of those Jews who returned from exile. Their hope focused on the coming Messiah, the “righteous Branch” of David promised by the prophet Jeremiah (Jeremiah 23:5; 33:15). Today, the residents of Nazareth represent very distinct people groups. The older part the city includes communities of Christian and Muslim Palestinians. The newer section, called Nazareth Illit (meaning “Upper Nazareth,” as in elevation), serves as the Jewish district. The modern Church of the Annunciation, completed in 1969, replaced the earlier Franciscan church of 1730. The Franciscans had built over the ruins of a 12th-century Crusader church and a 5th-century Byzantine church. The modern structure represents the largest church building in the Middle East and remains the focal point of Nazareth’s tourism. Why so significant? Inside, the Cave of the Annunciation marks the traditional location where the angel Gabriel announced to Mary that she would give birth to the Messiah (Luke 1:26-38). 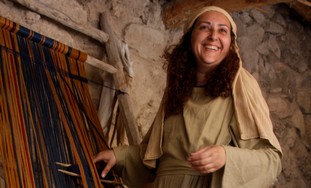 Wayne StilesA new tourist attraction called “Nazareth Village” offers visitors a glimpse into what first-century Nazareth may have looked like. Dressed in period costume, staff members tend their flocks, harvest their wheat, spin their fabric on looms, and tool their wood in the carpenter’s shop (my favorite spot). It’s a great place to take pictures. The replica of Nazareth’s first-century synagogue reveals how the innovative design of the building offered cool temperatures on hot days. When Jesus returned to his hometown of Nazareth, he found a warm welcome at the synagogue—that is, until he preached. The young carpenter claimed to have fulfilled the messianic prophecy he had just read from Isaiah 61:1–2 (Luke 4:16-30). The hearers took offense that the local-yokel Jesus would dare to be remarkable. After all, wasn’t Jesus the guy who built their dining tables? The townspeople were so enraged that they took Jesus to the edge of the Nazareth Ridge and wanted to fling him off into the Jezreel Valley. But he passed through their midst and departed. You think that made for awkward subsequent holiday gatherings?  In their attempts to discredit Jesus, the Pharisees claimed, “no prophet arises out of Galilee” (John 7:52). But the prophet Jonah came from Gath-hepher, located right beside Jesus’ hometown of Nazareth.  The Nazareth Ridge, near what is called Mount Precipice, is always my favorite part of visiting the city. A beautiful overlook has been constructed on the ridge that encircles Nazareth, and it provides a view for many miles in three directions. 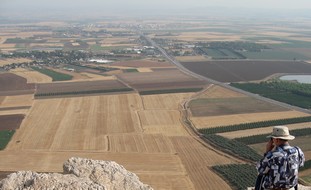 Wayne StilesWith the city behind me, I like to gaze across the vast Jezreel Valley and imagine that Jesus, like any boy growing up in Nazareth, would have known the ins and outs of the hills that surrounded his village. Of course, he would have seen the view from this ridge many times. On the valley floor below, caravans of travelers and the war machines of history have passed. From this one location, many battles have marked the pages of Scripture. To the east, Mount Tabor echoes of the armies of Deborah and Barak as they defeated Sisera. In the distant south, between the Hill of Moreh and Mount Gilboa, Gideon faced off against the Midianites. On Gilboa itself, the tragic life of King Saul came to an end. Squinting southwest through the haze, I try to find the hill of Megiddo in the distance, the site of the future battle of Armageddon in the book of Revelation. As I stand there, I contemplate that Jesus would have thought about all the history that stretched out before him. How to Get There: From Afula in the Jezreel Valley take Route 60 north. From Tiberias take Route 77 west and head south at Route 754. What to Do There: Visit the Church of the Annunciation, take your camera on a walk through “Nazareth Village,” and take your Bible as you stand on the Nazareth Ridge overlook. While there, read the stories that occurred (and will occur) within your view: Deborah and Barak (Judges 4-5), Gideon (Judges 6-8), King Saul (1 Samuel 31), Elisha (2 Kings 4), and Jesus (Luke 4:16-30; 7:11-17; Revelation 16:16). Read Wayne’s blog and subscribe to his weekly Podcast at www.waynestiles.com
Advertisement
Subscribe for our daily newsletter