Sites and Insights: Capernaum with a view

A house with an extensive history still stands and provides a fine example of construction at Chorazin in medieval times.

By WAYNE STILES
NOVEMBER 26, 2012 16:09
Chorazin
(photo credit: BiblePlaces.com)
Advertisement
Wayne Stiles has never recovered from his travels in the Holy Land. Follow him on Twitter (@WayneStiles) or on his blog at www.waynestiles.com.Chunks of basalt emerge from the northern slopes above the Sea of Galilee. Clumps of grass and volcanic rock offer a variegated green and gray to the hillside. From a distance, the basalt ruins of Chorazin appear little more than a pile of rocks among so many thousands of others. Unless you look carefully, you may miss it. Chorazin holds the nickname, “Capernaum with a view.” The site rests about two miles north of Capernaum and the Sea of Galilee. Its view is indeed lovely. Like most Galilean cities, Chorazin had a synagogue. But unlike most excavated ruins today, Chorazin’s synagogue has been found.The remains of the synagogue date to the second century (some suggest it dates to the 4th-century). Galilean synagogues typically had three doorways leading from the outer courtyard into the main area. The open layout had two rows of pillars that formed three walk ways with benches surrounding the walls. Likely destroyed by an earthquake, the synagogue’s ruins betray the compromise of carved images, including patterns of animals, flora, and people. 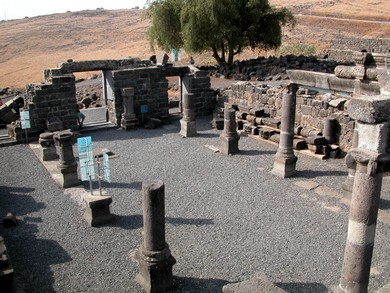 Chorazin's synagogue (BiblePlaces.com)The archaeologist’s spade at Chorazin has unearthed numerous houses near the synagogue and a ritual bath adjoining a sizable oval cistern. In the 1920s, excavators found a decorated stone seat, referred to as, “the Seat of Moses,” which served as the place where an authoritative teacher would sit in the synagogue to read the Torah. The Israel Museum in Jerusalem houses the original seat today, but a replica sits beside the synagogue’s doorway in Chorazin. Jesus referred to this seat of authority when he said: “The teachers of the law and the Pharisees sit in Moses’ seat. So you must obey them and do everything they tell you. But do not do what they do, for they do not practice what they preach” (Matthew 23:2–4). 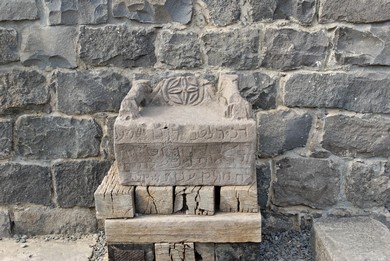 Ancient carvings (BiblePlaces.com)Chorazin was one of the three Galilean cities rebuked by Jesus for refusing to respond to his miracles (Luke 10:13-15). All three cities—Chorazin, Bethsaida, and Capernaum—remain in ruins, with only Capernaum revealing any first-century excavations. Bethsaida’s precise location remains debatable. After Hadrian’s paganizing of Jerusalem in AD 135, Jews flooded into the Galilee. The ruins we see today in Chorazin date from this century in which the city expanded to more than 80 acres. Both Eusebius and Jerome refer to the site in various states of ruin and reconstruction. The fertile volcanic soils surrounding Chorazin yielded an excellent quality of wheat. The Talmud refers to Chorazin’s wheat as worthy of providing the omer, or first fruits offering, but the city’s distance from Jerusalem proved prohibitive (see Menahot, 85a). 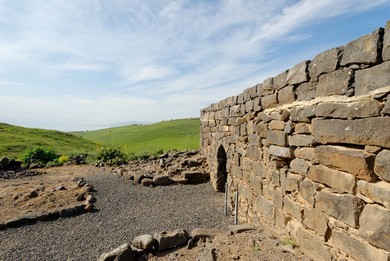 Chorazin ruins (BiblePlaces.com)Most Jewish settlements in the Galilee suffered greatly following the Arab conquest. But during the Middle Ages (12th- to 14th- centuries), Chorazin enjoyed a revival of reoccupation. A house with impressive arches from this period still stands and provides a fine example of the construction in the medieval period. Chorazin remains an excellent example of a Galilean city during the Roman period.

Wayne Stiles has never recovered from his travels in the Holy Land. Follow him on Twitter (@WayneStiles) or on his blog at www.waynestiles.com.Follow @JPost_Lifestyle
Advertisement
Subscribe for our daily newsletter