By WILL BLESCH
The Great Escape: Credit where credit’s Druse
(photo credit: Albert Adut)
Advertisement
This past weekend my girlfriend and I decided we wanted to experience something romantic. Something that was slightly off the beaten path. We also wanted it to be something with an exquisite view, and that offered something outside of our cultural norm. Thus, we found ourselves on the road to Dalyat el-Carmel, a Druse village on the Carmel Mountain, which is a short drive from Haifa.The scenery didn't disappoint. With roads winding through luscious green hills dotted with grazing sheep and goats, with forests as tall and dense as any found in Europe or the US, and with vistas that take one's breath away, the drive from Tel Aviv was anything but boring. Rather, it was serene and it instantly made me feel as if we had entered some gorgeous painting.

Our plan was to arrive that evening at a tzimmer, (a one room cabin that can be rented just like a hotel room) owned by Souad Halabi, an enchanting Druse woman with kind features and sparkling eyes. We would spend the night there, have breakfast the next morning, and then explore the Druse village in the afternoon at our leisure. By the time we arrived in the village, the sun had just about gone all the way down, it had begun to rain, and we were unsure of our way. We made a phone call and Souad's son, Amir, who happens to be a doctor, went out of his way to come and fetch us from a gas station. He led us through a maze of winding streets filled with homes sporting huge arches, long, sweeping staircases, and open balconies on every side. 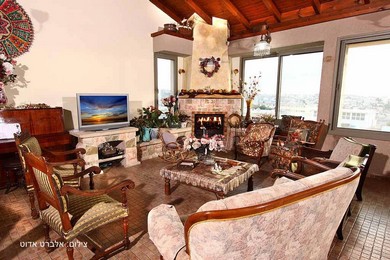 Eventually we turned into the drive of his mother's tzimmer, which is known as the “Estate Village” in the rose neighborhood. An absolutely lovely home rose up on the left. After parking, Amir greeted us in person and took us up a flight of stone stairs and past an immense courtyard dominated by a fountain. Behind the fountain lies Souad Halabi's Estate Village Tzimmers. There are three main rooms. Each is designed for a romantic couple and each is decadently furnished with expensive chairs, a very comfortable bed, and an island style wooden table top along one wall. On the latter, there were high quality chocolates, a 2006 bottle of cabernet sauvignon from the Golan Heights along with wine glasses, and Turkish coffee. Each room also offers an exquisite shower and a very generous jacuzzi bathtub. To say that we felt pampered is an understatement. 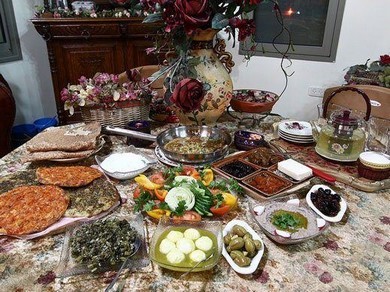 What can I say about the breakfast the next morning? For starters it's held inside a huge common room, decorated in the style of a lodge. Inside there is a fireplace, in which Souad quickly built a lovely fire, and there are comfortable chairs and couches situated around it. Wooden hutches and cabinets line the walls and a long table made for large family dinners is front and center when one walks in. On the table, Souad laid out a sumptuous feast, and she cooked everything herself. There were omelettes, pitas, various salads, olives, home-made jams, Druse pizzas, chai tea, and more. The food tasted wonderful and it simply never seemed to end. Even when completely full from the food, the offer for more is still on the table.Rates for such indulgence runs at a price that we considered more than reasonable. A room during the week is NIS 650 a night and if it's on the weekend, it's NIS 750. Breakfast is always included.From my perspective, I have been in many high class, boutique hotels and tzimmers where one can cater to the senses. The Estate Village does not disappoint in this area, but by far, it was Souad Halabi's family's hospitality and kindness that made the experience so exceptional. 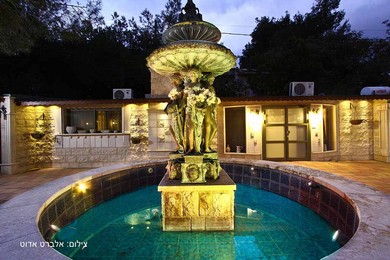 After bidding the Halabi family goodbye, we began our exploration of the market in Dalyat el-Carmel proper. It's seriously a tourist paradise. It’s full of goods from all over the world, and of course, there are all kinds of indigenous, Arabic goods like tobacco water pipes, which are known locally as Nargilot. There are also Druse restaurants everywhere. For those that are partial to ethnic food in general, just as Souad's breakfast was worth eating, the Arabic food in the restaurants is to die for. The truth is, whether one is a tourist from Europe, the US, or even if one is a native Israeli...Dalyat el-Carmel is an experience that is a must on any itinerary that includes travel in the north of Israel. For more information about rates see www.zimmeril.com/site.asp?site_id=2844